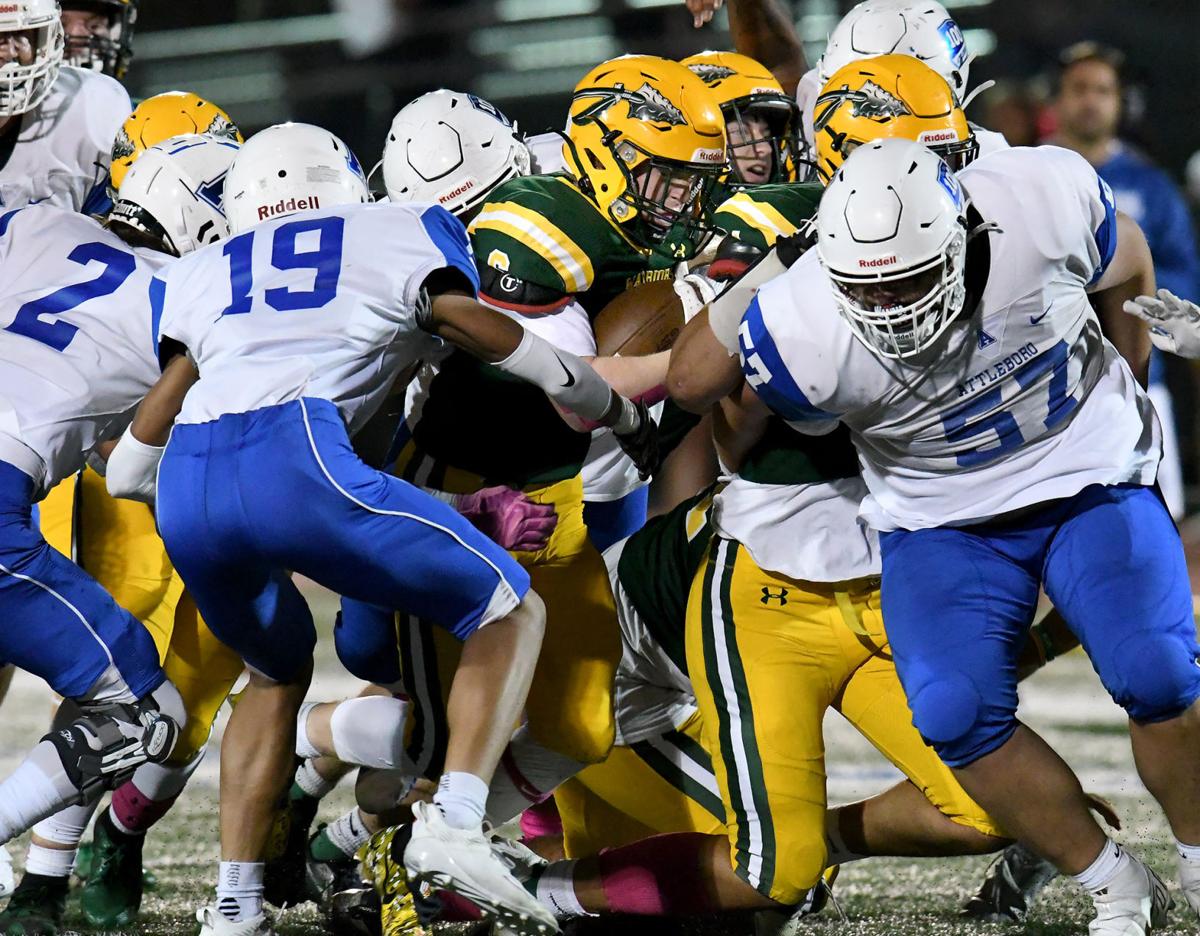 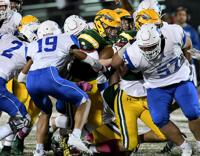 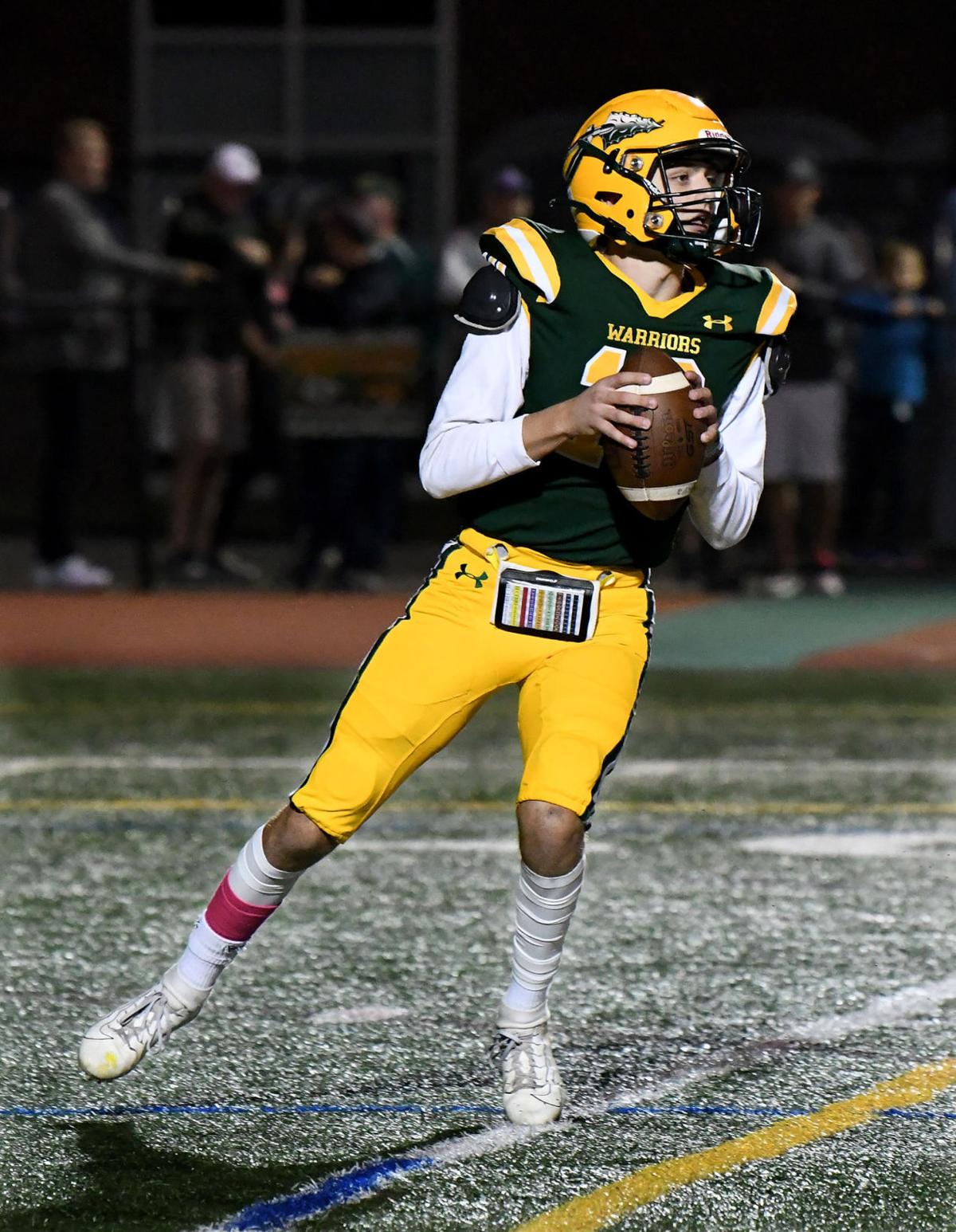 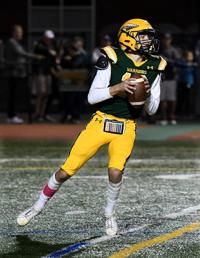 King Philip High School quarterback Charlie Grant looks for a target during an Oct. 8 game against Attleboro High in Wrentham.

King Philip High School quarterback Charlie Grant looks for a target during an Oct. 8 game against Attleboro High in Wrentham.

That is, the competitive strength of the Hockomock League from top to bottom — with his own Warriors beating previously unbeaten Milford, with Attleboro High taking unbeaten Franklin to within two points and a fumble away from an upset, with Tyler DeMattio not at quarterback for North Attleboro High, and with Foxboro High scoring points at will against everybody.

“We will not be overlooking Mansfield by any stretch,” Lee admitted. “There has not been a true dominant team — this year has been fun in the Hockomock League, kind of exciting in terms of from top to bottom, you can get beat by anybody. There have been so many games that come down to the fourth quarter. There’s no quit in these kids.”

The Warriors and Hornets have a lot to play for, with the Kelley-Rex Division title still at stake, and with first-place Franklin (3-0) meeting third-place Milford (2-1) Friday as well.

KP and Franklin are both 3-0 against Kelley-Rex Division competition, while Mansfield is in second place at 2-2.

Elsewhere in the Hockomock League, Foxboro (6-1) can clinch the Davenport Division title with a win at Oliver Ames. North Attleboro (3-3), still with an eye on a home game for the Division 3 playoffs, visits Stoughton. Attleboro High (1-5) is clinging to an outside chance for a playoff spot at Taunton.

Among other area teams, Norton High will try to extend its unbeaten streak to seven games with a Tri-Valley League game at Dover-Sherborn. In the South Coast Conference, Dighton-Rehoboth (1-5) visits Apponequet, while Seekonk (2-4) travels to Bourne.

On Thursday, at McGrath Stadium on the campus of Bishop Feehan, the Shamrocks (6-1) are destined for the Division 2 playoffs, and will host a Catholic Central League game against Austin Prep with a 6 p.m. kickoff.

“It’s been strange,” Lee said of the Warriors’ two-week absence from competition, reviewing game film, reassessing the strengths and weaknesses of his Warriors, and allowing for physical issues to remedy themselves. “We couldn’t find a game and it ends up, maybe it’s for the better. At the same time, we played good (against Milford) and you want to build off of that.”

“Any euphoria from that (beating Milford on a last-minute Matt Kelley field goal) is gone and now we’re looking at Mansfield, a rivalry game, and you know what you’re going to get. Here we go, going against a team that’s always tough, always super well-coached.”

Both KP and Mansfield are more concerned with maximizing their strengths.

“KP is very good at what they do: grind away on the ground, make timely passes, win the battle of field position and play great defense,” Mansfield coach Mike Redding said of the Warriors, with the outcome having Division 2 playoff implications for both, perhaps the first of two meetings.

“If we steal a win on the road Friday, we may actually get two home games in the tourney, so there’s a lot on the line,” Redding added.

Of primary concern for Redding and the Hornets is to play a good first half — they trailed Stoughton 14-0 in the first half, held just a 3-0 lead after 24 minutes against Taunton, and were losing 14-7 at the half against Franklin and North Attleboro.

“It would help a lot if we could score early and get them (KP) out of their ball-control style and make them play from behind.,” Redding said. “Our (run-pass) balance helps on offense — they have to defend our run game and pass game.”

KP has allowed the second-fewest points (105) in the Hockomock League, while QB Charlie Grant has thrown six TD passes and rushed for three more, while running back Ryan Gately has scored six TDs. The number of two-way players has been a concern for Lee. “We’re pretty thin, but we didn’t have a major injury, so at this point of the year everybody is dinged up.”

Lee thinks back to two weeks ago when Milford was considered to be the top team in the Hockomock League, or last week when Franklin was a favorite. KP and Mansfield have now moved into that conversation.

“It comes back down to that we have plenty to look forward to,” Lee continued. “It’s been a weird season. We haven’t looked at playoffs, rankings, any of that stuff. If we beat Mansfield, that would be humongous for us. But, if we lose, we might not make the playoffs.”

Redding and the Hornets know the importance of a sixth win and a home playoff game.

“We’ve had our moments of playing great football,” Redding insisted. “But, we’ll need 48 minutes of them Friday night at KP.”