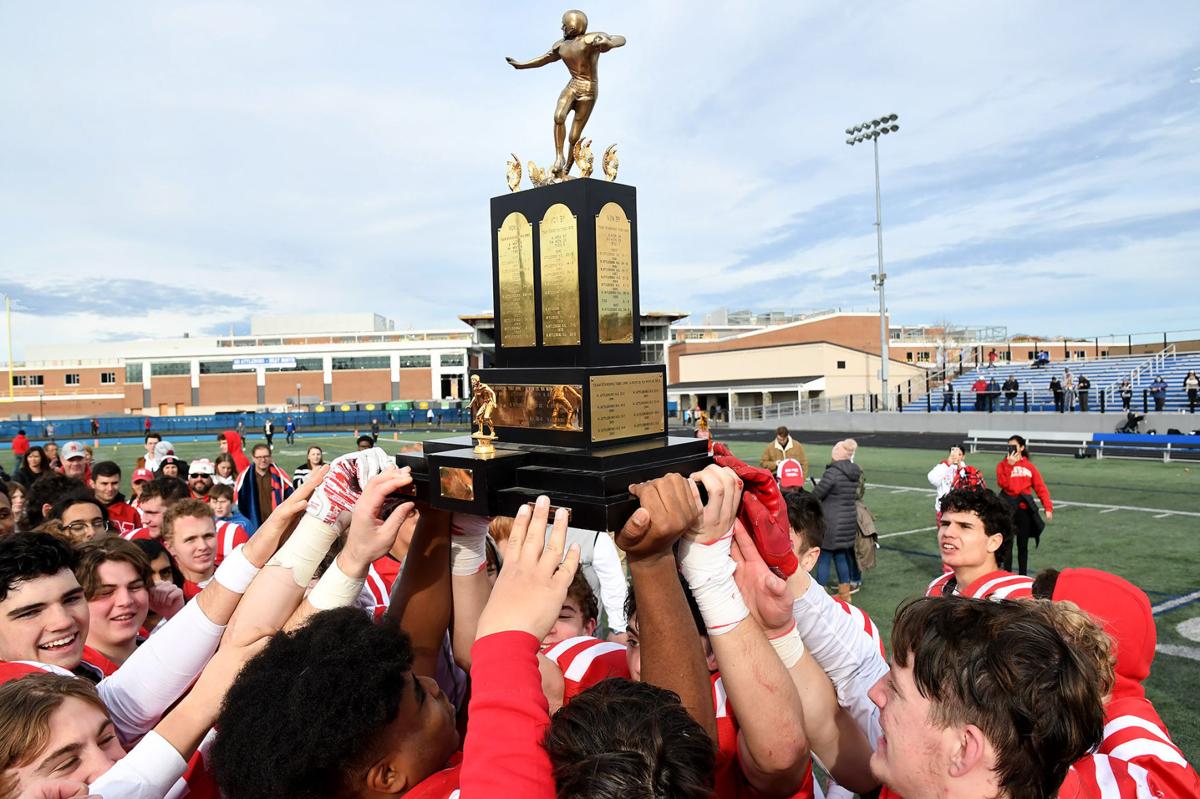 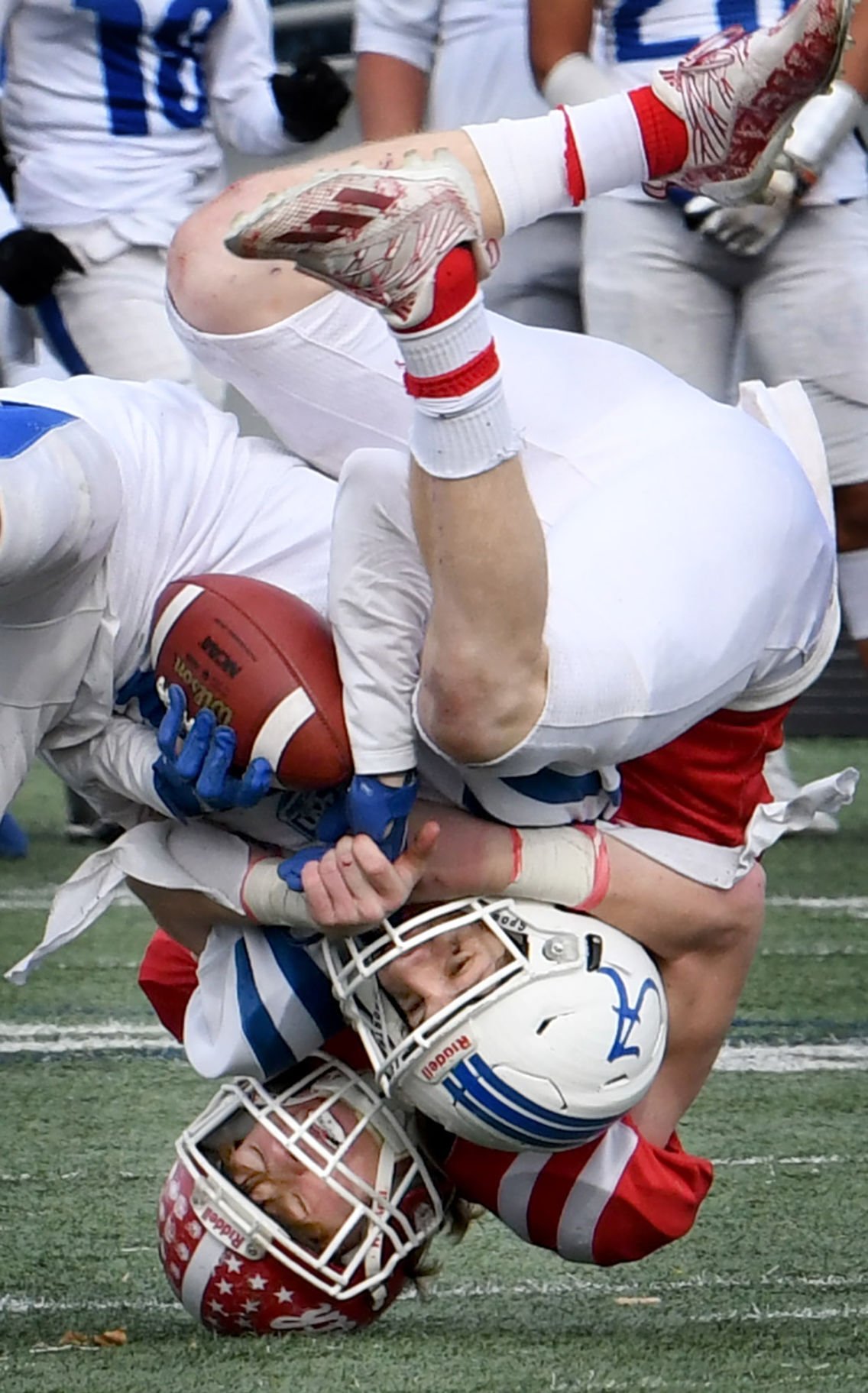 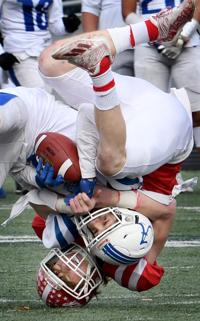 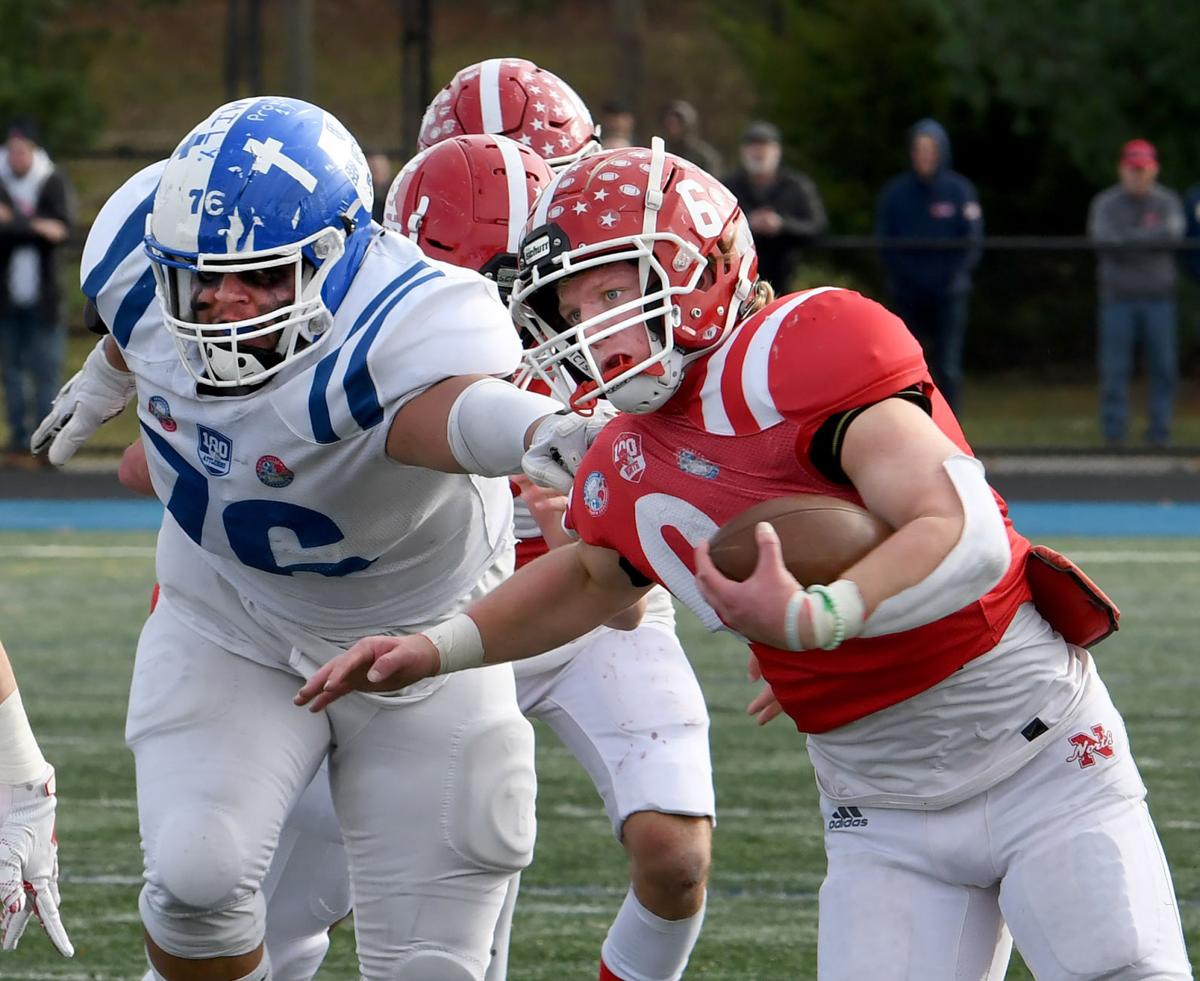 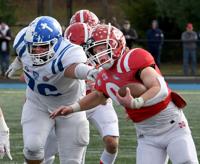 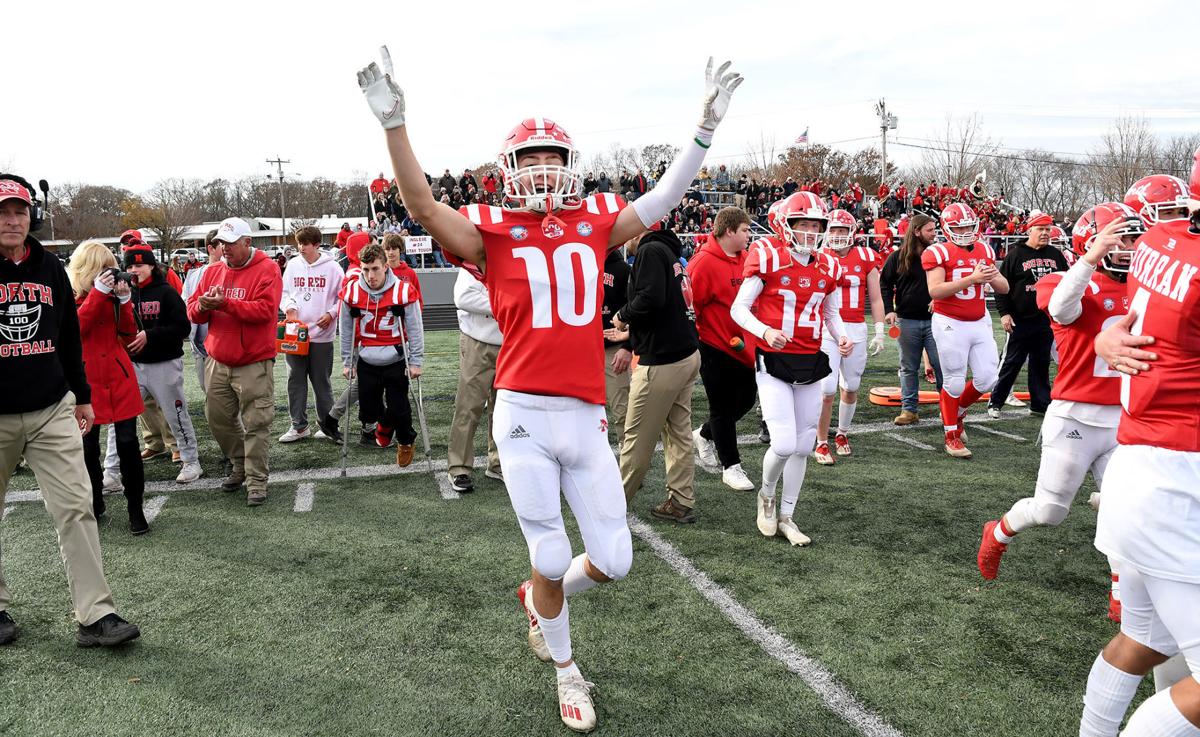 North Attleboro Highs Gavin Wells (10) and teammates celebrate their 14-6 victory over Attleboro High as the final seconds tick down in the 100th Thanksgiving Day meeting between the two schools Thursday at Attleboro High. 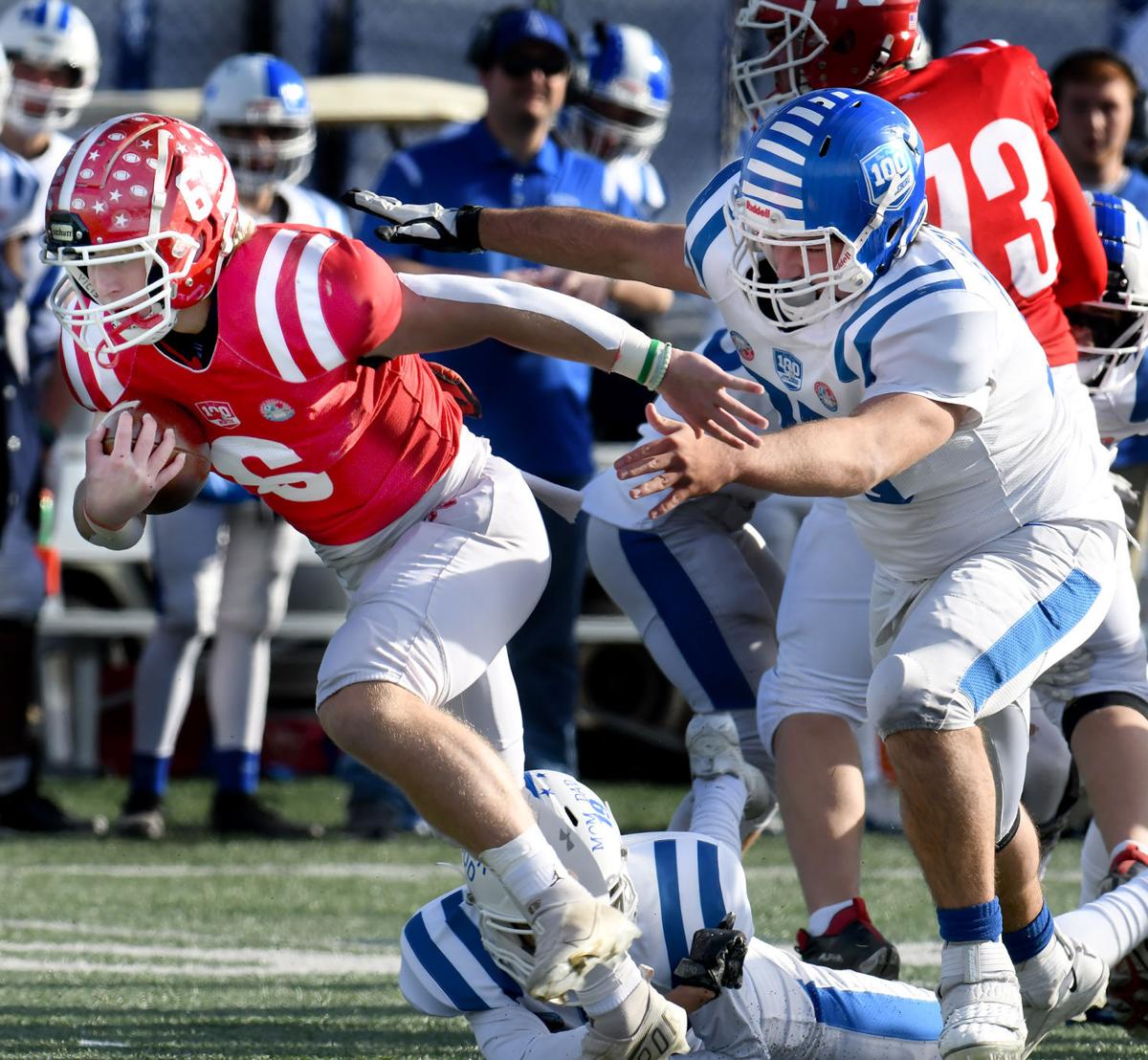 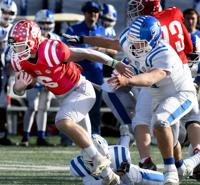 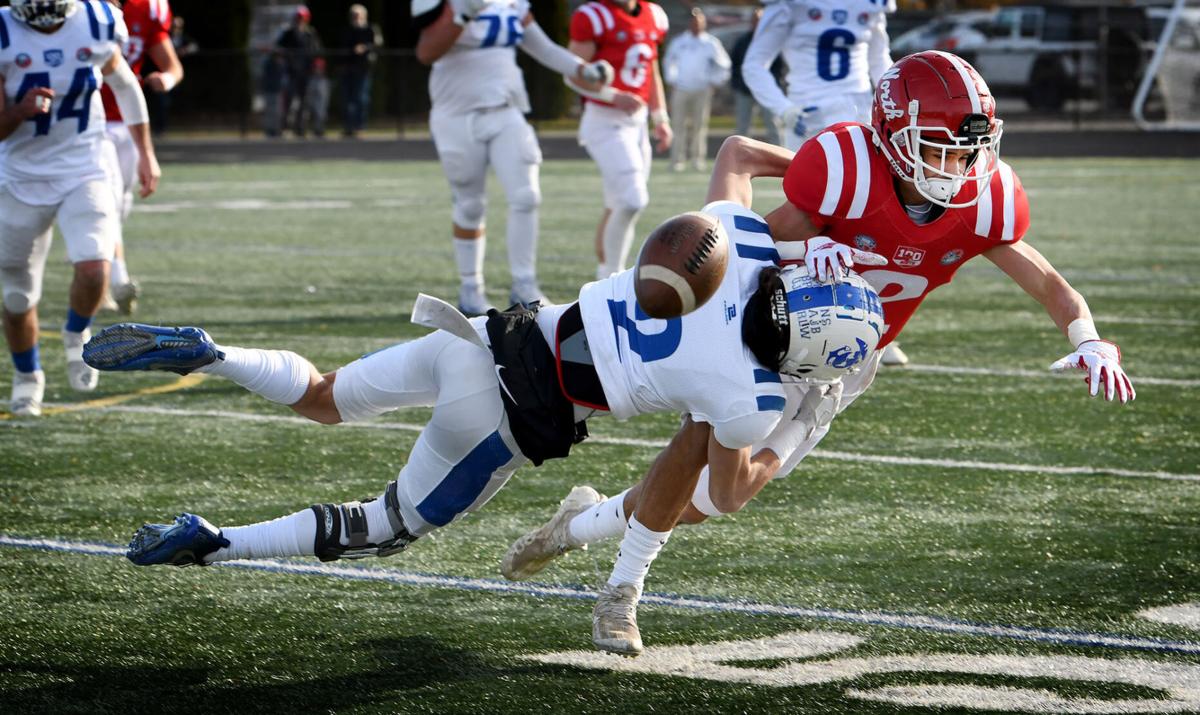 North Attleboro Highs Gavin Wells (10) and teammates celebrate their 14-6 victory over Attleboro High as the final seconds tick down in the 100th Thanksgiving Day meeting between the two schools Thursday at Attleboro High.

ATTLEBORO — The “Hilda” is in the arms of the Rocketeers.

Senior tailback Tyler DeMattio rushed for 126 yards on 14 carries, including TD runs of 44 and eight yards, while senior running back and Rocketeers’ MVP Tyler Bannon added 80 yards and guided a Big Red defense that limited Attleboro High to just over 100 net yards of offense.

The result: The MIAA Division 3 Super Bowl-bound North Attleboro High football team earned a 14-6 victory over the Bombardiers Thursday at Tozier-Cassidy Field in the 100th renewal of the Thanksgiving Day rivalry.

“That was probably the toughest game that we’ve played in the last month and a half,” Bannon said after North Attleboro protected the lead after scoring on its second series of the game, keeping the Bombardiers scoreless on five second-half series.

It wasn’t until DeMattio rambled for runs of 31 and eight (TD) yards with just over two minutes remaining that the game was decided. Even then, it required a Rocketeer interception by senior Gavin Wells at the North 45-yard to postpone a last-gasp Bombardiers’ bid for a game-tying TD to secure victory No. 8 of the season.

“This was exactly what we anticipated,” North Attleboro coach Don Johnson said of the four quarters of drama, which included 19 penalties whistled against both teams for 165 yards. “It was the same as 2017 (North’s last Super Bowl appearance). We are beat up (after beating Billerica Saturday), we are tired and you have less days to prepare.

“Attleboro is a big, strong, physical and good team — we knew we’d have trouble with them no matter when we played.”

“We played hard the entire game, it was just one play here or there,” Attleboro coach Mike Strachan said.

The Bombardiers had a 73-yard TD pass from Matt Harvie to Salviati nullified by a holding penalty. They also had a potential interception in the second quarter ruled in the Rocketeer receiver’s favor; missed a conversion kick; were assessed a roughing the kicker penalty to keep North’s fourth series of the first half alive and had a personal foul penalty assessed to take the Bombardiers away from midfield on their second drive of the second half.

And yet, AHS did enough defensively to confound the Rocketeers as Ayden Ramirez intercepted two North passes and Ethan Lako another. Ramirez took away an air ball at the AHS 25 to end North Attleboro’s first series of the game and another at the AHS 45 to end North’s second series of the second half, while Lako picked off a pass at the AHS 2-yard line one play before halftime.

“We did some things really well,” Strachan said of limiting North to just 31 rushing yards in the first half, minus DeMattio’s 44-yard TD run and to just one second half completed pass. “We did a good job up front, we just needed that one more play.”

The Bombardiers started first half drives at the 42-, 27- and 38-yard lines and then went scoreless through the second half despite some favorable field position to start sets at the 25-, 27-, 31-, 29- and 22-yard lines.

“North Attleboro is a very good football team and they made some plays when they had to make them,” said Strachan, whose Bombardiers concluded their campaign at 4-6.

The Bombardiers drove 73 yards on 15 plays, consuming better than eight minutes off of the clock to score when Rivera scored from five yards out just 1:32 into the second quarter. However, the potential game-tying conversion kick went wide.

That was because a 10-yard holding penalty on the Bombardiers on their first series of the third quarter, personal foul penalty took them out of favorable field position on their second drive where a botched double reverse play resulted in a 15-yard loss on third down.

North junior defensive lineman Zach Gallagher put a stop to AHS’ fourth drive with an 11-yard sack on second down, moving the ball back to midfield. Wells then plucked off an AHS pass four plays into the Bombardiers’ last series, which began with 1:22 remaining on the clock.

“That might be the ugliest win in the history of the series,” Johnson said of the Rocketeers’ 12 penalties for 100 yards, along with four sacks, two fumbles and four turnovers. “But we made enough plays to win. You take away DeMattio’s two long runs there and it’s an even game, but he’s been a difference-maker all year.

“We talked about what we did to get here,” Johnson added of his halftime chat with the Rocketeers, who won their sixth straight since a loss to Foxboro. “We really played tough all year long against some really good teams. We hung together and we stayed together. This is a very competitive group.”

Gallagher’s sack paved the way for North’s second TD. The Rocketeers took possession of the ball at their 49-yard line and on the first play, Bannon blasted his way for 14 yards. Two plays later, DeMattio waltzed untouched around the left corner for his second TD.

It did not take long for North to put points on the scoreboard on its second series of the game, a four-play series that began at the Rocketeers’ 43-yard line. Bannon converted a third down with a 5-yard run to the AHS 44 and DeMattio went the remaining distance a play later.

“Everybody has relatives and neighbors, several generations who have been through this game for decades,” Johnson said of the storied rivalry between the Rocketeers and Bombardiers. “There’s a personal connection to this game for everyone. People might forget what year was a Super Bowl year, but everybody is going to remember what happened on Thanksgiving Day.”