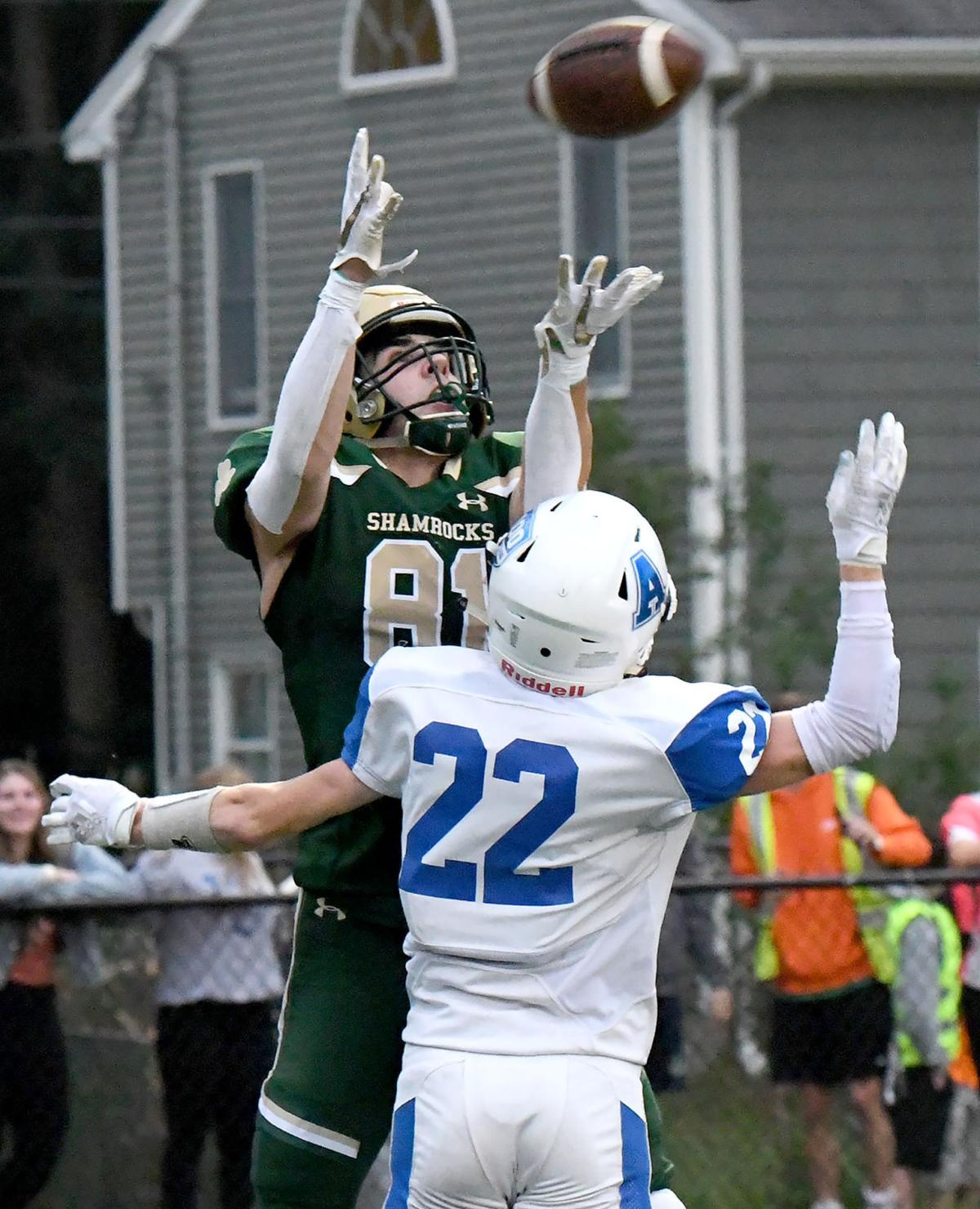 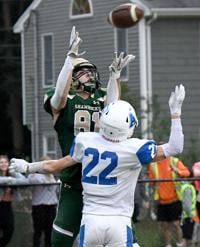 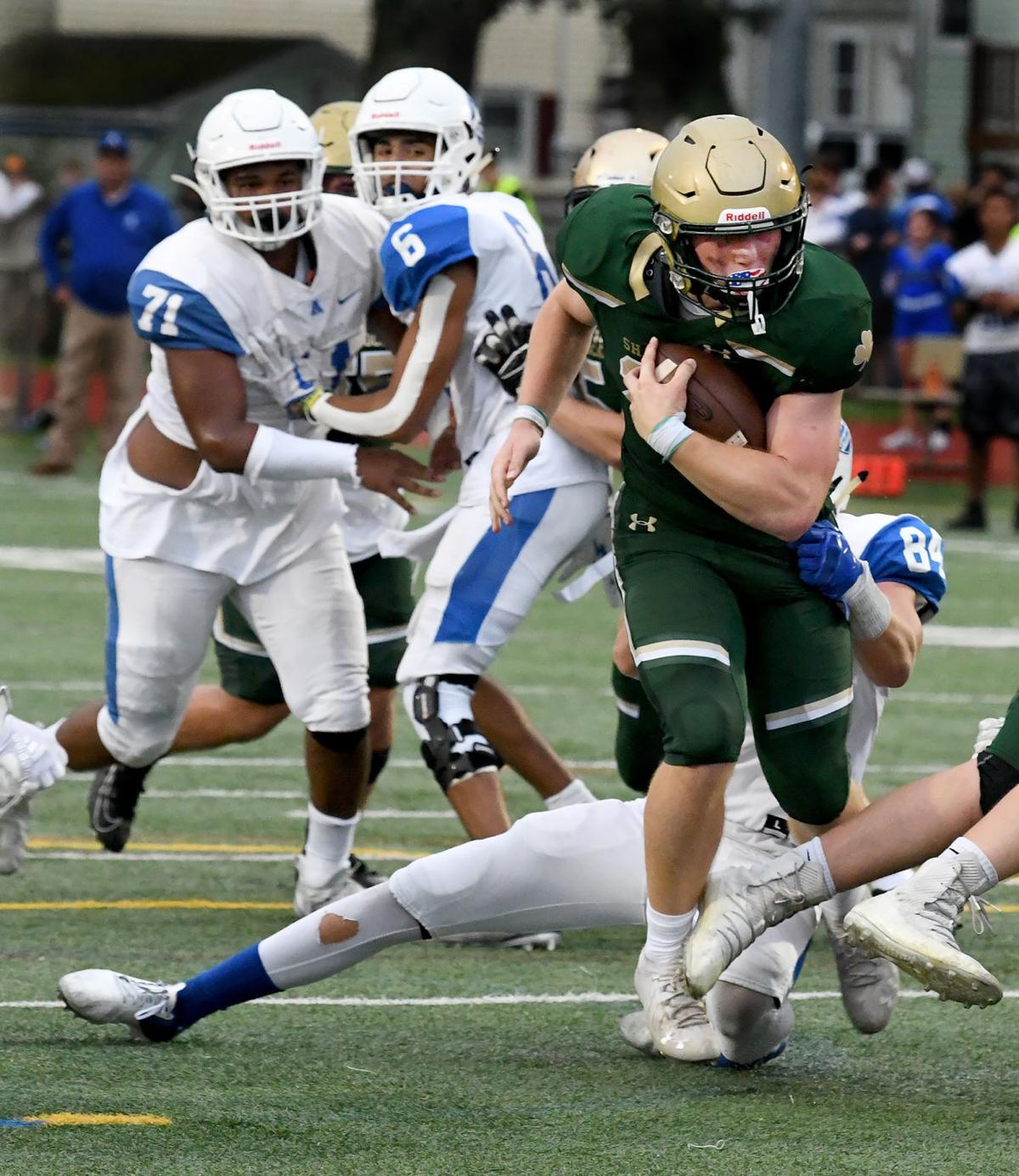 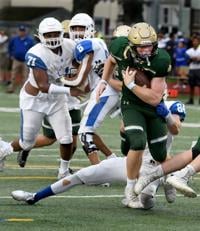 Bishop Feehan High running back Nick Yanchuk breaks free against Attleboro High to carry the ball down near the goal line Friday night. 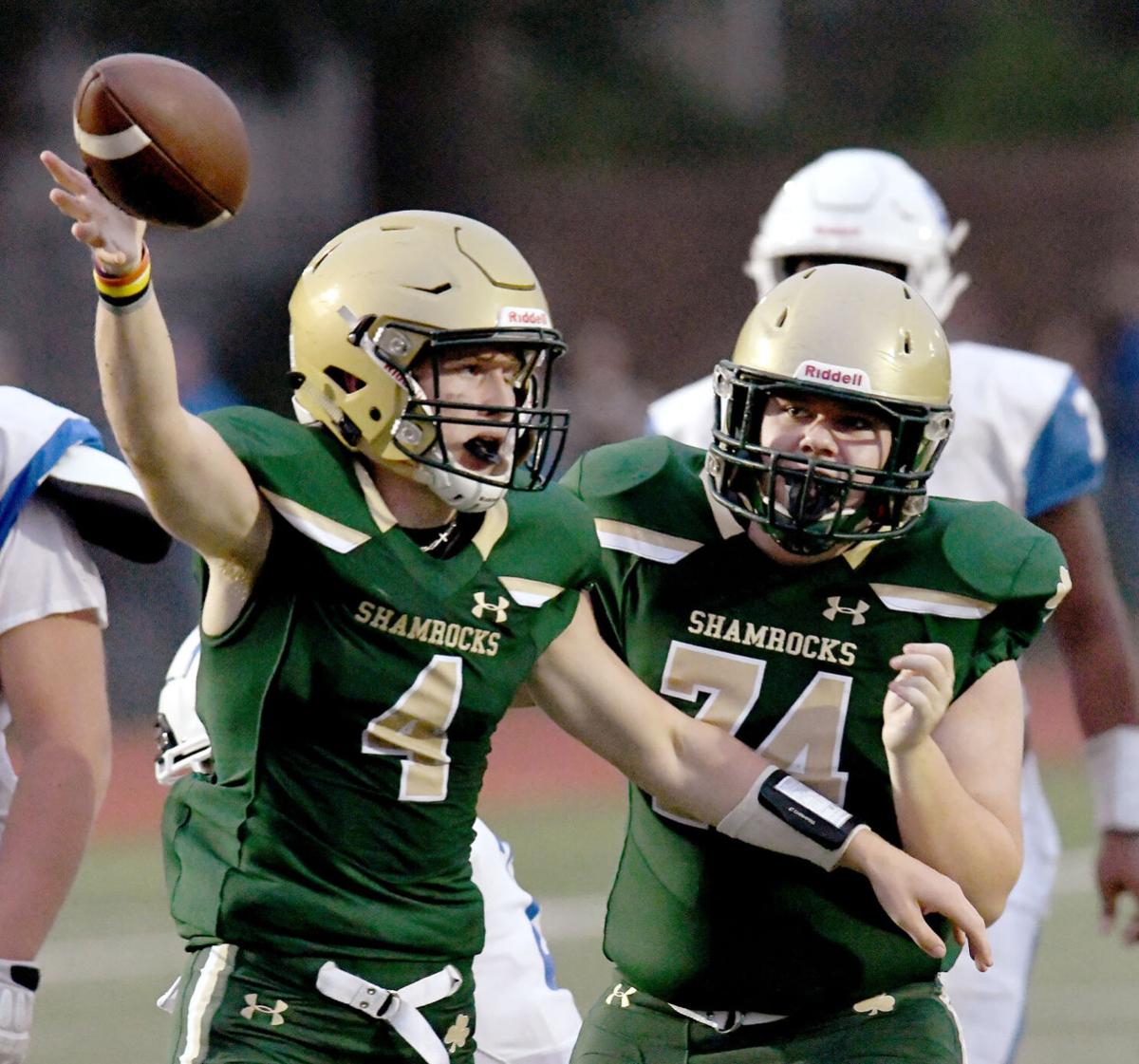 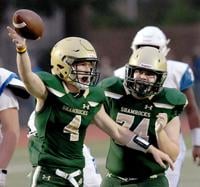 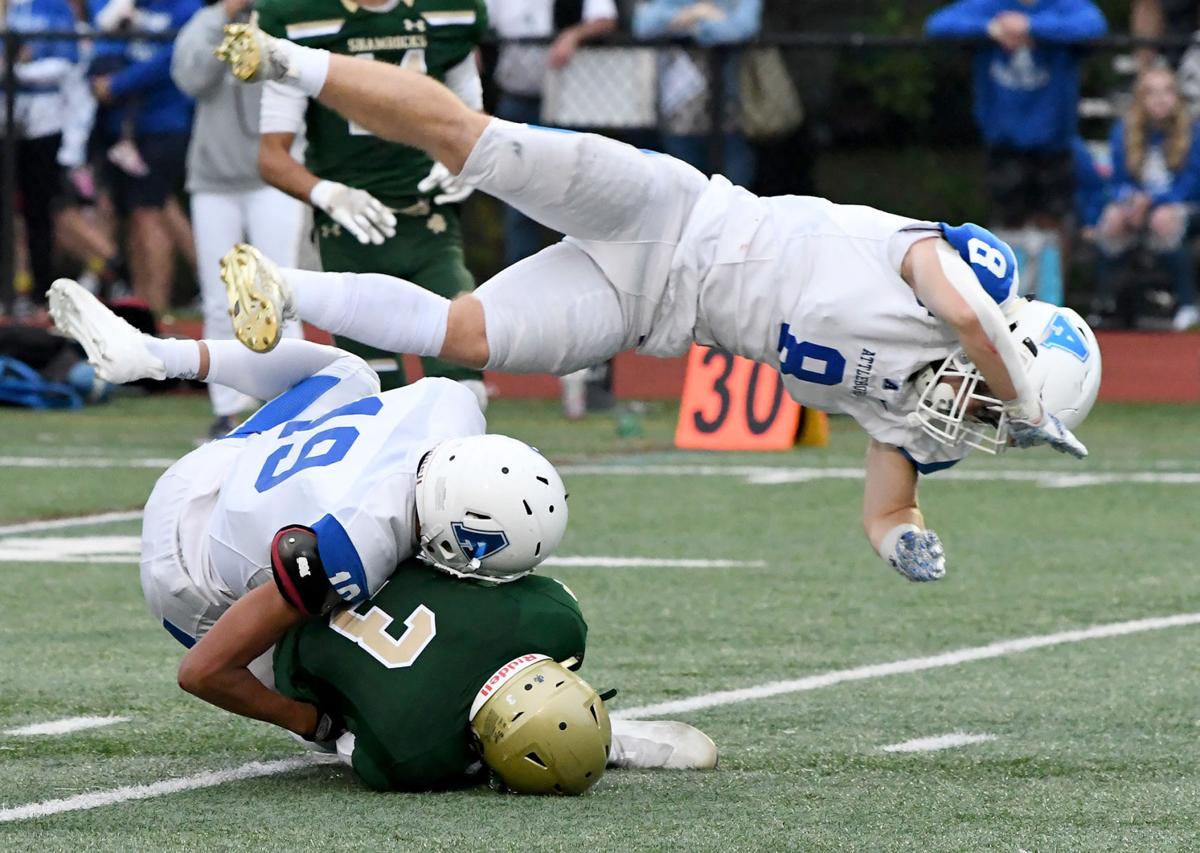 Bishop Feehan High running back Nick Yanchuk breaks free against Attleboro High to carry the ball down near the goal line Friday night.

ATTLEBORO — “The City Game” was never in jeopardy for the Bishop Feehan High Shamrocks.

The Shamrocks were so in control of the line of scrimmage on both sides of the ball that the Bombardiers crossed midfield just once (and no further than the Bishop Feehan 46) on five offensive series during the first half in falling behind 27-0.

“That’s a good football team,” AHS coach Mike Strachan said of the Shamrocks, who captured the Elks Club Trophy to tie the all-time series at 21-21-1. “They won the game up front.”

The Shamrocks had the trump card on the field in junior Connor McHale, who intercepted a pair of Bombardier second-half passes and hauled in a 47-yard scoring strike from Crump on Bishop Feehan’s first series of the second half.

Senior Kaiden Murray netted 60 of his 76 rushing yards during the second half for Attleboro, while Hayden Hegarty hauled in a 39-yard pass from Blake Garzaro to advance the ball to the Bishop Feehan 38-yard line on the first play of the fourth quarter.

Otherwise, the Shamrocks did not allow an AHS intrusion inside their own 28-yard line.

“We dropped passes (six) and we turned the ball over (three times),” Strachan said. “That’s just not characteristic of our kids. No doubt about it, Bishop Feehan was the better team.”

And for good measure, Bishop Feehan junior linebacker Dante Bruschi recovered a Bombardier fumble to end Attleboro’s second series of the second half and returned the ball 26 yards, while senior defensive end Matt Pequeneza had a sack for a six-yard loss in the second quarter.

The Bombardiers were able to notch just one takeaway on an interception by Ethan Lako at Attleboro’s own 31-yard line to end Bishop Feehan’s second series of the game.

“We had a lot of kids step up and make plays, this is a total team,” Shamrock coach Bryan Pinabell said. “We like to think that we pride ourselves on playing disciplined football.”

There was no margin for a Bombardier comeback in the second half. Three plays into the Shamrocks’ first series, McHale was all alone deep on the left side and Crump aired him the ball for six points, Brett McCaffery then lacing the fourth of his four conversion kicks through the uprights.

Then the Shamrocks took the ball away from the Bombardiers on three consecutive series.

Bruschi recovered an AHS fumble and ran with it 26 yards out to the Bishop Feehan 44-yard line.

Three plays into the next Bombardier set, McHale plucked off a pass at the AHS 49.

And five plays into the next AHS possession, McHale swiped the ball in the end zone and returned the ball 53 yards to the Bombardier 43-yard line.

The Shamrocks produced points on four of their five first half drives, marching 70, 60, 32 and 43 yards for points.

Four plays into the game, Yanchuk broke two tackles and scooted 58 yards for a touchdown.

Six plays into their third series, Bruschi finished off the 60-yard drive behind a block by right tackle Eddie Cinelli for the touchdown. In that drive, Crump completed consecutive passes of 15 yards to Matt Saunders and 20 yards to McHale.

A dazzling 25-yard punt return by McHale presented Bishop Feehan with the ball at the AHS 32-yard line to begin their fourth offensive set. Yanchuk blasted 14 yards to the AHS 15 for a first down, then 6-foot-5 senior tight end Rob Pombriant won a jump ball for a reception and 16-yard TD toss from Crump.

Shamrock junior defensive lineman Tristen Upton set up the next Shamrock score by hammering down an AHS third down pass, then Crump bolted 21 yards on first down. Five plays into that Bishop Feehan offensive series, Yanchuk turned the left corner for a 9-yard TD run.

By halftime, Yanchuk had amassed 117 yards, while Crump had completed five of six passes for 73 yards.

“The running game was good, Aidan (Crump) had a great game and the line did a fantastic job, not to mention our fans — what a great atmosphere,” Pinabell said.

The Shamrocks next have a Catholic Central League game Friday at McGrath Stadium against St. Mary’s of Lynn. The Bombardiers will be on the road to New Bedford for a non-league game.