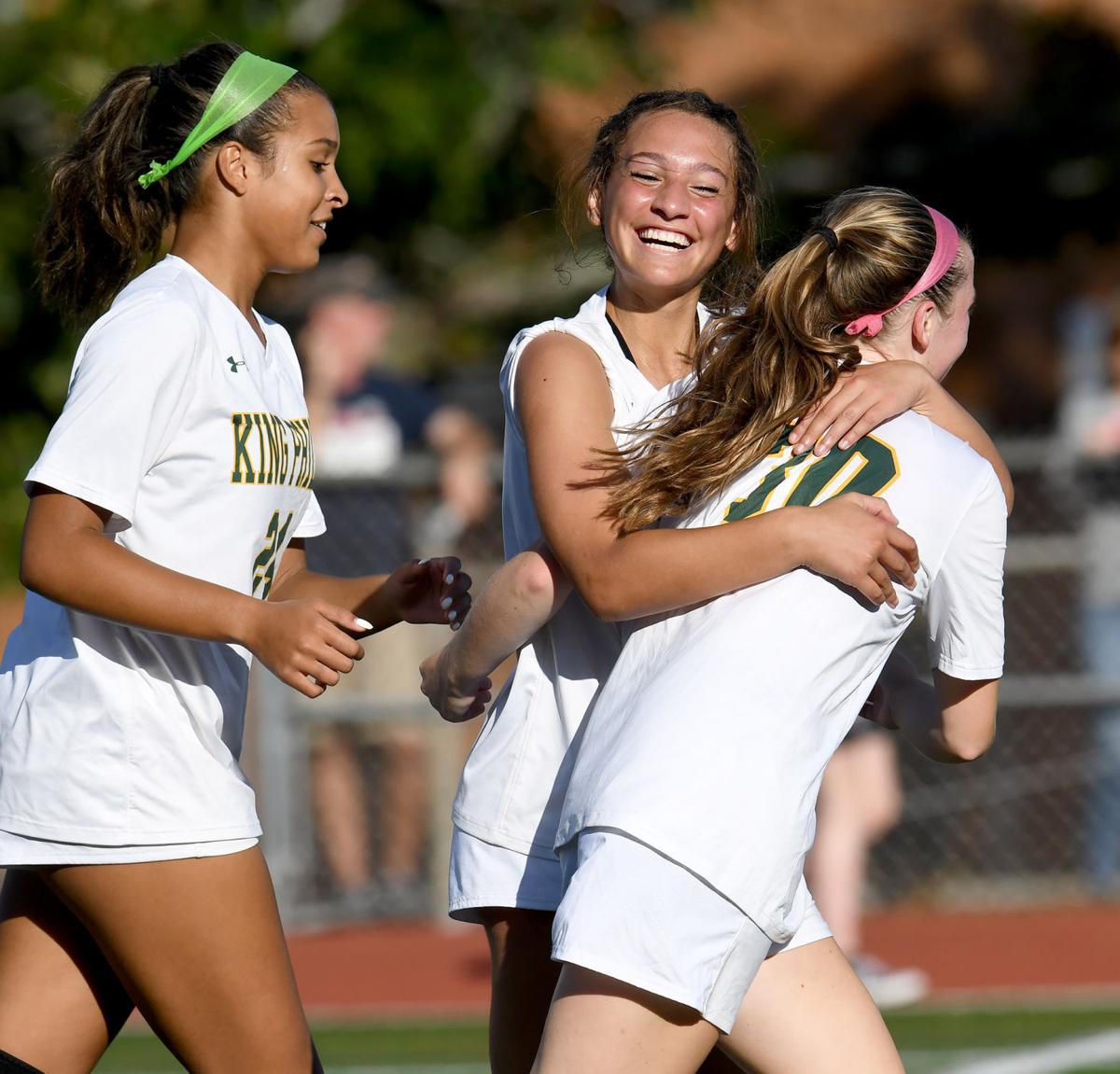 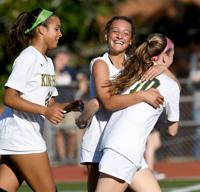 KP High’s Addisyn Lamothe-Vaughn hugs teammate Dani Lomuscio after Lomuscio scored the second goal for the Warriors in their match against North Attleboro High in North Attleboro Tuesday. At left is Mikayla Thompson. 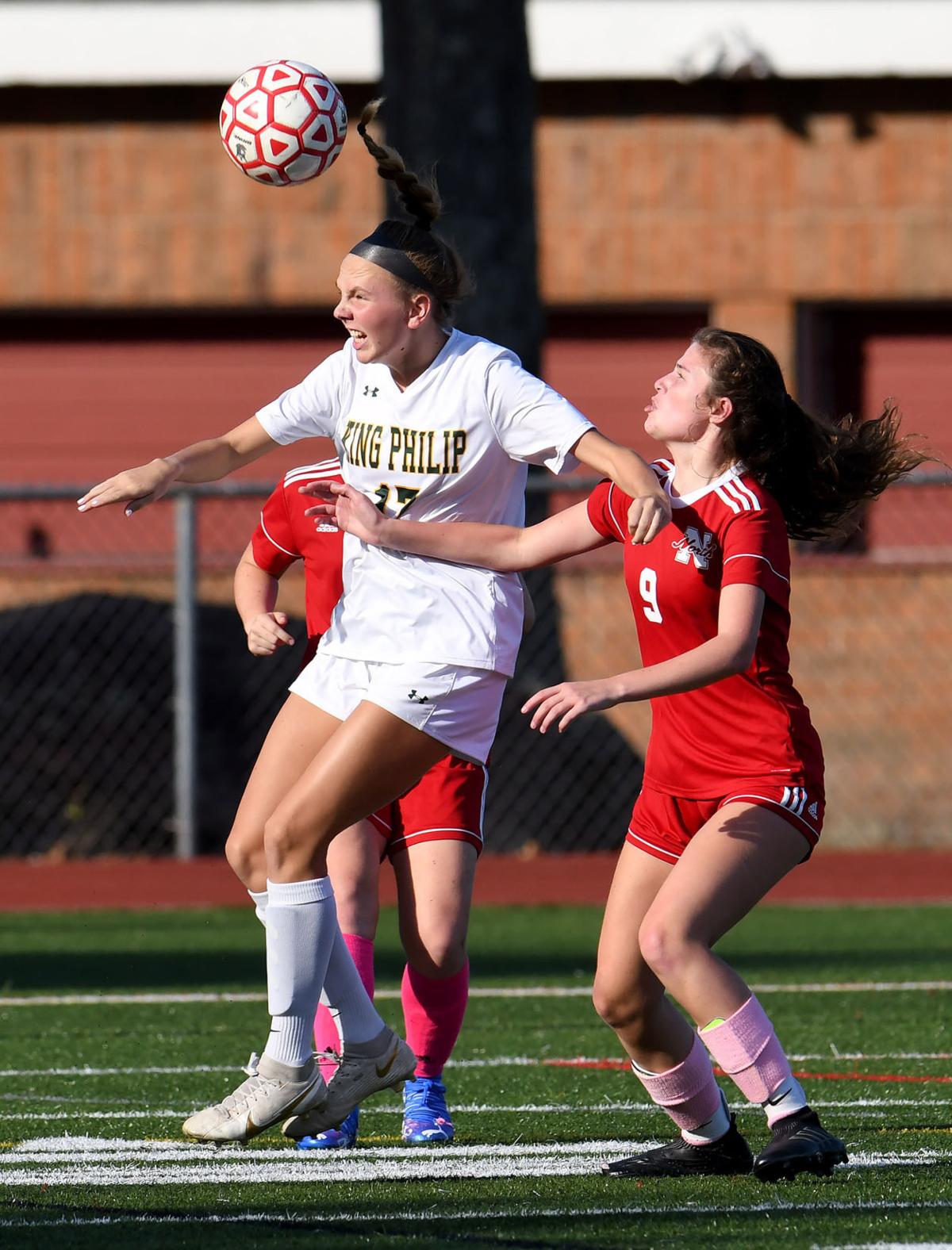 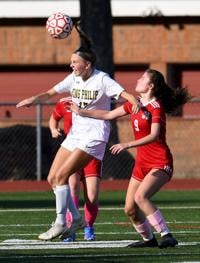 KP High’s Addisyn Lamothe-Vaughn hugs teammate Dani Lomuscio after Lomuscio scored the second goal for the Warriors in their match against North Attleboro High in North Attleboro Tuesday. At left is Mikayla Thompson.

With sophomore Heidi Lawrence tallying twice during the first half of play, the Warriors ran past North Attleboro 3-1 Tuesday in a Hockomock League match at Raymond Beaupre Field.

“We had to re-focus, get our game back on,” KP coach Gary Pichel said of the Warriors, who controlled the pace of play with their speed, constantly putting pressure on North’s midfield cast for ball possession and the Rocketeers’ defense in probing for scoring chances.

Lawrence delivered the go-ahead goal for KP (8-3) in the sixth minute of the match, taking a through ball from Dani Lomuscio.

Lawrence netted her second goal in the 37th minute, the Warriors’ third tally, on a play out of the left corner orchestrated by Ella Pisani. Lawrence took control of the ball, beat a North defender and hard-charging North goalie Maddie Ferrin for some space to find the back of the net.

KP had gained a two-goal margin in the 30th minute. Lomuscio scored on a drive inside the penalty-box area to the top-right corner of the North net on a nifty feed from senior captain Morgan Norrman, who tiptoed around a North defender.

“Against Franklin, we had the opportunities (to score), but we just missed,” Pichel said of losing to the Panthers and losing a one-goal lead in falling to Oliver Ames. “That’s part of the stretch that you go through when you’re just not concentrating or focused enough.”

KP ranked among the top five in the Hockomock League in both goals scored (36) and fewest goals allowed (11). That was evident through 60 minutes as North didn’t have a corner kick until Emma Pratt laced a ball out of the left corner in the 71st minute that resulted in Brayden Rice banging in a header while stationed at the right post.

North’s only threats during the first half were direct kicks taken by junior defender Haley Sinacola, in the 35th and 38th minutes, that were both handily grasped by KP goalie Lauren Casper (nine saves).

KP’s Rihanna Mason took away another North partial breakaway bid and a Pratt pressure, while Rylie Wesley denied a long-ball bid atop the penalty-box area.

Pratt created a partial breakaway for North in the 56th minute that KP’s Rachel DeFlaminis defended, and Rice launched a testing long ball in on Casper two minutes later.

“Their speed was tough, they’re fast,” North coach Bill Wallace said of KP playing balls up the middle and from the flanks. “We went to the ball better in the second half, we subbed more to get fresh legs in there. You’re down 3-0 at the half, so you want to win the second half.”

KP senior captain Brooke Mullins nearly finished off a solo breakaway in the 33rd minute, and within the first 12 minutes of the second half the Warriors were in an all-out attack mode — senior captain Paulina Baczkowski having a one-timer at the left post at 42; Lawrence and Norrman creating a strong pressure at the left post again at 44; Addisyn Lamothe-Vaughn testing Ferrin with a strong ball off the right side at 49; Ilah Weiblen nearly finishing off a Baczkowski cross at 50; and Pisani labeling a drive on net at 53.

“We did that, re-focus very well in the first half,” Pichel said. “I was happy with what we were doing.”