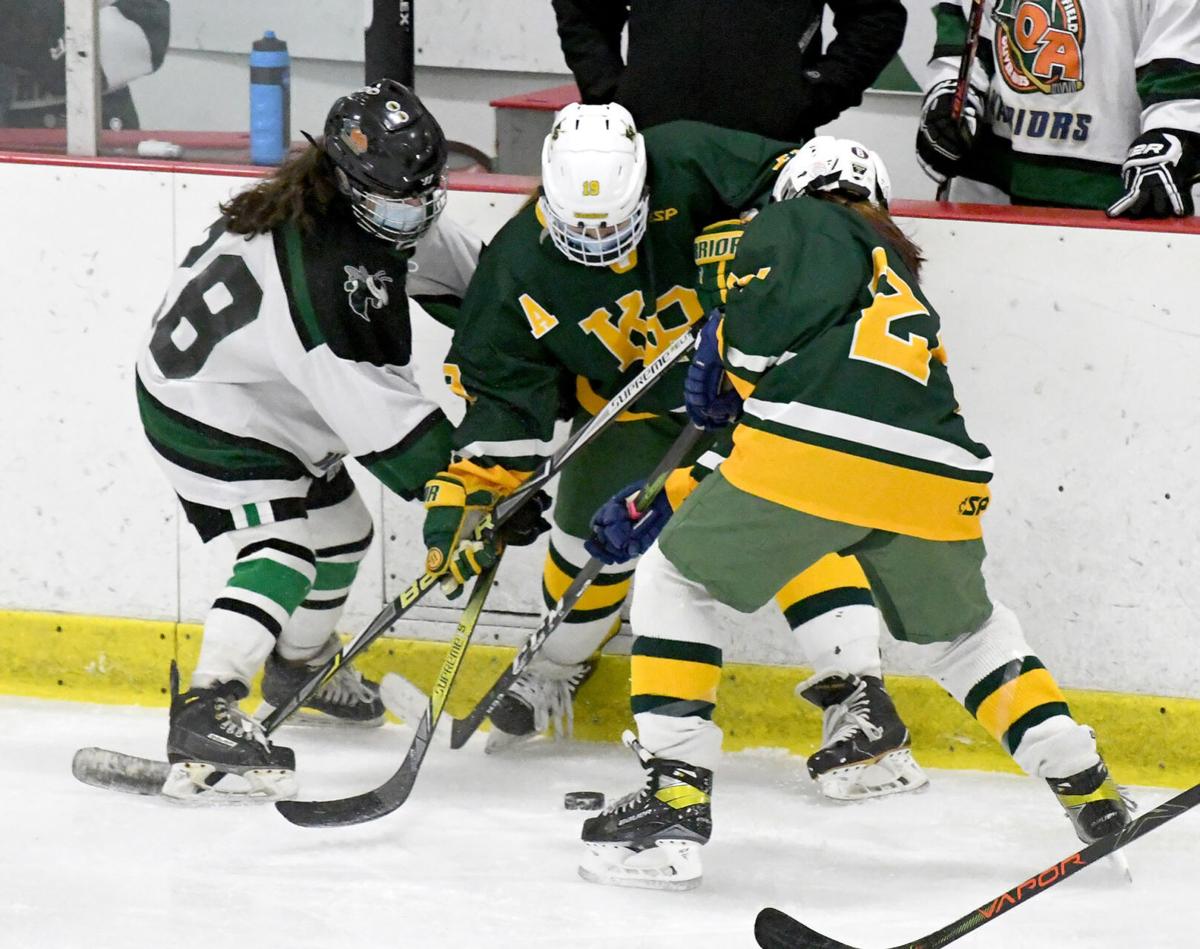 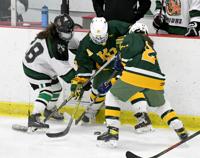 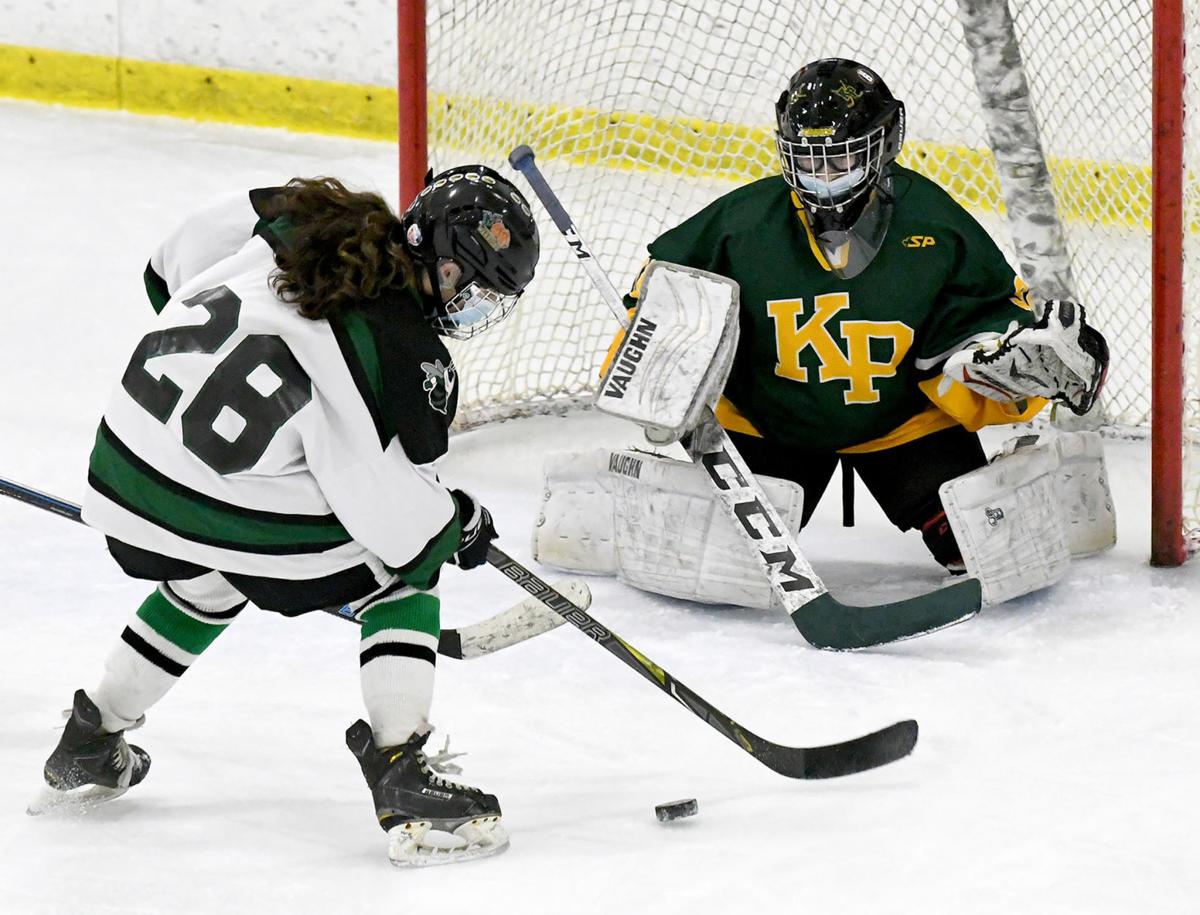 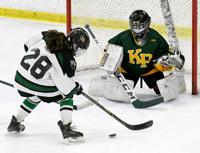 FOXBORO — Freshman Kelly Holmes has already made an impact in her first two games for the King Philip Regional High girls’ hockey team.

After scoring the tying goal in the final minute of play in the Warriors’ season opener against Foxboro-Mansfield Friday, Holmes scored the winning goal with 17 seconds left in regulation at Foxboro Sports Center Saturday as KP won 3-2 in a Hockomock League game.

The Warriors a two-goal first period deficit as they were held scoreless by Foxboro-Mansfield goalie Jess Widdop over the first 30 minutes.

“She’s a very special player,” KP coach Ken Assad said of Holmes, whose second goal of the game won it. “She has a great shot and the ability to score from anywhere on the ice.”

Goals by Cierra Doherty (at 2:16 from Melissa Shanteler) and Cam Shanteleter (at 5:00 from Maeve Anastasia and Kylie O’Keefe) had put Foxboro-Mansfield in the lead.

After that, King Philip goalie Mallory Johnston (18 saves) blanked Foxboro-Mansfield the rest of the way, including a second period power play by making three strong saves.

“We have some strong forwards, kids who can score,” Assad said. “With Kelly out there, we can play her in any situation and good things happen.”

Holmes ignited the KP comeback by scoring the first of the Warriors’ three third period goals. A power play goal by Jen Daniels in the fifth minute knotted the score.

Foxboro-Mansfield (0-1-1) hosts Bishop Feehan Monday at 7:30 p.m. in Foxboro, while KP returns to the ice Wednesday against Franklin.

CAMBRIDGE – Goalie Avery Blanchard turned aside 25 shots, including a half-dozen big saves, but the Shamrocks came up short in its Catholic Central League loss.

Matignon overcame an early one-goal deficit with two first period goals and then added another pair in the second period.

Sydney Spellman gave the Shamrocks their first lead at 2:45 of the first period with Molly Braga assisting. Bishop Feehan (1-2) returns to the ice Monday at 7:30 p.m. at Foxboro Sports Center against Foxboro-Mansfield.

CAMBRIDGE -- The Shamrocks came up one goal short in their bid to upend Catholic Central League power Matignon.

Brady Vitelli (at 14:21 from Aidan Scanlon and Jake Noel) tied the game in the first period for the Shamrocks. Tom Franziosa (at 5:42 on a powerplay from Kevin Barrera) put Bishop Feehan in front early in the second period.

FOXBORO — The Lancers made their Tri-Valley League season debut under new head coach Mike Donovan but watched Dover-Sherborn scored four goals in the second half to pull away.

Max Sherman put Norton in front in the 11th minute with Mike Whalen and Jake Braga assisting. Dover-Sherborn gained the equalizer in the 14th minute and then took the lead with 30 seconds left in the first half after a faceoff in the attacking zone. Senior goalie Collin Lyons totaled 40 saves for Norton, which returns to the ice Wednesday in Franklin for a TVL game against Bellingham.