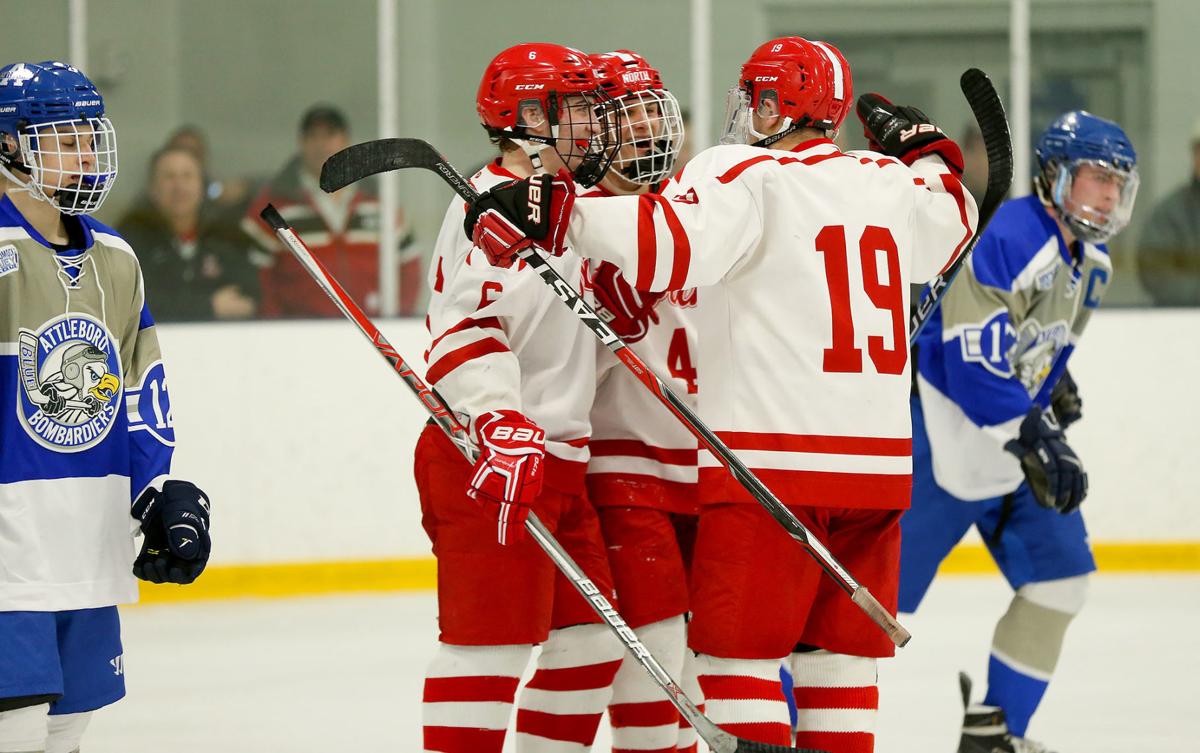 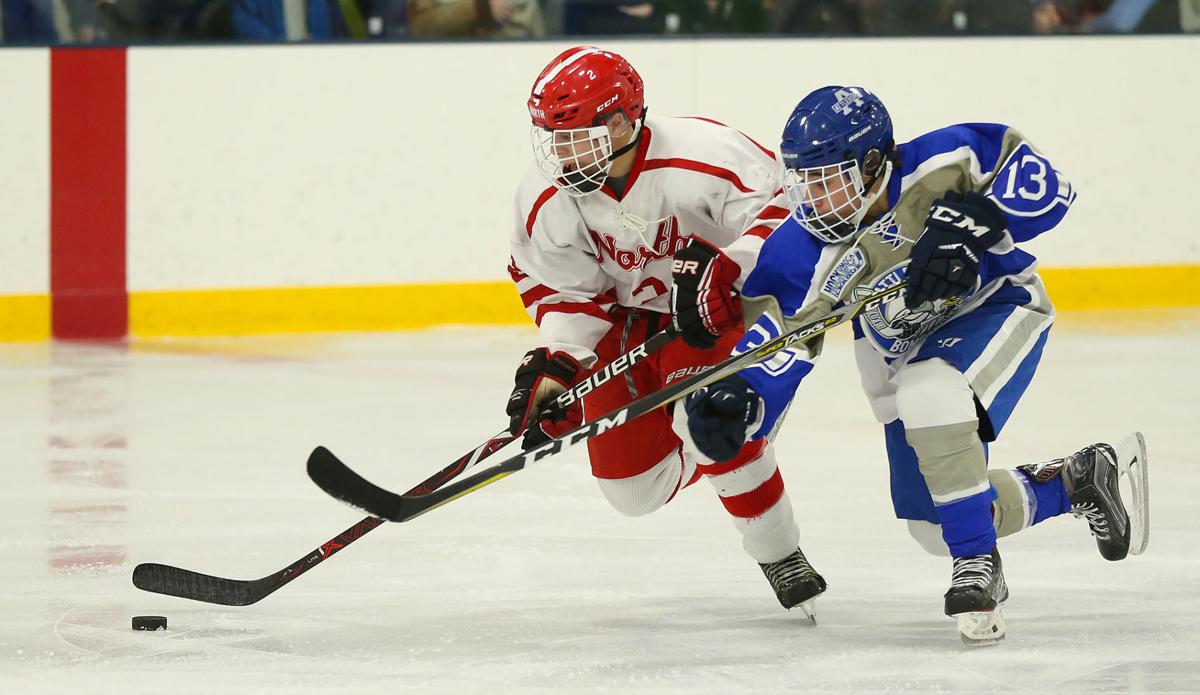 FOXBORO — It’s something of a thankless task, but the Norton High penalty-kill unit deserves quite a bit of praise for its work Saturday night.

The Lancer ice hockey team scored a goal in each period, then preserved its lead against Foxboro High, claiming a 3-1 non-league win at Foxboro Sports Center. Norton committed four penalties after the first intermission, resulting in 6:15 of man-advantage time for the Warriors, but it persevered, even as Foxboro launched a barrage of 28 shots on goal.

“I give all the credit to the penalty kill, especially the composure that we kept after we killed penalties,” said Norton coach Eric Grasso. “We said right when we started this game, ‘It’s all about momentum.’ We did a lot of preparation, hard work in practice, and we changed up the things we do. We just tried to find a way to beat them.”

Norton (4-6-2) got on the board with 2:19 left in the first period, as Evan Czazasty slipped a backhand feed in the midst of a rush to the net, and Tony Cerce finished it off for the score past Espen Reager (21 saves).

In the second period, Foxboro (3-4-2) stepped up its pressure around the net, but couldn’t break through against Norton goalie Trion DosReis (27 saves), who remained composed throughout — consequently frustrating the Warriors.

“He weathered the storm, and he answered big saves with big saves,” Grasso said. “He just added one more thing to what he does. He’s been a great captain, the best leader and an excellent communicator, but we haven’t come up with that big save when we needed it. He picked a great time to do it, his senior year, when we needed it the most.”

That included several Lancers playing out of position, as the team was without several skaters due to illnesses.

Norton added to its lead in the second period, as Joe Juliano tucked a tally past Reager with 8:00 left in the period. The Lancers pushed across another in the third, though good fortune played a role. Justin Goldstein got credit for the score, as the puck got tied up with a Foxboro player and slipped past the goal line — an own goal.

The Warriors eventually got on the scoreboard when defenseman Brendan Tully blasted a shot from the point that found its way past DosReis. Kirk Leach assisted on that goal for Foxboro, which will look to rebound against Bellingham Monday night.

“It felt like we outplayed them, but the bounces just weren’t going our way,” said Foxboro coach Mark Cedorchuk. “(DosReis) played really well. He was seeing all the shots. We were trying to get more guys in front of the net. He was making the initial save, and we just weren’t capitalizing on those rebounds when we should’ve.”

Norton skates against Dover-Sherborn on Saturday.

ATTLEBORO – Jason McNeany recorded a hat trick for the Red Rocketeers, who fired a robust 37 shots on goal on the way to a Hockomock League win Saturday. First-period tallies by Will Yeomans and McNeany, along with Tyler Sarro’s first varsity goal, gave North Attleboro (8-5) a three-goal advantage.

Eddie Noel and Jake Parker followed with goals for Attleboro (4-4-1) to keep it in the contest, but a pair of McNeany tallies restored the three-goal lead by the end of the second period.

FRANKLIN – The Hornets captured the lead with just 6:34 left in the contest, but Franklin answered four minutes later to force a tie in the Hockomock League contest. Austin Ricker tallied for Mansfield (5-3-3), with Coleman Jenkins assisting.

FRANKLIN – Clawing back from 1-0 and 3-1 deficits, the Cougars captured momentum in the third period to force a tie in the Mayflower League contest. Jake Morgan tied it at 1-all with his shot from the high slot, then scored the first of two third-period goals for Tri-County (2-6-3). Luke Madden tallied a power-play goal with four minutes left to close the two-goal gap.

Both teams fired north of 30 shots on goal, as Brian Hall stopped 31 shots to keep the Cougars’ postseason hopes alive. They’re back on the ice Wednesday at Southeastern.

BROCKTON — Ryan Fitzpatrick scored a pair of goals, Gavin Maxwell extended his points streak to three games and Joe Boselli scored the game-winner for the Warriors as KP (6-6) notched its third straight win.

Fitzpatrick tied the game at 1-1 for KP in the first period (9:03, from Maxwell) and regained the lead for the Warriors at 3-2 in the second period (14:59, from Collin Cooke and Jack Coulter). Boselli put KP in front 4-2 in the third period (6:13 from Luke D’Amico and Will Connor).

Maxwell tied the game at 2-2 for KP just 1:13 into the second period with Mike Curtin assisting. KP uncorked 24 shots, while the Warriors killed off two penalties in front of goalie Shane Frommer (20 saves).

SMITHFIELD — Jack Murphy scored in the fifth round of a shootout to give Bishop Feehan a non-league decision. The Shamrocks (4-5-1), however, recorded the game as a tie at the end of regulation under MIAA rules. Smithfield tied the score at 2-2 with 36 seconds left in the third period.

Aidan Findlan totaled 34 saves in goal for Bishop Feehan. The Shamrocks have an EAC game Monday at 7 p.m. in New Bedford against Bishop Stang.

Franklin — Tri-County scored a pair of third-period goals to tie the game at 3-all and earn a point as it tied Diman Voke in a Mayflower League hockey matchup at the Pirelli Veteran Arena.

After falling behind 2-0, Jake Morgan netted a goal, assisted by Luke Madden, to tighten the gap at the end of the second period. Morgan added another goal to tie the game with 11 minutes remaining and Madden scored the game-tying goal with 3:42 to play in the final period for Tri-County, which outshot the Bengals 35-27.

The Cougars (2-6-3, 1-5-2 in the league) will play Southeastern Wednesday at the Raynham IcePlex.

DEDHAM — Olivia McCarthy scored her first two goals of the season, both on power plays, while Kayleigh Remmes netted the game-winner as King Philip (7-4-1) downed Dedham at the Noble and Greenough School.

McCarthy twice put the Warriors into the lead with goals in the first and second periods, while Remmes deflected home a Marni Cormier shot at 12:02 of the third period for the game-winner. Lilly Potts totaled 21 saves in goal.

Liz Healy, Christina O’Connell and Emma Garland also scored for Foxboro-Mansfield (7-4-2), which is off until a Feb. 3 rematch with Stoughton.

CANTON – Cat Luciano deposited a pair of goals in a come-from-behind win Saturday over the Wolverines. Kerran Holmes played well in net to help deliver the win for Mansfield/Foxboro.