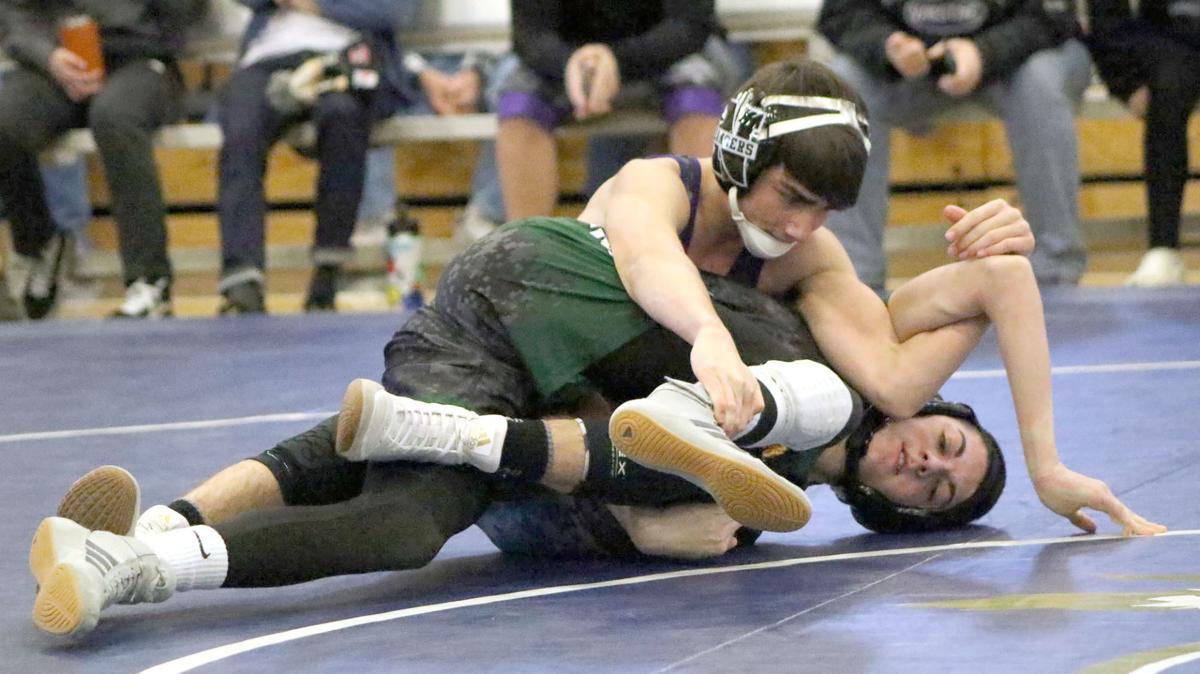 Norton High’s Steven Chaffee battles Chad Ellis of South Shore Tech during the semifinals of the 106-weight class at the 2020 MIAA D3 South Sectional finals at Foxboro High School in Feb. 2020. Chaffee ultimately won the 106 class title, winning all of his three matches. 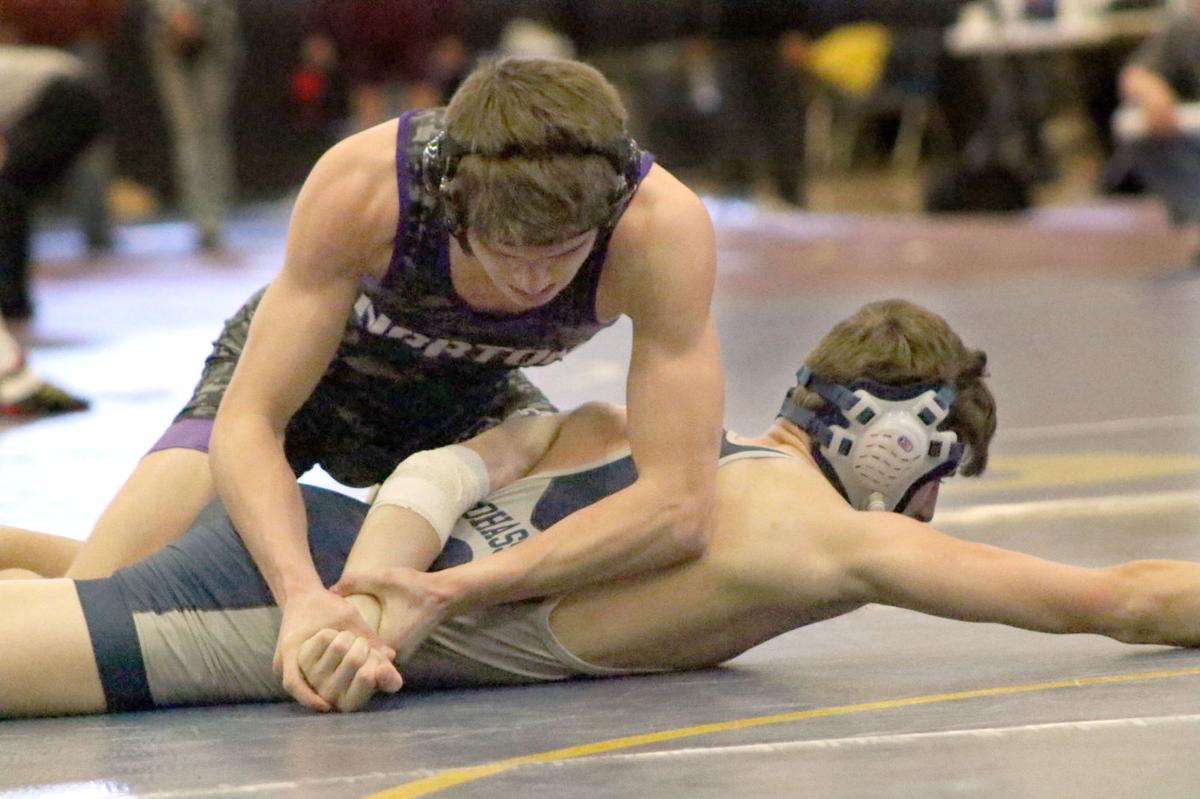 Norton High’s Steven Chaffee battles Chad Ellis of South Shore Tech during the semifinals of the 106-weight class at the 2020 MIAA D3 South Sectional finals at Foxboro High School in Feb. 2020. Chaffee ultimately won the 106 class title, winning all of his three matches.

The generic personal-protection equipment might prevent or postpone the transferal of the COVID-19 virus, but for high school wrestlers, facemasks are an every-second nuisance.

So Coleman went searching. “The only wrestling masks that I could come up with were those worn by those Mexican professional wrestlers (Lucha Libre),” said Coleman. That’s one of the predicaments that high school coaches and wrestlers face as they attempt to convene a spring season, one approved by the MIAA under state health guidelines.

“You know how the North Attleboro wrestlers always dye their hair blonde, so I guess that for our first match we’ll march out with our Lucha Libre masks!,” Coleman chuckled.

In a memo from the MIAA on April 12, in coordination with the Environment and Energy Agency, wrestling was allowed for Level-1 and modified Level-2 activities — socially-distant workouts with supervision.

However, further interpretations are necessary if wrestling were to be approved for Level-3 activity, one-on-one competition. The MIAA is scheduled to advise on revisions and modifications this week.

Coleman was hoping for a wrestling season, and not surprised that the MIAA approved competition. “There was good vibration coming out of the coaching circles,” Coleman indicated. “The communication was not there; the MIAA was waiting on the EEA for approval, but we still don’t have a full set of guidelines yet.”

Wrestling coaches are planning to be on the mat, using the 10 practice sessions as advised before competition can begin.

Mansfield High wrestling coach Mark DeSanto met his Hornets, some 22 strong, for the first day of practice at the Qualters Middle School Gymnasium.

“We had enough space, it was wide-open for us,” DeSanto said of his roster being minus several student-athletes who play baseball or lacrosse during the spring season.

The MIAA opted to cancel the customary winter wrestling season and postpone competition from the Fall-2 “gap” season from mid-March through April to the spring season.

But as of Monday, sport-specific guidelines for wrestling competition had yet to be fully formulated by the MIAA.

“It’s all kind of a learning curve,” DeSanto said of reintroducing his wrestlers to competition after more than a year off from high school competition, not to mention the spring and summer club wrestling tournaments.

Upon the recommendations from USA Wrestling, “Rigorous, frequent cleaning schedule/protocol of equipment with disinfectant before, during, and after training; and wearing appropriate personal-protective equipment (gloves, facemask) to prevent contact with contaminated surfaces and protect against toxicities associated with some cleaning products” are to be fostered.

MIAA and state officials were fearful of what transpired at wrestling tournaments held elsewhere in the country. During a Florida tournament in December, 38 of 54 attendees tested among the total of 130 tournament attendees received positive results for the coronavirus. Among those 38 Covid-19 patients, another 446 individuals were identified for contact tracing.

In Louisiana, state health officials identified 20 student-athletes who tested positive after a wrestling tournament there in which 400 wrestlers participated.

New Hampshire was the lone New England state to allow for competitive wrestling during the winter season, which were limited to dual meets, while Vermont and Connecticut canceled their seasons. Massachusetts, Rhode Island and Maine opted to wait until the spring season to determine if community health and safety concerns would be eased to allow for competition.

“Hopefully we’ll find out more information (from the MIAA),” DeSanto said of guidelines for individual and team workouts, and for dual meets.

Whether wrestling matches are held outdoors, or inside a gym with doors open and fans whirling to improve ventilation, have yet to be determined. Much depends on each individual school’s facilities or access to alternative sites.

“It could be outdoors or they (MIAA) could be fine with a big gym,” DeSanto added. “The kids are happy to be back in the gym and back on the mat.”

To be determined are whether matches would have to be contested outdoors, or whether there would be ample space and ventilation within gymnasiums.

At Norton High, for example, the Larocque Gymnasium is a multi-use facility, including serving as a cafeteria. So Coleman and the Lancers rolled up a mat and took it outdoors. “The grass was bumpy and lumpy, it was far from perfect, but we were out there.”

Coleman had some 22 wrestlers show up for workouts, like DeSanto losing a handful to baseball, lacrosse and track. “We’re happy, but now we have to finalize the official guidelines and an approved dual-meet schedule, maybe 8-10 meets with no postseason.”

So the goal for the Lancers is to finish atop the Tri-Valley League and abide by MIAA guidelines.

“It was a nightmare in practice, masks were coming off right and left,” Coleman added. “There’s no real good design for masks for wrestling.

“For us wrestlers, we’ll do whatever it takes.”