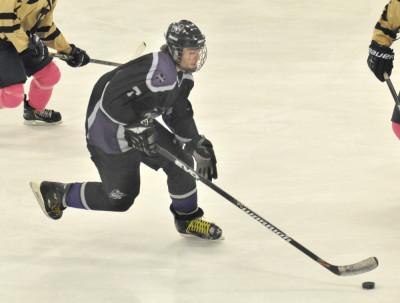 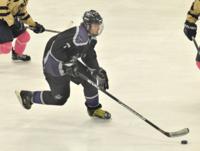 Norton’s Troy Parker (7) takes the puck toward the Foxboro net. 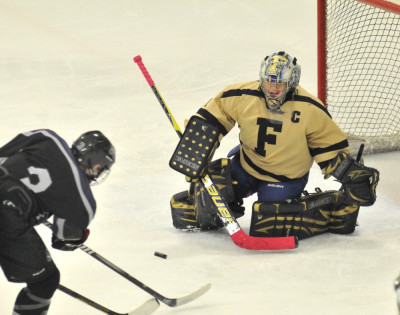 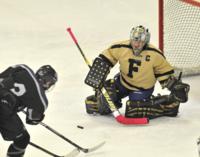 Norton’s Troy Parker (7) takes the puck toward the Foxboro net.

FOXBORO - Clint Gallagher has never tended goal for the first-year varsity hockey program at Norton High School, most often the eighth grader skating as a defenseman for the Lancers.

Norton coach Kyle Heagney tapped him on the shoulder and told him to add some pads and Gallagher responded with a 17 save performance, blanking the Foxboro High Warriors through the final two periods of play Wednesday in a 1-1 tie.

"It feels like a win for us," said Norton coach Kyle Heagney as the Lancers were stonewalled by Foxboro goalie Melissa Almeida (16 saves) through the first two periods of the virtually penalty-free (one) non-league game at the Foxboro Sports Center.

Liam Lynch put Foxboro in front at 10:24 of the first period and it remained that way until Ryan Kuzmich netted the equalizer for the Lancers at 7:48 of the third period, with Pat Robles and Cory Parker assisting.

"We had our chances, we just didn't bury it (the puck)," related Foxboro coach Jim Genovese, including the potential game-winning off the stick of Kyle Sperzel with four minutes left.

Foxboro dominated the first period of play, having a 7-4 advantage in shots. "It was a well-fought battle on both sides," added Heagey, Gallagher and the Lancers keeping the Warriors scoreless through the final 35 minutes, limiting Foxboro to three shots in the third period.

Foxboro returns to the Foxboro Sports Center Saturday night at 7 for a face-off against Franklin, while Norton will have an 8:30 p.m. face-off that evening in Franklin against Tri-County.

FALL RIVER - Brandon Botelho recorded a "hat trick" during the second period and goalie Jake Robitaille totaled 22 saves as D-R/Seekonk routed the Vikings in a South Coast Conference game at the Driscoll Arena.

D-R/Seekonk scored five second period goals to take control. Botelho scored his first goal (from Nick Soares and Justin Silva) at the four-minute mark, his second goal in the 14th minute (with Curtis Letourneau assisting) and his third goal on a power-play with 48 seconds left (Jeff Scott and Letourneau assisting).

Nick Soares scored the game-winning goal for D-R/Seekonk just 14 seconds into the second period and tallied his second goal of the period on a power-play in the ninth minute.

"We moved the puck very well and finally buried it," said D-R/Seekonk coach Ryan Cordeiro. "The guys who were supposed to score finally scored.

Joey Givens netted the sixth goal of the game for D-R/Seekonk in the third period in the eighth minute, with John Duncan and matt McDonald assisting. The Falcons (6-7) will will take a three-game win streak into Fall River tonight at 7:30 for a non-league game with Southeastern Regional.

QUINCY - The Shamrocks yielded single goals in the first and third periods to North Quincy in losing the non-league game.

Matt McDonald put North Quincy ahead at 2:44 of the first period, then Bishop Feehan goalie Mike Capprini (32 saves) stonewalled them until Rob Cameron scored with two minutes left in the third period.

"The kids played well, it was a very competitive up and down game," said Bishop Feehan coach Phil Hulbig, whose Shamrocks are now 7-5-1. "Sometimes, the puck doesn't bounce your way."

The Shamrocks next host Somerset-Berkley in an EAC game Saturday night at 6:30 at the Aleixo Arena in Taunton.

RAYNHAM - The Cougars of Tri-County surrendered pairs of goals in the first and third periods to Southeastern Regional in losing the Mayflower League game. The Cougars (5-4) beat Southeastern 3-1 earlier in the season.

Colin Spillane put the Cougars on the scoreboard with a first period goal at 12:35, cutting the Hawks lead to one. However Tri-County faced a three-goal deficit before Justin Most scored in the third period at 6:35 with Connor Harrington and Spillane assisting. Tri-County has a home game Saturday night at 8:30 in Franklin against Norton.

KINGSTON - The King Philip Warriors spotted Hanover/Cohasset three goals before tying the Southeastern Mass. Girls' Hockey League game with 2:08 remaining on a tally by Cassie Curtin. However, Hanover/Cohasset then regained the lead with 90 seconds to go.

"It was a tough loss because we beat them 5-1 the first time," said KP coach Paul Lyons. The Warriors faced a two-goal deficit after the first period and a 3-0 margin early in the second period.

Danielle Hamilton scored twice for KP (4-8), putting the Warriors on the scoreboard at 3:18 of the second period and closing the gap to 4-3 with a tally at 8:06 of the third period. Haley Anchukaitis netted KP's second goal at 12:12 of the second period.

Nicole Lyons totaled 19 saves in goal for KP, which mustered 15 shots offensively. KP returns to the ice in Foxboro Saturday afternoon for a non-league game at 4 against Latin Academy.