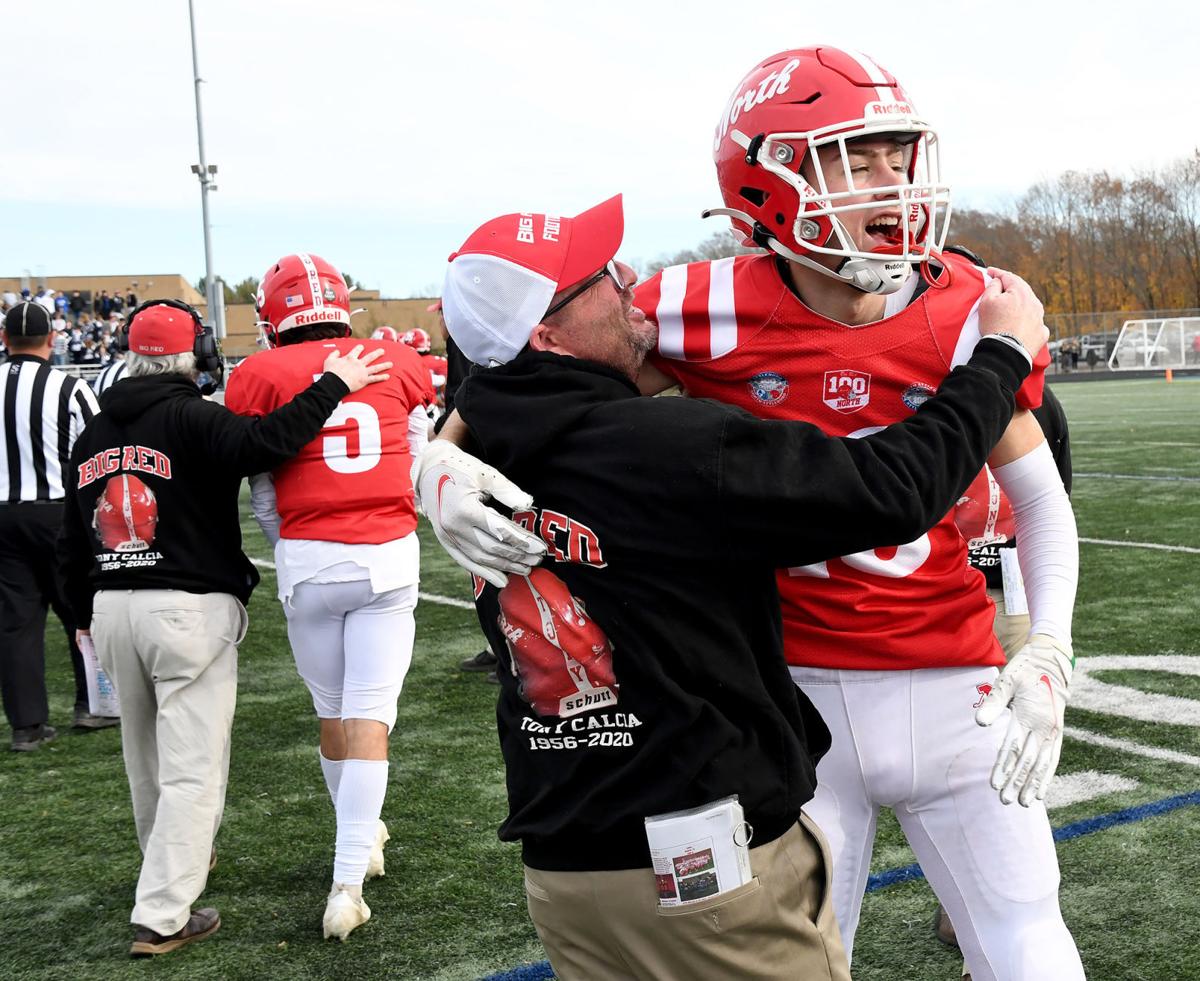 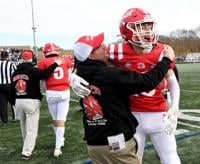 North Attleboro High assistant football coach Sean Walsh hugs player Gavin Wells at the conclusion of the Rocketeers’ Thanksgiving Day victory over Attleboro High. The common thread through the years of success on the field for the Rockteers has been its roster of head coaches and the devoted work of the assistant coaches. “We’re so very fortunate to have so many guys on our staff for so many years,” head coach Donny Johnson said. 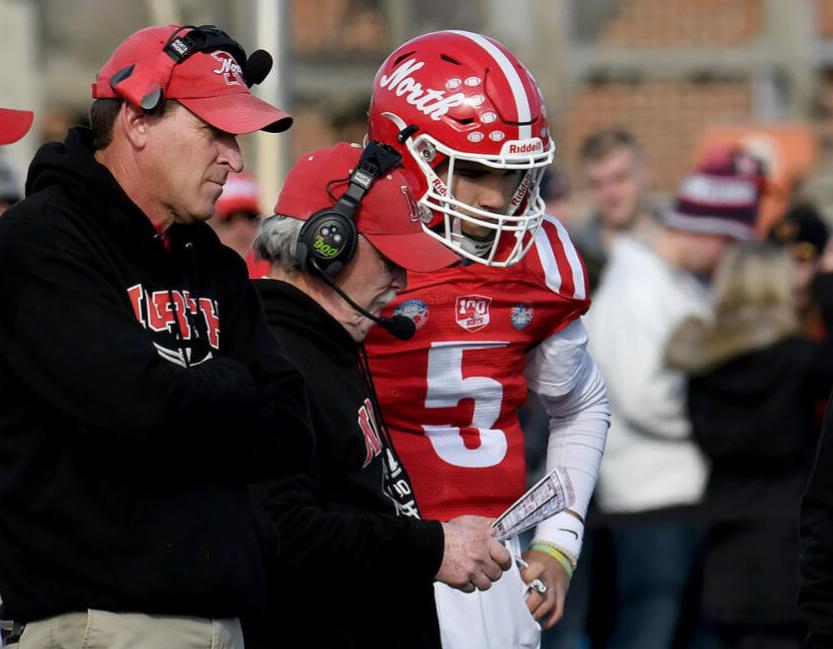 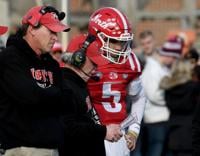 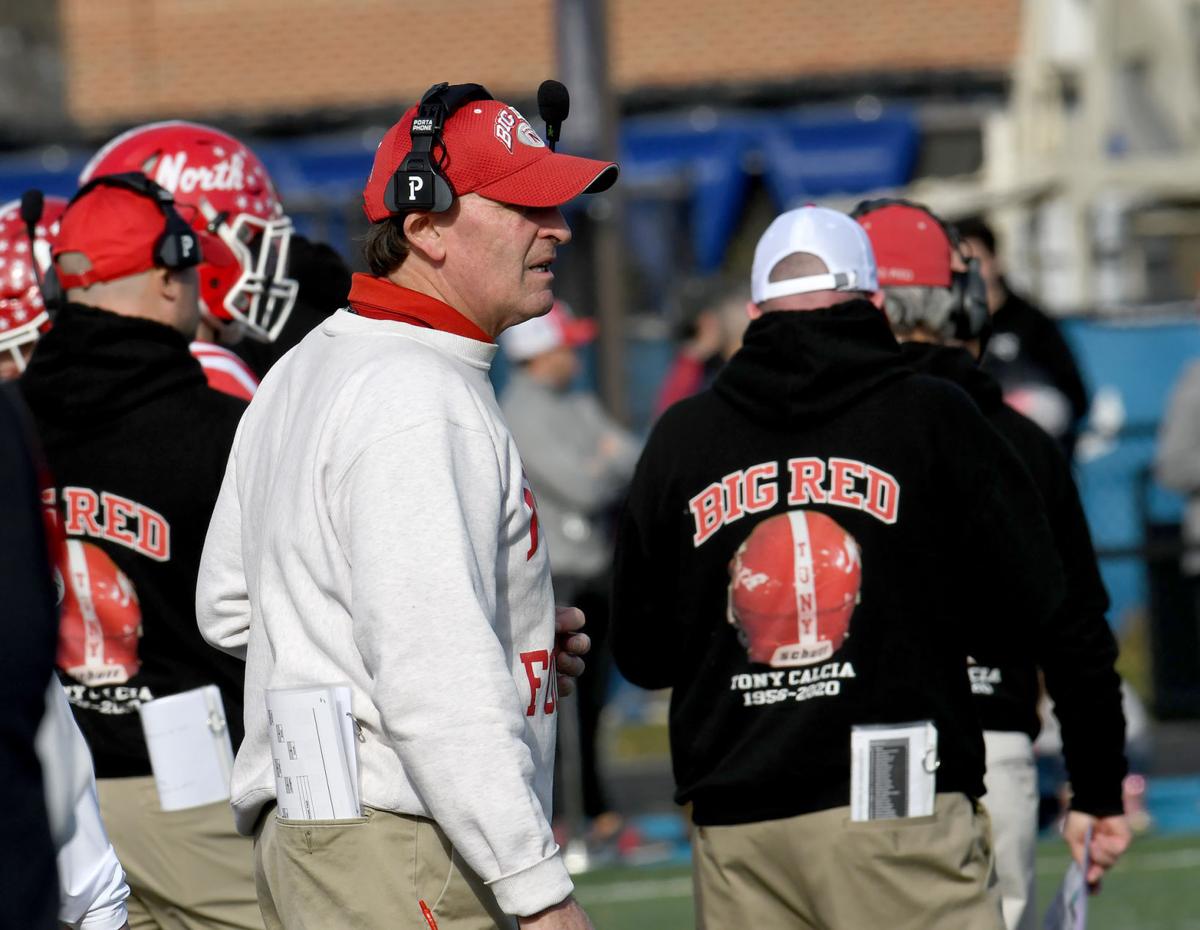 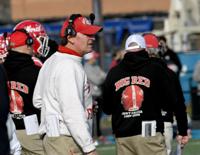 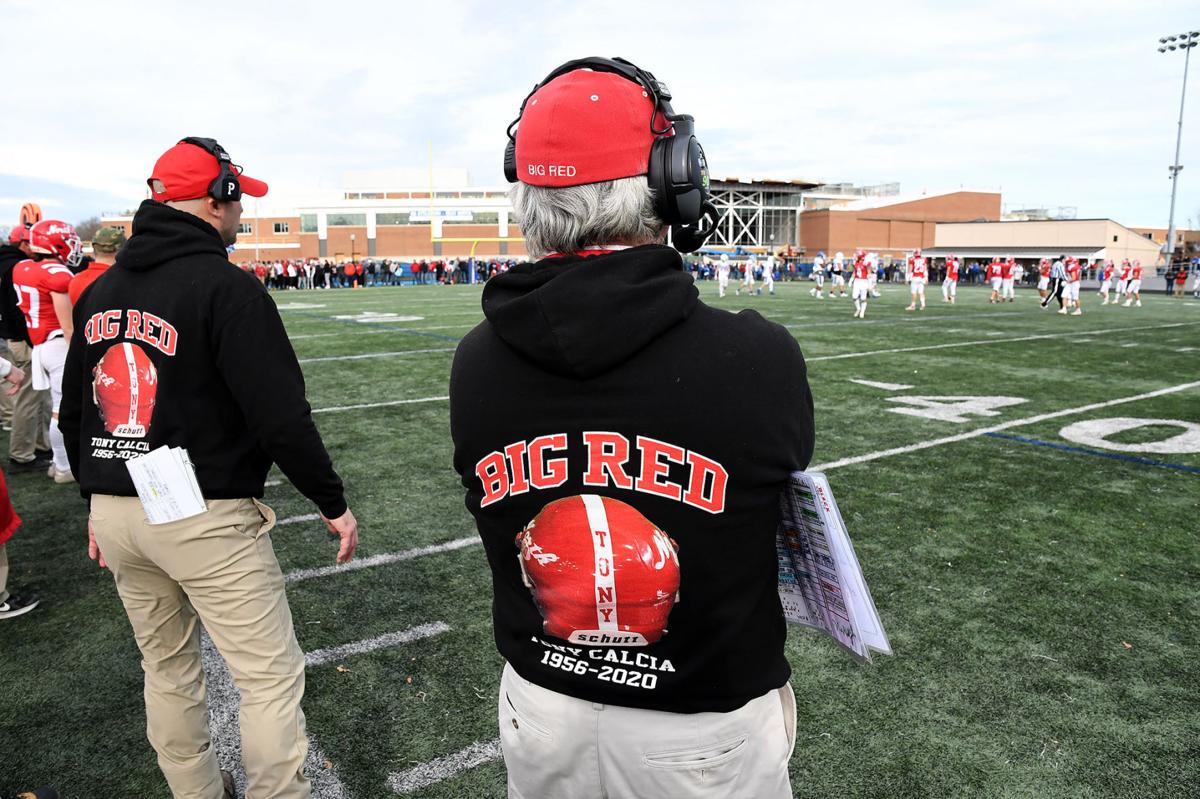 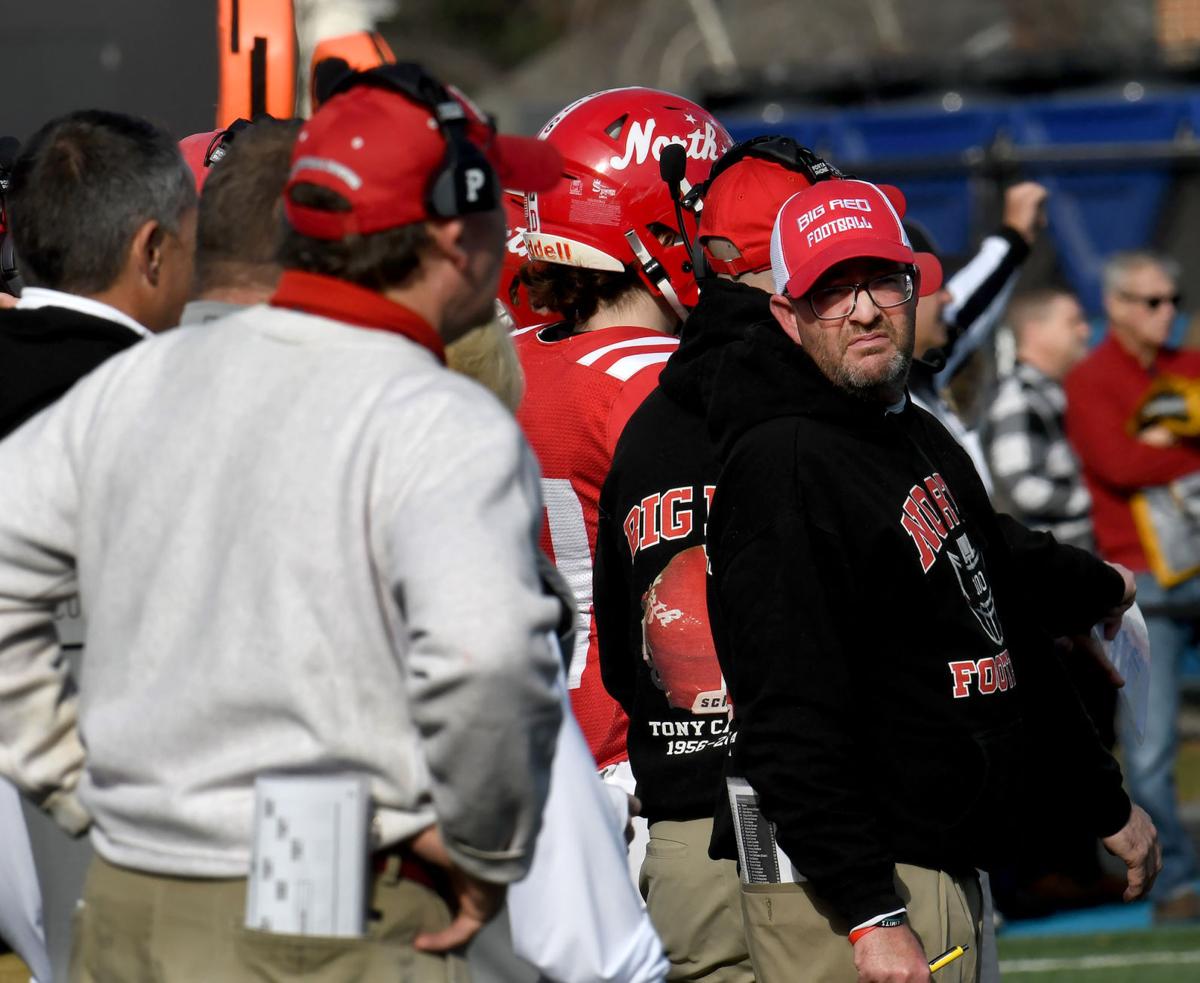 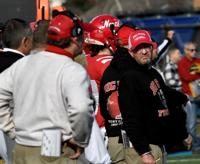 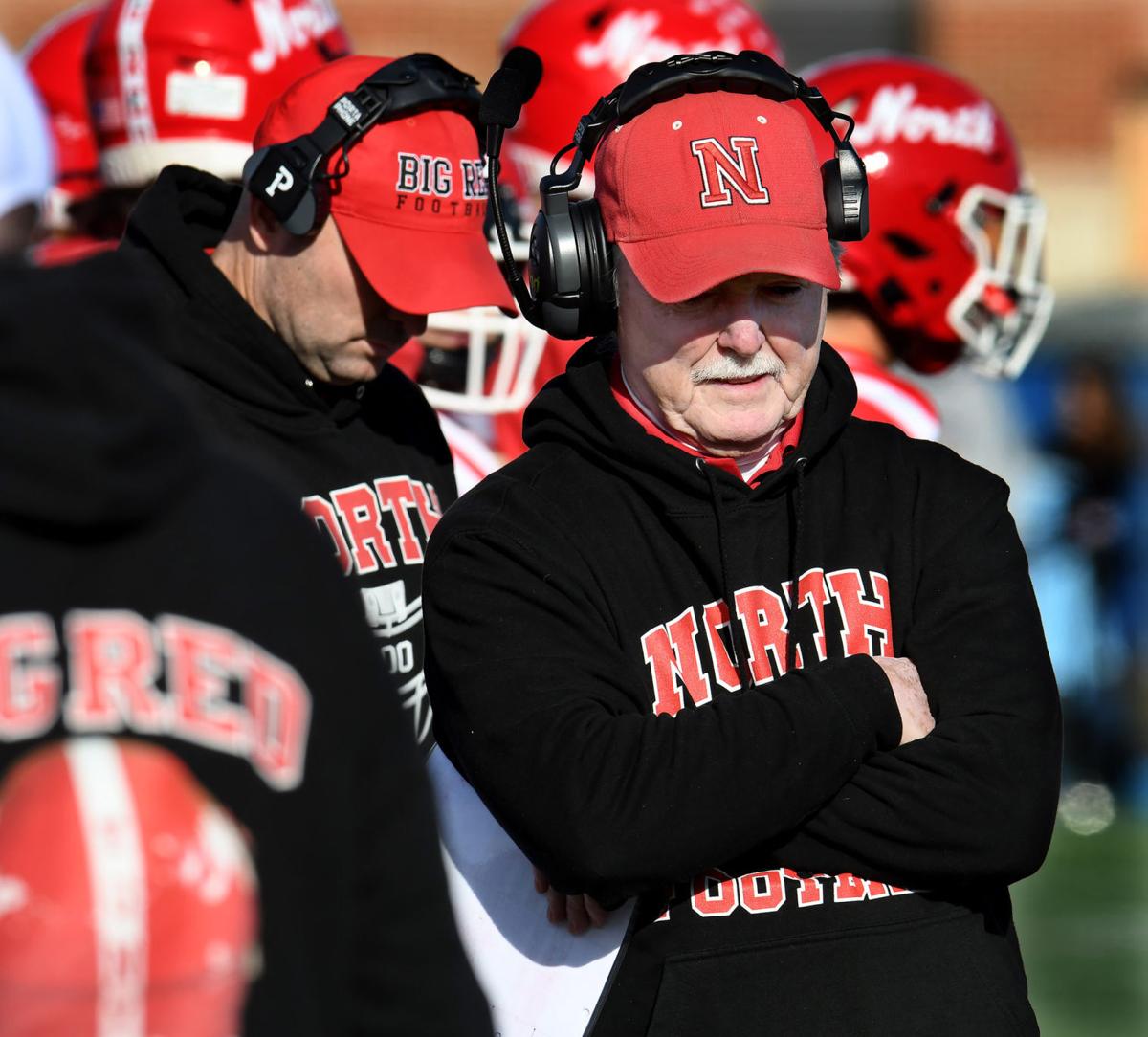 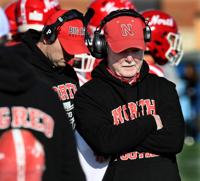 North Attleboro High assistant football coach Sean Walsh hugs player Gavin Wells at the conclusion of the Rocketeers’ Thanksgiving Day victory over Attleboro High. The common thread through the years of success on the field for the Rockteers has been its roster of head coaches and the devoted work of the assistant coaches. “We’re so very fortunate to have so many guys on our staff for so many years,” head coach Donny Johnson said.

NORTH ATTLEBORO — The common thread through the years of success on the football field for the North Attleboro High football team has been its roster of head coaches and the devoted work of the assistant coaches.

Johnson has served as a member of the Red Rocketeer football family in various roles for nearly four decades.

His brother Jack Johnson, a defensive guru, and Paul Sullivan, a former North head coach who now serves in the role of offensive coordinator, have similar roots.

And then there are former Rocketeers like Ken Nally, Derek Herber, Chris Riushlow and Mike Hart, all lending their expertise to the development on the football field of student-athletes at the varsity level.

Former Rocketeers Kevin Mahoney and Mike Napolitano have served as volunteer assistants. At the sub-varsity level, former Rocketeers Pat Griswold, Barry Gaumond, Evan Sweeney and Andy Mingo are members of the staff. Add in Sean Walsh and King Philip-product Alan Foster, the helping hands, and “it really is a total team effort by the coaches,” Johnson said.

That’s not to forget some former Rocketeer standouts such as Carl Hebert and Jason Feid, who have served on the staff, as well as Kyle Van De Giesen prior to his death in 2009.

“It really does breed success,” Johnson said of being surrounded by such a staff of well-versed and knowledgeable individuals who are able to translate the playbook through repetition into execution on game day.

“We’re so very fortunate to have so many guys on our staff for so many years,” Johnson said. “This is my 39th year, Sully (Sullivan) has to be 40-something, Jack (Johnson) has been there every year, Derek (Herber) has been there about every year. It really helps.”

The success of such a tradition can be found on the scoreboard this season where the Rocketeers have won seven games and earned their 11th appearance in an MIAA Super Bowl.

The Rocketeers have won five straight games by margins of 30, 35, 42, 34 and 18 points to earn a spot in the MIAA Division 3 Super Bowl against 10-0 No. 1 seed Marblehead Thursday at Gillette Stadium with a 3 p.m. kickoff.

North Attleboro won its first Super Bowl championship in 1973 under Guthrie and repeated again in 1974.

North last won a Super Bowl in 2002, earning the MIAA Division 3 championship with a 44-40 thriller over Swampscott.

The Rocketeers also advanced to Super Bowl title games in 1998 (losing to Foxboro), 1995 (losing to Marshfiield) and their latest appearance, in 2017 (losing to St. John’s of Shrewsbury).

“I think the kids take on the personalities of the coaches, too,” Johnson said of the Rocketeer student-athletes buying into the program as freshmen and sophomores and then mentoring younger players through their junior and senior seasons.

“With all of the years of the coaches on the staff, it brings credibility,” Johnson said of the Rocketeers making the individual sacrifices for the development of team goals. “The kids know that we’ve been successful in the past so they buy in a little sooner.”

For example, current North senior captain, running back and linebacker Tyler DeMattio was sitting in the stands at Gillette Stadium with his North Attleboro Pop Warner jersey on while watching his elder brother Zach, the current baseball standout at Wheaton College, play in the Rocketeers’ last Super Bowl appearance against St. John’s.

Johnson has been serving as North’s defensive coordinator, creating the schemes to confuse foes. Other than a 5-minute stretch of the second quarter in a playoff game against Milton, allowing three TD’s, North has allowed just one TD in each of its last four games.

All the while,the Sullivan-orchestrated Big Red offense has piled up 42, 42, 48, 62 and 28 points in winning its last five games.

Herber and Hart have been directing the offensive and defensive lines for North, their instruction being major factors as North had just two seniors, Jared Vacher and Keysun Wise, with any appreciable experience in those roles.

“The average person would be amazed at the number of hours that the coaches put in,” Johnson said of the weekly schedule of breaking down game film from a Friday night game, then working on positional and individual instruction, reviewing game film of the next opponent on the schedule, preparing a game plan and rehearsing that Monday through Thursday.

And that’s also monitoring the injury list, the strength and conditioning programs, the academic progress of the student-athletes, while also nurturing teenagers through their formative years.

“We’ve been nonstop,” Johnson said, citing the short turnaround time from beating Billerica on a Saturday night in Quincy and preparing for the 100th renewal of the Thanksgiving Day game at Attleboro High on Thursday.

“It’s a challenge every week, that’s the fun of coaching,” Johnson said.

The North staff was barely be able to catch its collective breath when the entire process renewed itself on Friday in preparation for Marblehead and the Super Bowl game in Foxboro.

“We haven’t had a second to look at film at Marblehead,” Johnson said. “Thanksgiving Day night, all day Friday — that’s all that we’ll be doing.

“That’s coaching, but that’s also the joy of coaching,” he added. It’s worth it when you can get a chance to play in a Super Bowl. We could never have the success that this program has had through the years without so many devoted and loyal assistant coaches.”