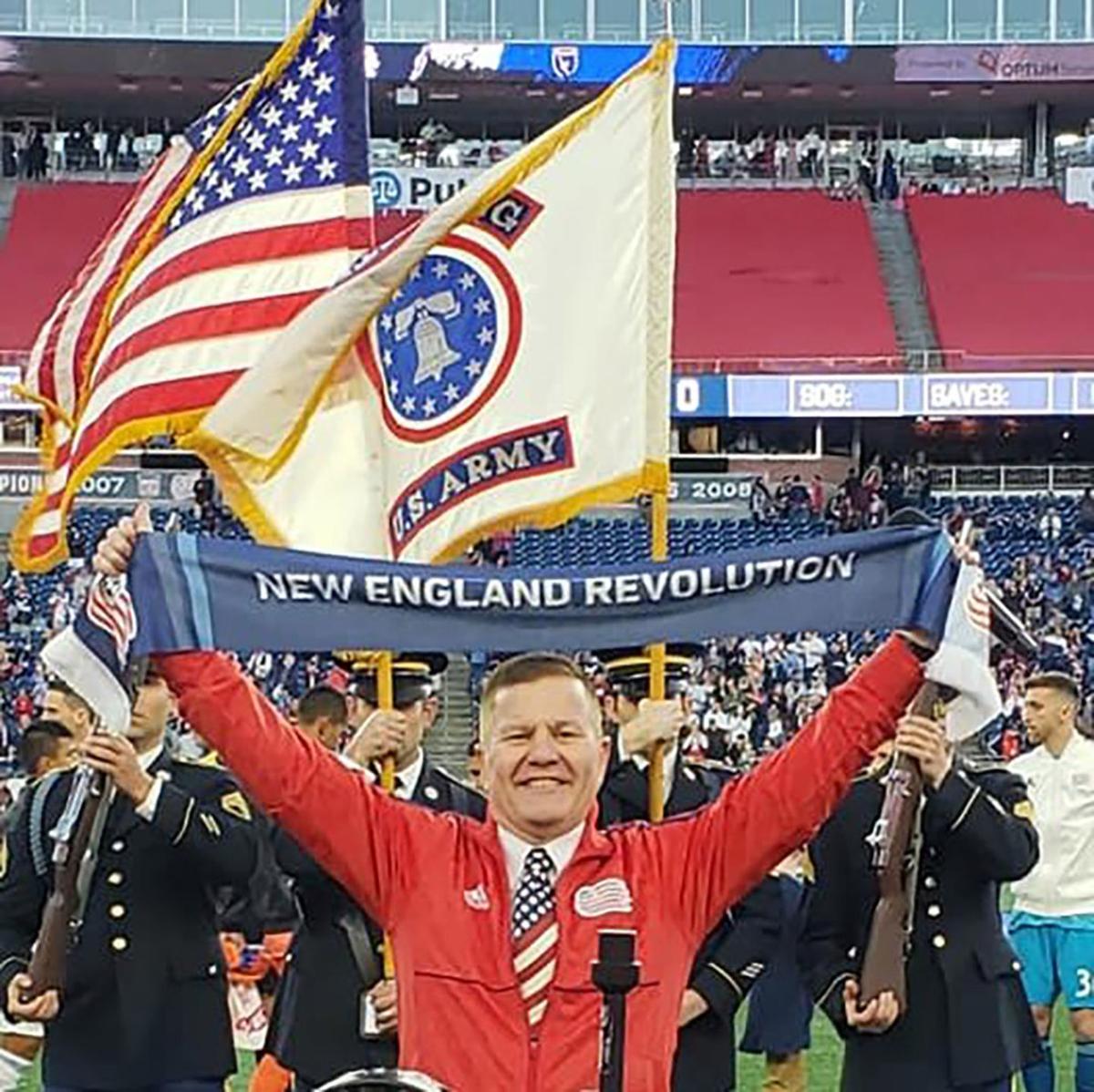 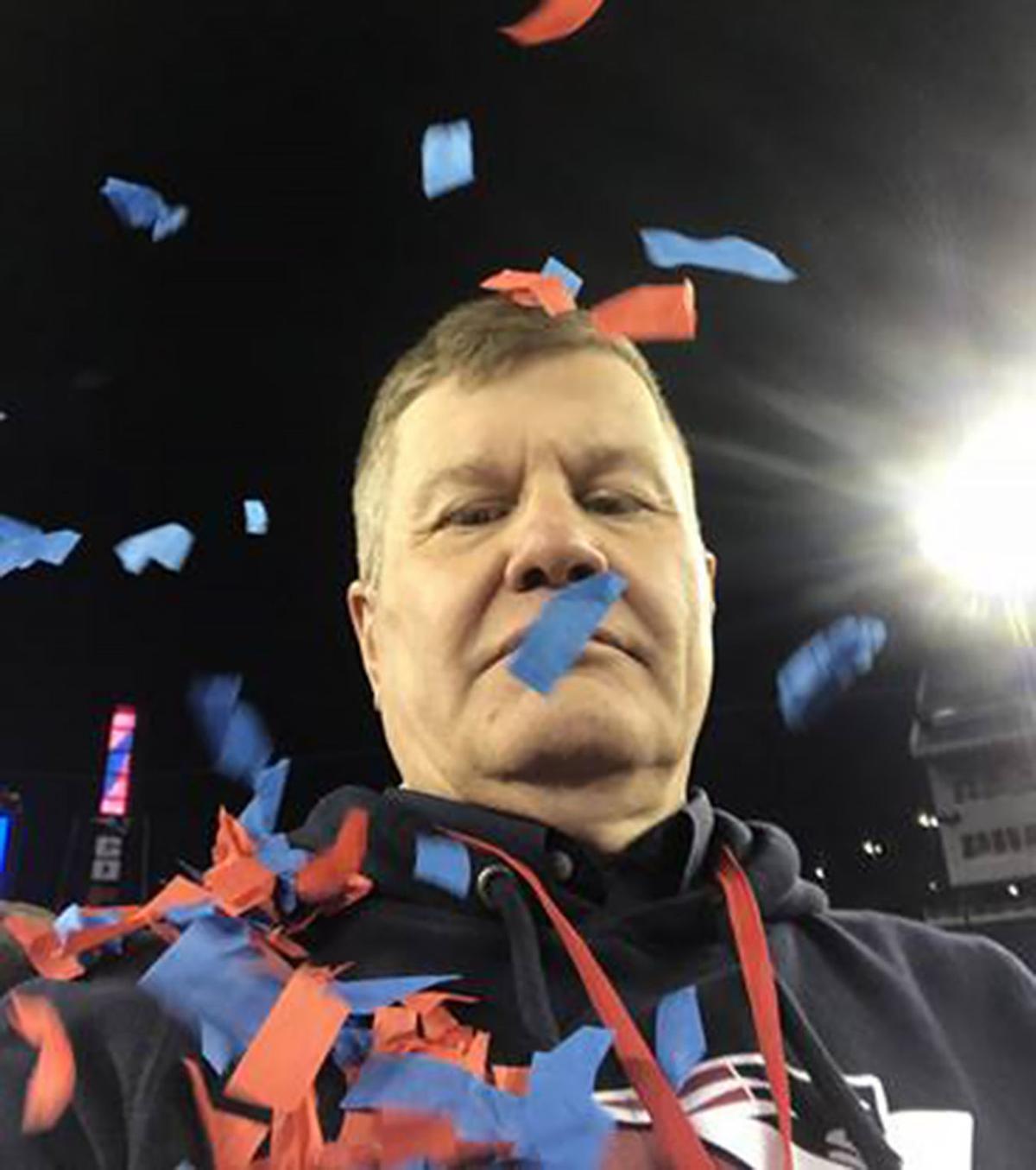 Brad Steele operates the electronic sign board at Gillette Stadium (SUBMITTED PHOTOS) Steele on the field at the winning end of the 2017 AFC Championship game. 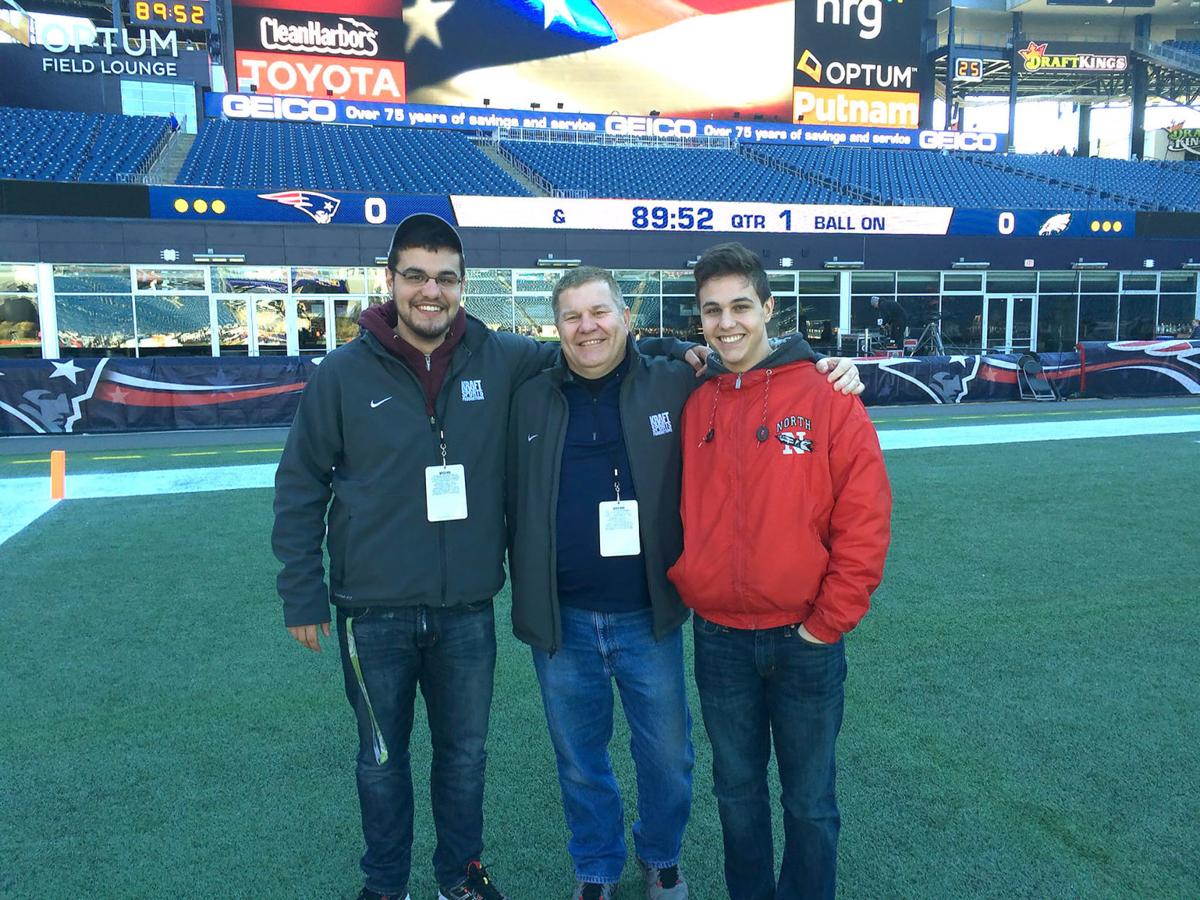 Brad Steele stands between his sons Andrew, left, and Dillon down on the field at Gillette Stadium. Steele operates the electronic sign board at the stadium and after years of asking his bosses, was able to sing the National Anthem at a recent New England Revolution game.

Brad Steele operates the electronic sign board at Gillette Stadium (SUBMITTED PHOTOS) Steele on the field at the winning end of the 2017 AFC Championship game.

Brad Steele stands between his sons Andrew, left, and Dillon down on the field at Gillette Stadium. Steele operates the electronic sign board at the stadium and after years of asking his bosses, was able to sing the National Anthem at a recent New England Revolution game.

You could call it playful badgering, but Brad Steele never let his bosses forget he wanted to take on an extra assignment.

For years, the North Attleboro native would remind them, but his request wouldn’t came to fruition; time and again, the opportunity passed him by.

No, this wasn’t some extra desk duty or management responsibility he sought. Steele wanted to sing the National Anthem, and it took 25 years of bug-in-the-ear requests before his Gillette Stadium bosses gave him the green light.

Steele, 56, finally got his chance during the Revolution’s Salute to Heroes contest against the San Jose Earthquakes on May 11. After nearly three decades as the stadium’s electronic message center controller, Steele, who also served as an avionic systems specialist in the Air Force, would step onto the other side of all that machinery.

“I am not going to lie, that was pretty awesome,” Steele said. “That was a bucket list item.”

He was a bundle of nerves leading up to the day of the game, fretting over the stadium’s echo effect, in which singers hears their own voice carom throughout the venue in mid-performance. But hours before the kickoff, the soundcheck set his mind to ease, and he could trust in his lifetime of vocal performances — and a bit of memory.

“I remembered the words,” he joked.

That’s not all he remembers. Steele’s work with the Patriots spans 25 years, but his father worked with the team before that, predating the appearance of blue jerseys, electronic signs and, most notably, athletic excellence. His family’s business, Signs Etc., previously based in Plainville, has handled stadium signage since the 1970s. Steele grew up in the orbit of the old Foxboro Stadium, in Franklin, Attleboro and Barnstable, and never strayed too far from it.

His family has been attending games ever since, as fans or signage coordinators — sometimes both. Steele’s father, Richard, was known to some in the stadium as the “Grogan banner man.” He would vocally hound then-quarterback Jim Plunkett each time he threw an interception, calling for his understudy, Steve Grogan. Patriots fans quickly picked up the torch en masse.

“If you look at the old NFL Films, if you see the guy waving the Grogan banner, that’s my father,” Steele said.

Younger fans might be unable to imagine such faulty play at that position, if not team-wide, but Steele was there for it, proverbially freezing to the seats. His deep past with the team has given him a thorough appreciation of where he sits today.

Steele and his team works during all sporting events at the stadium: Patriots, Revolution, lacrosse games, Monster Truck racing, high school football championships; he even picked up a credit for a movie called “The Game Plan,” which filmed at the stadium.

For Patriots games, Steele’s work begins roughly five hours before kickoff. He tests and inputs the video messaging and signage needed for that game, such as promotional material, hype-up videos and the team’s social media feed.

Just before game time, the booth starts to fill up with Kraft Group personnel. When the game is underway, Steele must be on his toes to summon the graphic needed for a particular situation, as called out by the in-house director.

“We have to be able to watch the game and see what’s going on, and react accordingly,” he said.

Working the game is different than watching the game, but Steele is quick to realize how lucky he’s been to experience the team’s incredible run of success — dreamlike compared to his early fandom. He can witness training camp firsthand and has taken his picture with all of the Super Bowl championship trophies, including the one dented by the fabled Gronk bunt.

This year he even had the luxury of serving as an ambassador during the team’s championship parade. He rode on a duck boat with the defensive backs. And, while Steele maintains the sense of professionalism and boundaries that exist for those that work in the business, the opportunity to rub elbows with those players as a duck boat ambassador was one he cherished.

And now it’s a third-generation endeavor, as Steele’s sons Andrew, 25, and Dillon, 21, have filled in for games. Andrew, a North Attleboro grad like his brother, has been a regular for Revolution games for four seasons.

Steele’s day-to-day work comes as the director of unified communications for the state, but his work at Gillette Stadium has proven quite the reward.

“I used to pay to go to the games. I would pay to tailgate, pay to park, go home at the end of the day, and my wife would be mad because I was out being a Patriots fan all day,” Steele said. “But now I go to the games, they feed me while I’m there, I park for free, and I go home and my wife feels bad because I’ve been working all day.”