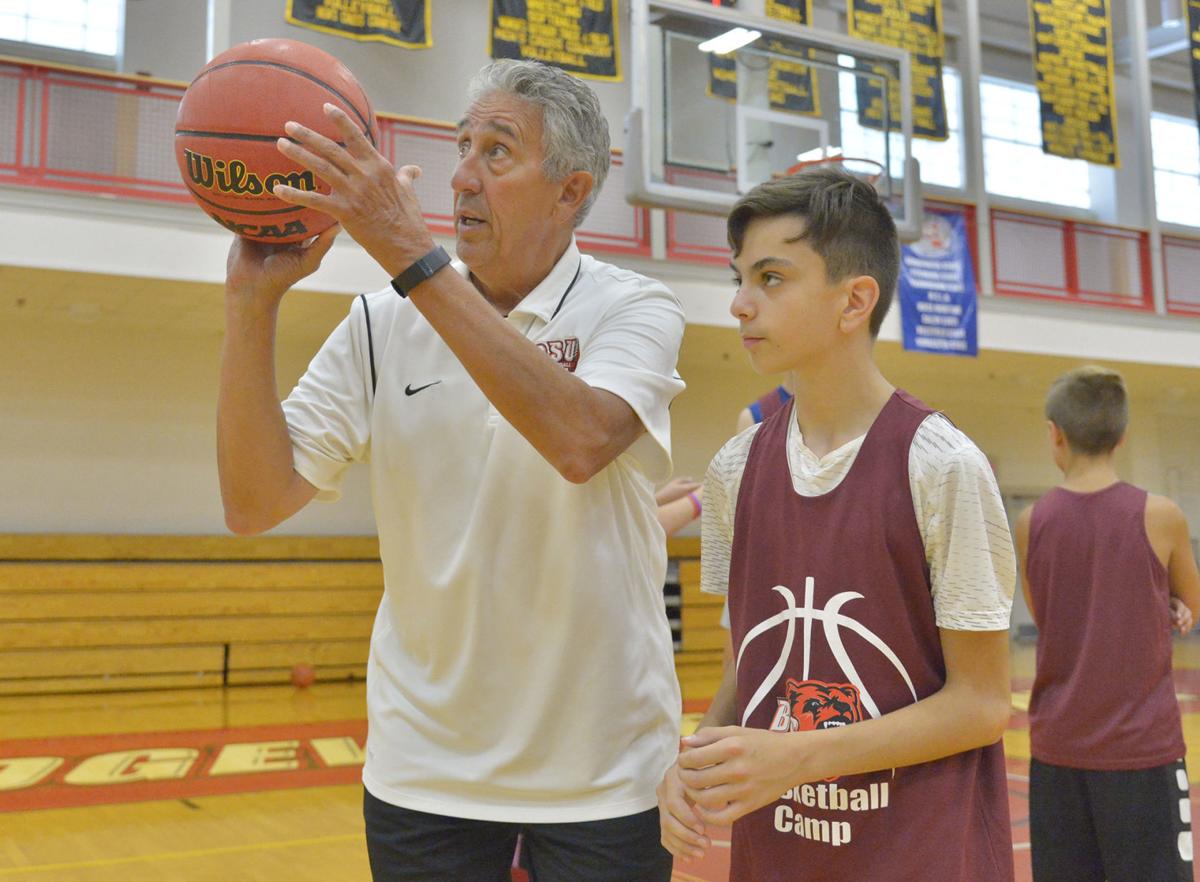 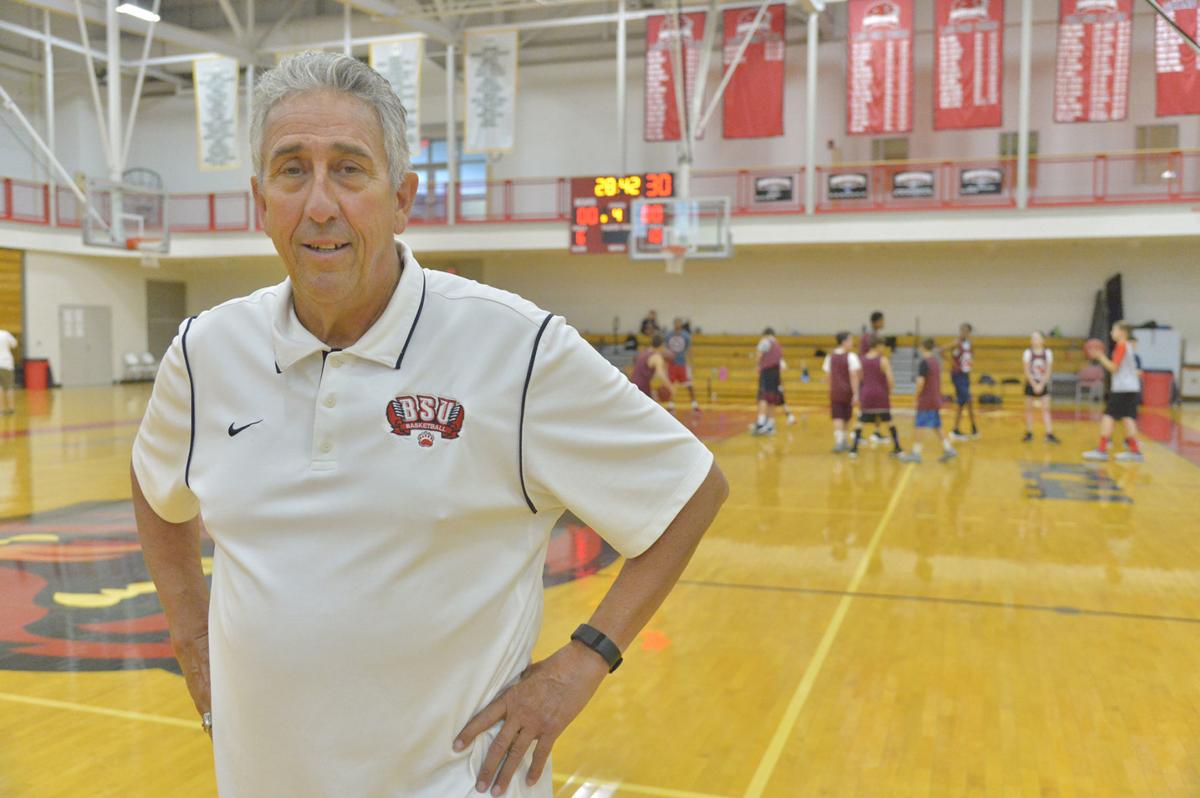 Joe Farroba, Bridgewater State University’s head men’s basketball coach, uses the university’s athletic facilities for his summer basketball camps at home, but he has a smaller gym to work in with attendees of his Anguilla camp. 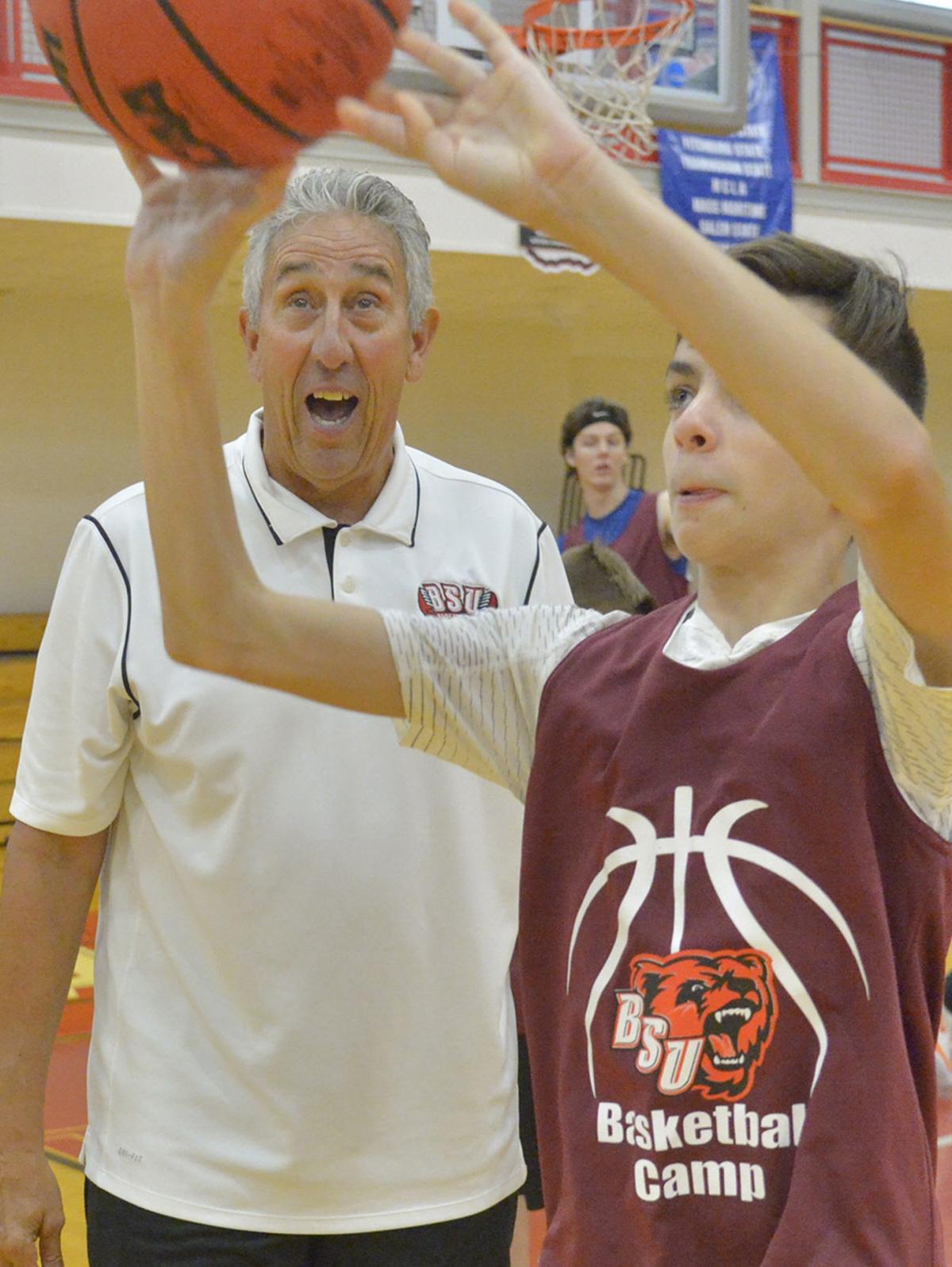 Each summer since 2011, Joe Farroba of North Attleboro, Bridgewater State University’s head men’s basketball coach, has traveled to Anguilla to conduct a basketball camp on the Caribbean island, many times at his own expense. He is seen here giving foul shooting tips to Daniel Dennehy, 12, of East Bridgewater during a 2018 camp at the university.

Joe Farroba, Bridgewater State University’s head men’s basketball coach, uses the university’s athletic facilities for his summer basketball camps at home, but he has a smaller gym to work in with attendees of his Anguilla camp.

Each summer since 2011, Joe Farroba of North Attleboro, Bridgewater State University’s head men’s basketball coach, has traveled to Anguilla to conduct a basketball camp on the Caribbean island, many times at his own expense. He is seen here giving foul shooting tips to Daniel Dennehy, 12, of East Bridgewater during a 2018 camp at the university.

That is, the Bridgewater State men’s basketball coach for 28 seasons outstanding, has become an ex-patriate, stranded in the Caribbean nation of Anguilla.

Farroba and his wife, Linda, North Attleboro residents, were on the island to map out plans with the Anguillan government for his ninth annual basketball camp to be held in August.

Now Farroba is unable to return home, as all flights out of Anguilla to other Caribbean nations and Puerto Rico, along with boat shuttles to neighboring harbors, have been suspended in the wake of the COVID-19 pandemic.

“You can take a boat or a plane, but right now our escape route might be from here to San Juan (Puerto Rico). But, we could get stuck in San Juan — we don’t know,” Farroba said from Anguilla after Sunday brunch. “Right now, they’re telling us that it would be April 2 at the earliest.”

Farroba, along with colleague and cousin Jon Donahue, the Athletic Director at the Wheeler School in Providence and his wife, had departed from New England for Anguilla on March 11, anticipating a return the following week.

“We were in church (St. Gerard Roman Catholic Church) this morning, and there were 30 of us,” Farroba said of saying his blessings for the good health of his traveling party and New Englanders. “Even when we came in, they asked us to sit separated.

The postseason itinerary was for Farroba to then travel to Atlanta for the NCAA Final Four Men’s Division I, II and III Championships, where the nation’s college coaches convene for their annual week-long clinics and meetings.

Then one sport after another — professional, college, high school and youth leagues — began a domino.

The NBA put the duration of its season on hold. Shortly thereafter, the NCAA officially announced that its men’s and women’s basketball championships would be canceled.

The NHL, Major League Soccer and Major League Baseball all suspended operations. All collegiate, high school and youth programs were put on TBA — to be announced — status.

So now all Farroba can do is idle at the beach or beside the pool at least for another two weeks, when airline officials indicate that it may be until April 2 or April 4 that transportation “might” become available.

“Right now, it looks like we can get out April 4 from here to San Juan, and then there’s a connection on JetBlue — we don’t know for sure, we’ll see,” said Farroba. “If we had left on the Saturday (March 14), we probably would not have left with everything that occurred.”

Farroba has been the men’s basketball coach at Bridgewater State since 1992, a span of 28 seasons.

Farroba has been a member of the Bridgewater State basketball family since 1986, after becoming an assistant coach under Mark Champagne. During his tenure as the Bears’ head coach, Farroba has won 398 games and taken his teams to 10 postseason tournaments, including the field for the NCAA Tournament in 1999, 2006, ’09, ’10, ’11 and ’14.

“We had a flight on the 26th of March, and obviously that got canceled,” Farroba said from his sequestered accommodations in Anguilla Sunday. “What’s really annoying is that we had no contact whatsoever from American Airlines, even to this day. They have yet to send us an alert.

“It’s bizarre. We heard from people here that American, United and Delta were getting forewarned,” Farroba said of the coronavirus and potential travel restrictions. “The latest thing is that the ports of Anguilla and St. Maarten are closed, so now the earliest date we hear now is April 2,” of departing from the Caribbean nation by air or water.

“That all remains to be seen, if they are open.”

Unfortunately for Farroba, family and friends, they had departed for Anguilla on the eve of the national crisis, before the future ramifications were known of the pandemic.

“We have toilet paper!,” Farroba said of household staples being available on the island, sending a video of stacks to his son, John, the former North Attleboro High and Bridgewater State hoopster, who relayed to him the woes of empty shelves in stores throughout the ‘Boros.

“There’s food everywhere,” Farroba added, his daughter, Justyne — another ex-Rocketeer hoopster — calling to say, “You’re better off staying where you are!”

Every summer, Farroba returns to Anguilla, where he stages a youth basketball camp for boys and girls of all ages, introducing them to the sport while providing individual and team instruction. The Anguillan Sports Ministry has been especially supportive of Farroba’s camp.

There were a pair of asymptomatic coronavirus cases on Anguilla, but tests proved to be negative. Anguillan officials are adamant about allowing incoming visitors for fear of a widespread epidemic on the island.

“The issue here is that you’re not going to get the necessary medical services, they don’t have the adequate resources if they had an outbreak,” Farroba said of the limited medical care on the island. “That is the problem. They’ve closed the borders now.

“Many of the restaurants are closed,” added Farroba, who is likely not going to be able to attend the weekly Sunday afternoon music festival. “People are playing it by ear.”

Farroba was anxiously looking forward to the NCAA Final Four in Atlanta, where the Division II and Division III men’s championships were to be staged on Saturday and Sunday, followed by the Monday-evening Division I national title game.

That’s in addition to the week-long congregation of college coaches from every corner of the nation, a smorgasboard of networking.

“Part of the reason that I come down here to Anguilla is to talk to the government about the camp, about what we need: facilities, enrollment,” Farroba said of the projected August 10 start to the daily sessions.

“Now we don’t what’s going on; we’ll wait and see what happens.”