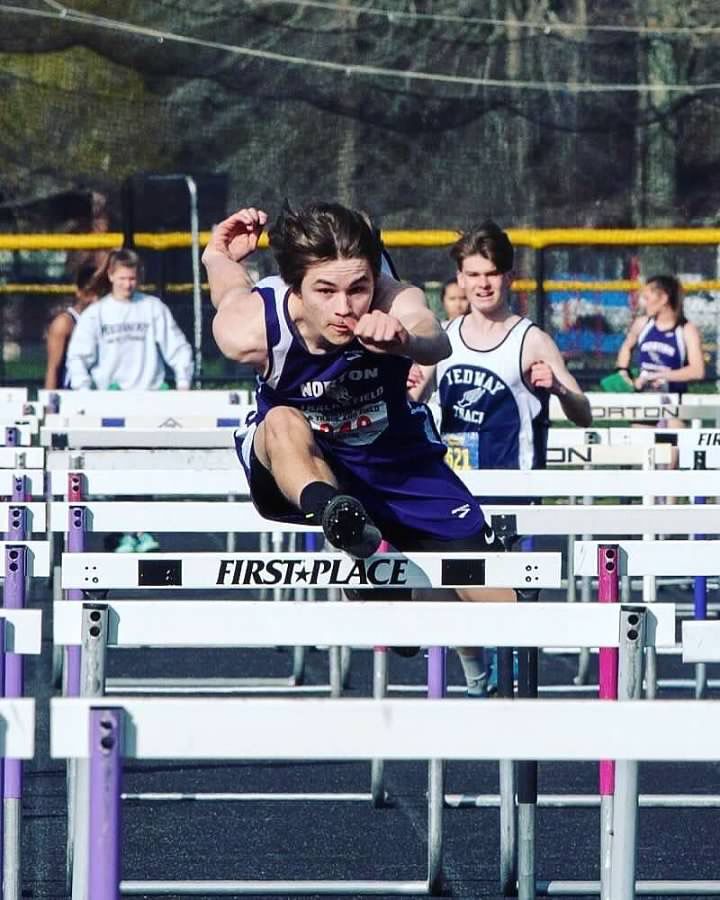 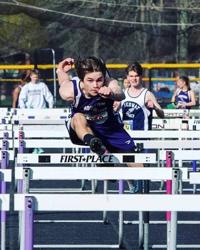 Norton High graduate Paul Wisnaskas, who has shattered many school track and field records, credits the sport for molding him into the person he is today. “With track, you have good sportsmanship and that has shaped me into the person that I’ve become,” he said. “Really, track has brought out the best in me.” 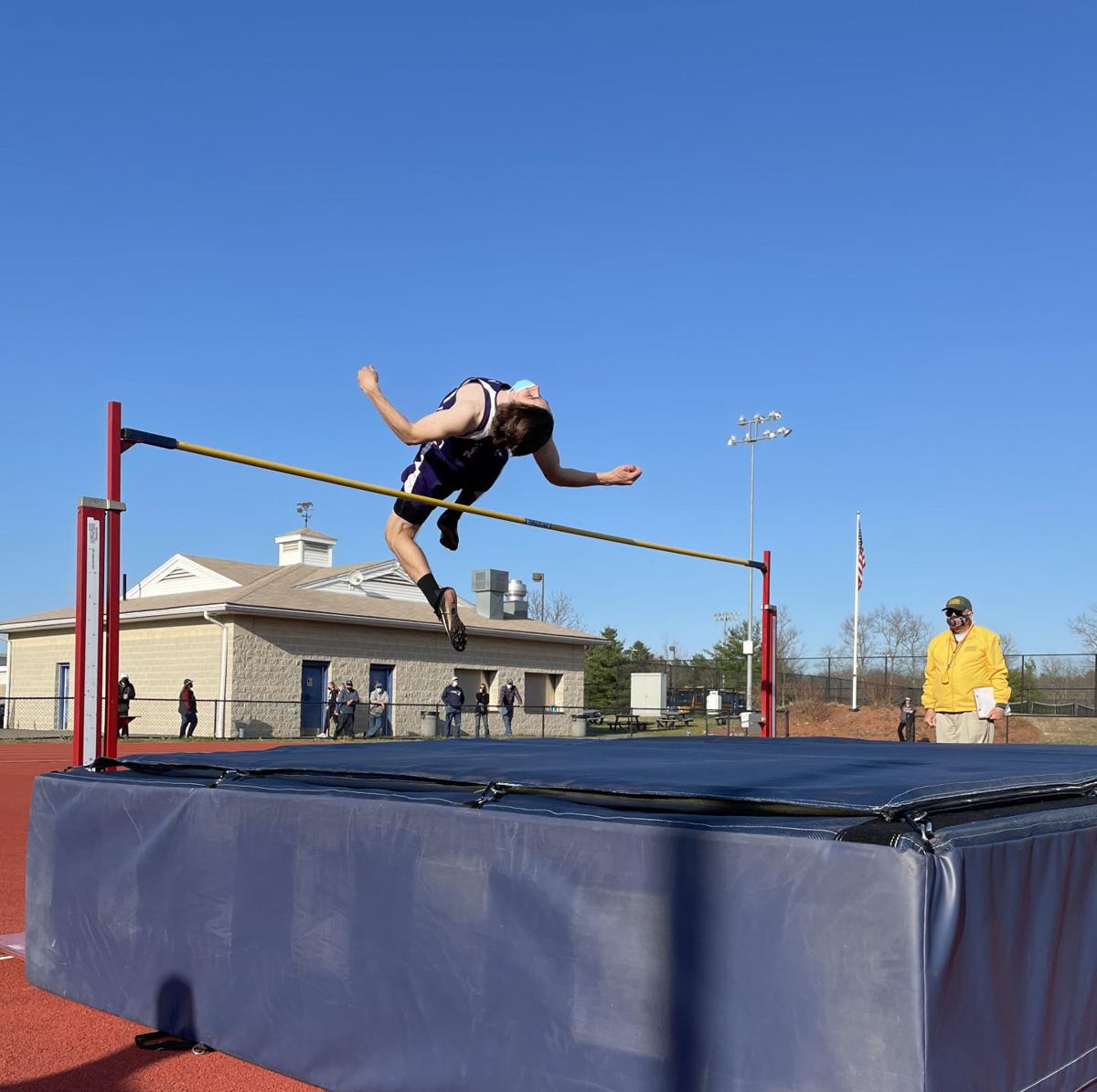 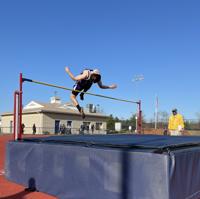 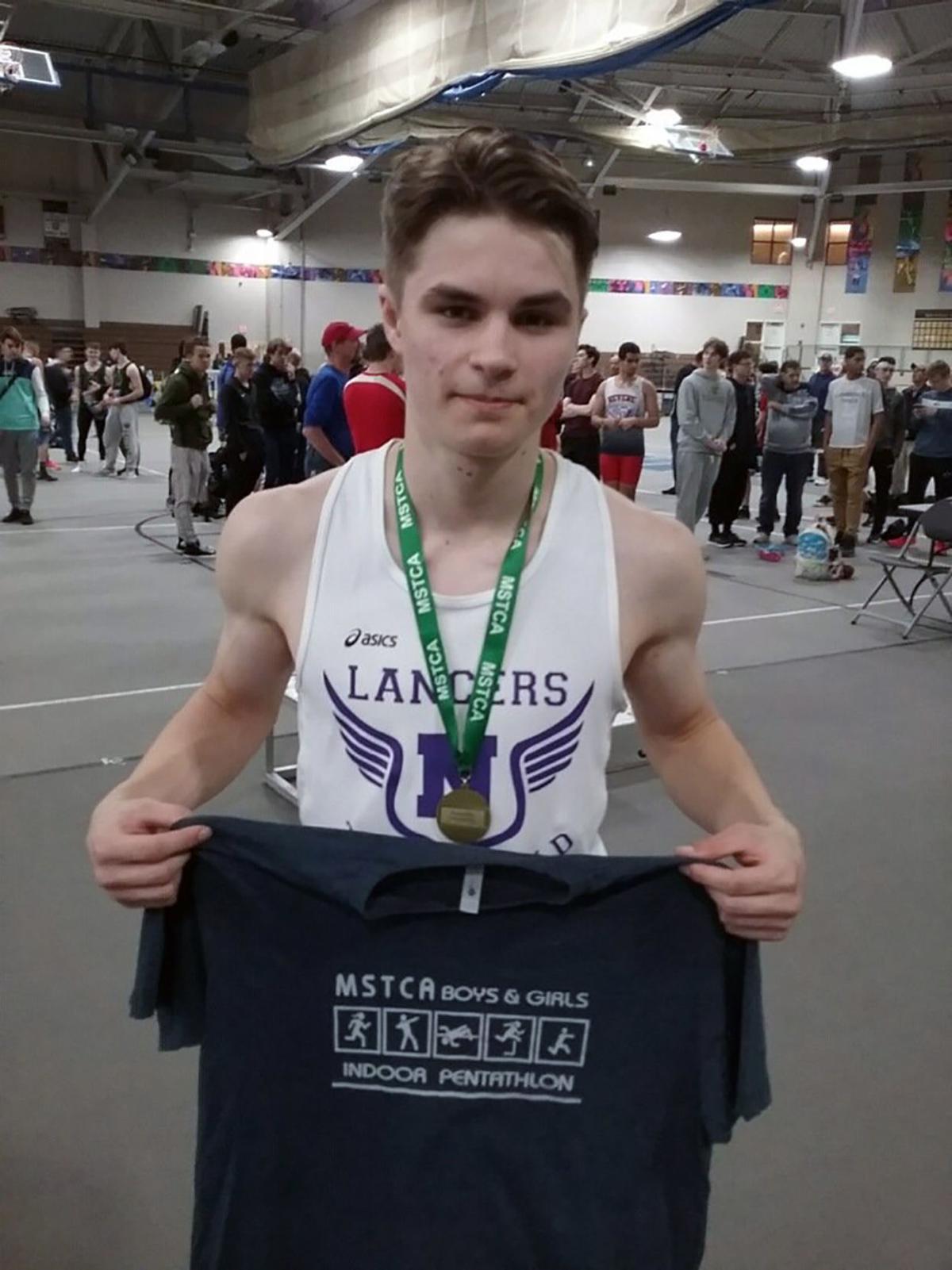 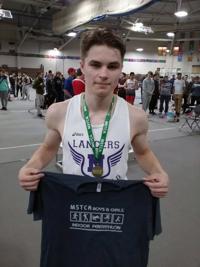 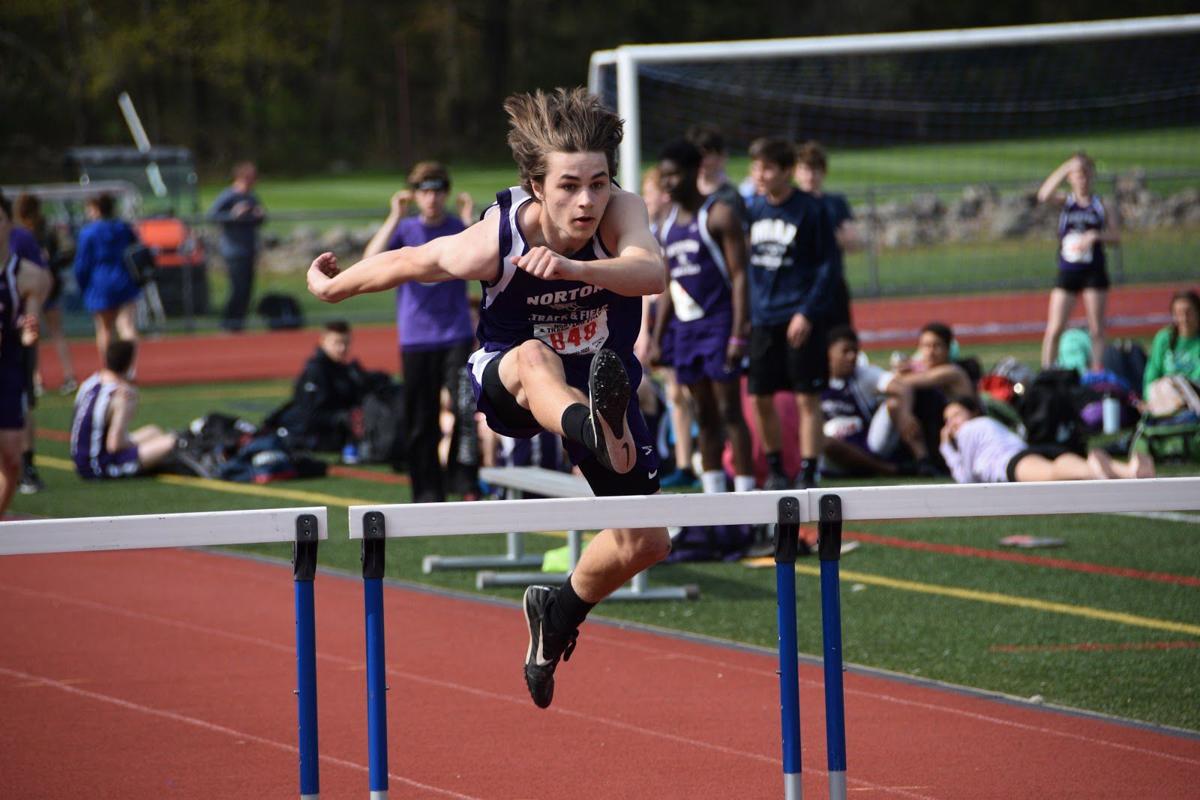 Mastering the technique and footwork of the hurdles was second nature to Norton High’s Paul Wisnaskas, who has shattered many school track and field records during his four years with the Lancers. “I picked it up pretty quickly,” Wisnaskas said of his three skips to the barriers. 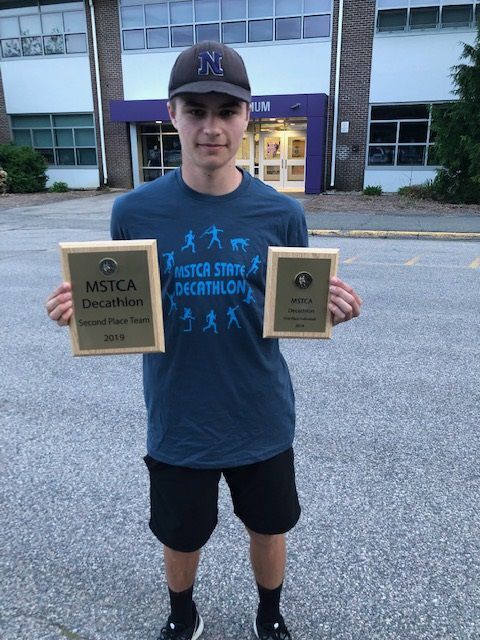 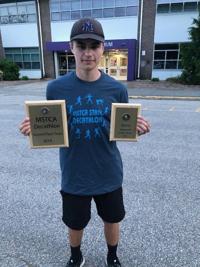 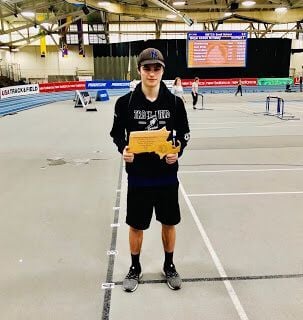 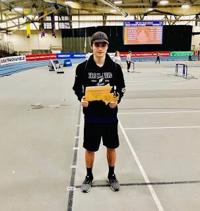 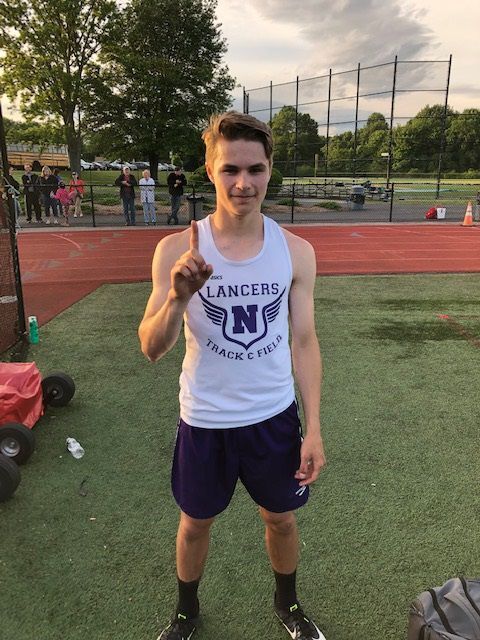 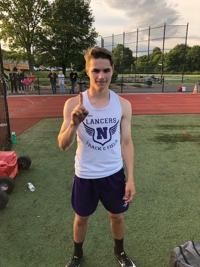 Norton High graduate Paul Wisnaskas, who has shattered many school track and field records, credits the sport for molding him into the person he is today. “With track, you have good sportsmanship and that has shaped me into the person that I’ve become,” he said. “Really, track has brought out the best in me.”

Mastering the technique and footwork of the hurdles was second nature to Norton High’s Paul Wisnaskas, who has shattered many school track and field records during his four years with the Lancers. “I picked it up pretty quickly,” Wisnaskas said of his three skips to the barriers.

The “Iceman” — Paul Wisnaskas — had cometh to Norton High, and graduated with some of the most incredible record-setting feats in Lancers’ track history.

“That nickname — ‘Iceman’ — began back in his freshman year and it just stuck with him,” said Kent Taylor, Norton High track coach. “It comes from his demeanor and disposition — he has ice in his veins and is devoid of emotion when the pressure is on. He thrives on it.”

Wisnaskas, at 6-feet and 167 pounds, stands tall as one of the greatest track athletes Norton High has seen. He placed his name as the standard bearer for the Lancers in seven spring track events and five winter track events during his illustrious career, in addition to setting the pace as the No. 1 cross country runner for the boys’ team.

“Almost every time that this athlete competed, he had the perfect day,” Taylor said.

“I’m calm before my races and I think other kids (opponents) see that and say to themselves, ‘This guy knows what he’s doing,’” Wisnaskas said of his mindset.

Wisnaskas said he started running young. Once a freshman at Norton High, he found out he was rather good at it.

“I started with cross country, then winter track and I decided on spring track instead of baseball,” he said. “I kept with it.”

Wisnaskas etched his name into the Norton High track annals four times during the abbreviated 2021 spring season, one sniped by COVID-19 restrictions on competition and then a season-ending hamstring injury.

“He did this all without a spring season of his junior year, too,” Taylor said, conceding that Wisnaskas’ potential is barely scratching the surface. “We can say with certainty that Paul Wisnaskas is the most versatile athlete in Norton boys’ track history.”

Wisnaskas erased a Lancer record of 21 years (previously held by Paul Ravinski and Camden Cleathero at 15 seconds) in the 110 hurdles at 14.74 seconds. Cleathero tied the mark four years ago and Wisnaskas bettered it by a tenth of a second.

Wisnaskas rewrote the Lancer record book in both the decathlon in 2019 (5,795 points) and pentathlon in 2019 (3,292 points). That same season, Wisnaskas was also a member of the Lancers’ record-setting triple jump relay (121-7 ½) with Jack Buchan and Corey Stalters.

He was ranked No. 1 in the Tri-Valley League in the 110 and 400 hurdles as well as the long and triple jumps, while also ranking in the top 10 in two events in which he merely tinkered, the javelin and discus.

“I remember back to my first cross country practice as a freshman and we had to run six miles, I still remember that,” Wisnaskas said of the first stage for success. “I started trying out different events in track and everybody was saying that I was pretty good at the hurdles, I had good form.”

Mastering the technique and footwork of the hurdles was second nature to him, “I picked it up pretty quickly,” Wisnaskas said of his three skips to the barriers.

He began to gravitate toward the long and triple jumps toward the end of his rookie season in training for the decathlon, finding that his footwork in those events were also smooth to the launch board.

“By the end of the outdoor track season in my sophomore year, I pretty much had done every event,” Wisnaskas said about his versatility. “I’ve always had good elasticity, it was natural.”

His tenacity and determination extended itself into the classroom where he was one of the shining academic stars of the Class of 2021. This fall, he’s heading to Northeastern University to run track for the Huskies while pursuing studies in physics and engineering.

Wisnaskas’ glimpse of greatness took shape during his sophomore outdoor track season when he won the Mass. State Track Coaches Association Decathlon with 5,795 points, a meet held at Bishop Feehan, a season in which he was also tabbed the Tri-Valley League’s Most Outstanding Track Athlete.

As a sophomore, he broke five school track records, while tying the pole vault record (10-feet), qualified for the New England Meet and ventured to North Carolina to the New Balance National Meet.

“I started breaking records my sophomore year and it was all kind of crazy,” he said of his ascension up the Lancer leaderboard. “It was like, ‘What’s going on?’”

“I don’t think he fully understood what he accomplished,” Taylor said of Wisnaskas’ springboard sophomore season, ranking No. 1 nationally in the Decathlon as a sophomore, No. 15 overall. “Confidently, I said it back then, that without a doubt, Paul will be regarded as the best track and field athlete that Norton High has ever had.”

Then the pandemic arrived. His team training and meet schedule was altered, but Wisnaskas kept on pounding the pavement of the streets of Norton and the Adams Field track at Norton High.

Wisnaskas followed in the stops of his dad William, a runner at Whitman-Hanson High, and uncle Scott Wsinaskas, who ran at Northeastern University.

Football and basketball were never his fortes, and he had a running partner in his elder brother, Alex, a 2018 Norton High graduate now at Northeastern, who ran cross country and track.

“Running in college has always been a goal of mine,” Wisnaskas said. “I really got serious about track and became more competitive during his sophomore year.”

The pandemic sidelined Wisnaskas for the 2020 spring track season, canceling all local, regional and national meets.

“Maybe I felt a little bit of trepidation going into my senior year because of that,” he said, “but I had been doing my offseason, preseason sort of training for cross country, and I was able to train and come back with a good base.

“I missed that competition though, that good competition, having expectations for myself,” Wisnaskas added of the TVL meets and the state meets at the Reggie Lewis Center in Boston.

Wisnaskas credits track for molding him into the person he is today.

“With track, you have good sportsmanship and that has shaped me into the person that I’ve become,” he said. “Really, track has brought out the best in me.”