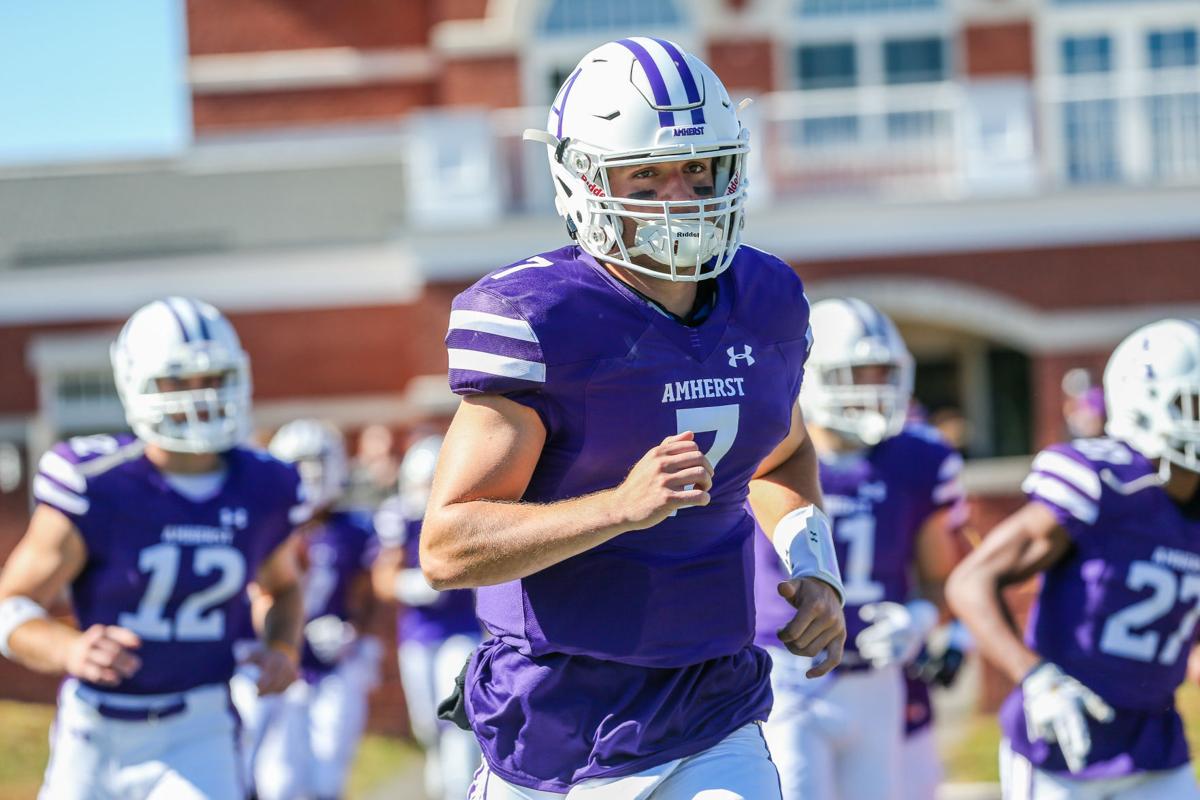 Amherst College quarterback Chad Peterson of North Attleboro runs out onto the field during an Oct. 5, 2019 game against Middlebury College. Amherst won 34-31 in double overtime. 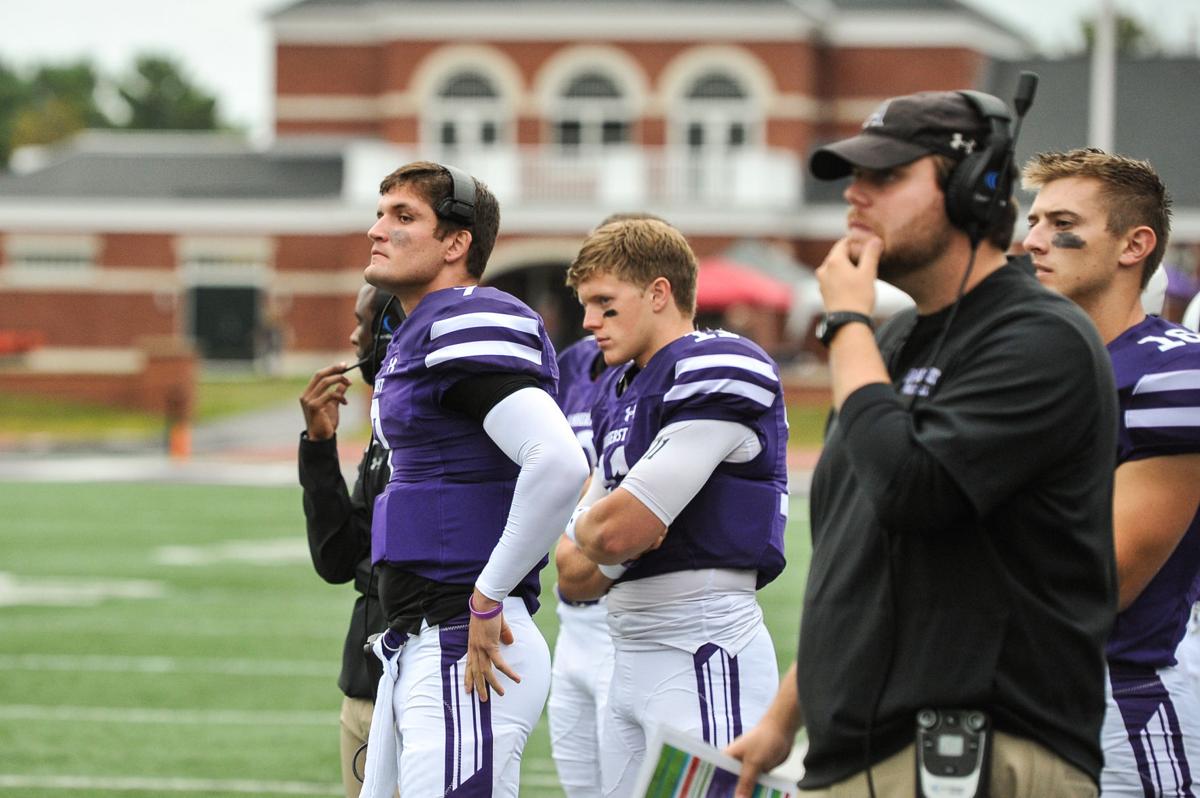 Amherst College’s Chad Peterson of North Attleboro, seen above left watching from the sideline during a game last season, had planned to move into the starting quarterback role for Amherst this season, but the pandemic led him to “opt-out” as a student-athlete for the fall semester. In doing so, he retains two years of NCAA athletic eligibility when, hopefully, the football season resumes in 2021. “I’m trying to get used to not playing football on Saturdays in the fall,” he said. 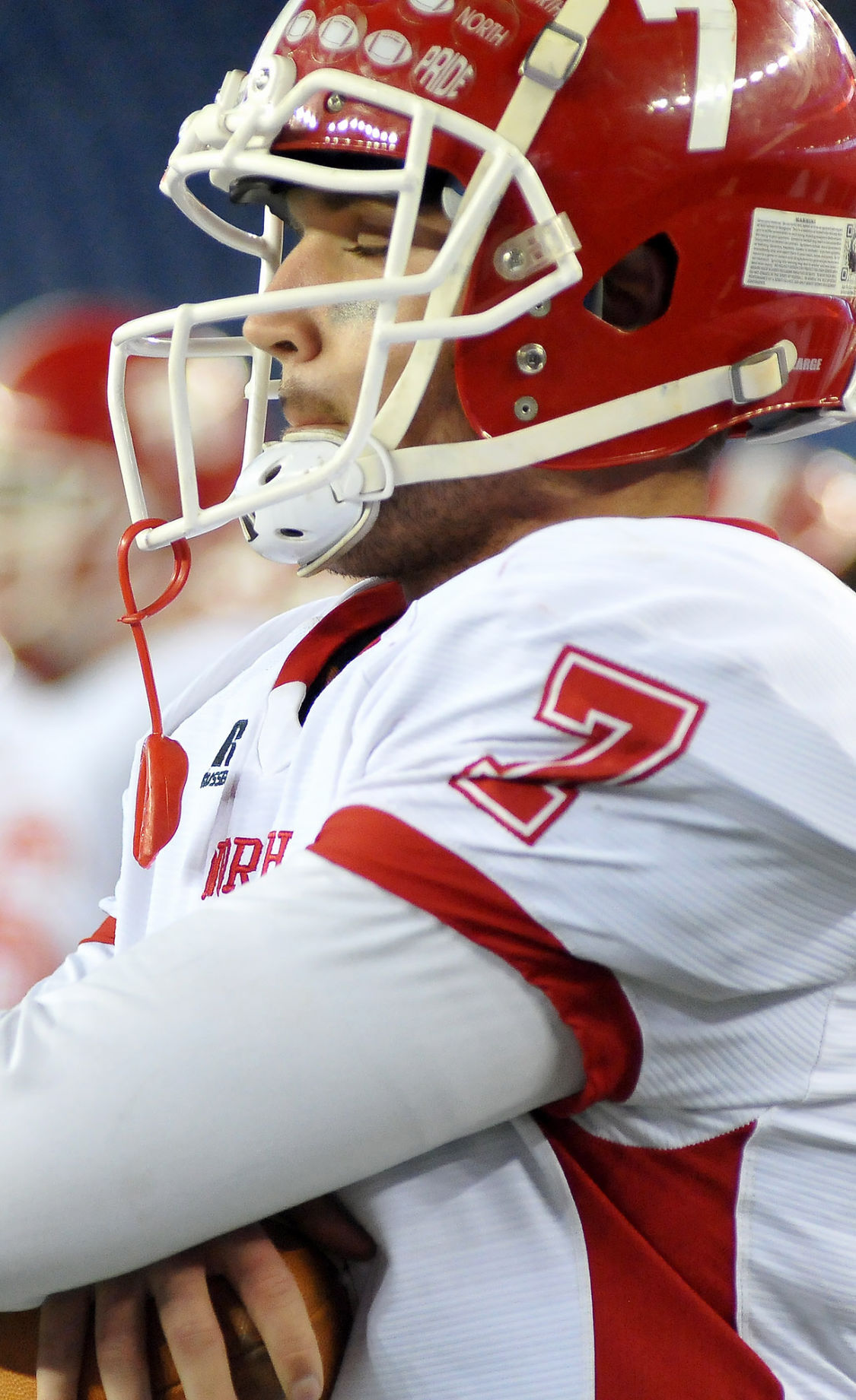 Chad Peterson looks on from the sideline near the end of the MIAA Div. 3 Super Bowl game against St. John’s at Gillette Stadium in Dec. 2017. North Attleboro lost 35-33. 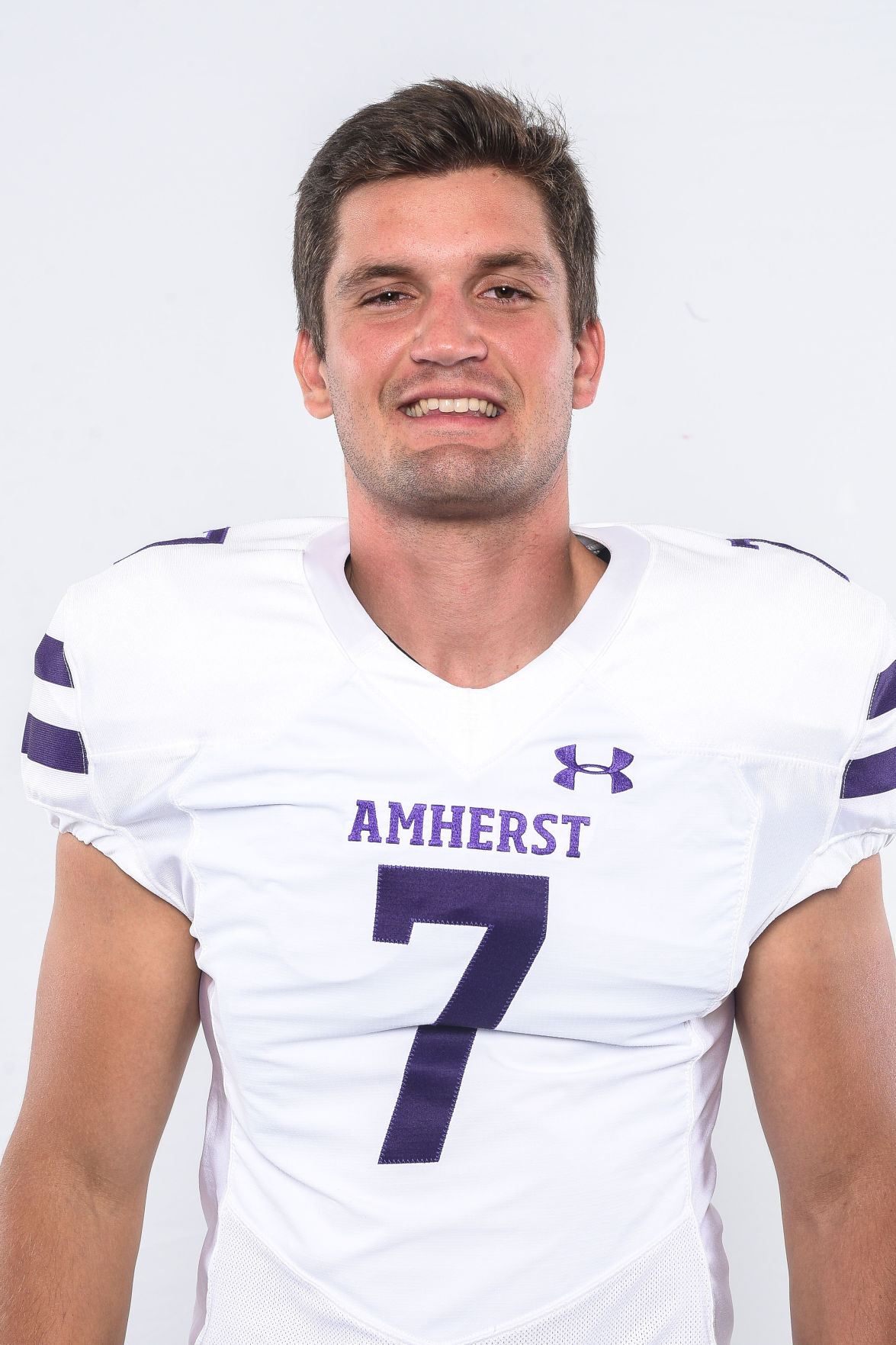 Amherst College quarterback Chad Peterson of North Attleboro runs out onto the field during an Oct. 5, 2019 game against Middlebury College. Amherst won 34-31 in double overtime.

Amherst College’s Chad Peterson of North Attleboro, seen above left watching from the sideline during a game last season, had planned to move into the starting quarterback role for Amherst this season, but the pandemic led him to “opt-out” as a student-athlete for the fall semester. In doing so, he retains two years of NCAA athletic eligibility when, hopefully, the football season resumes in 2021. “I’m trying to get used to not playing football on Saturdays in the fall,” he said.

Chad Peterson looks on from the sideline near the end of the MIAA Div. 3 Super Bowl game against St. John’s at Gillette Stadium in Dec. 2017. North Attleboro lost 35-33.

NORTH ATTLEBORO — This could have been the fall season that Chad Peterson would have stood behind the center on Amherst College’s offensive line, taken the snaps and guided the Mammoths to points and victories.

But for the first time since his introduction to football in the North Attleboro Pop Warner Football League nearly 15 years ago, Peterson will not be playing football.

“I first started playing football when I was in the third grade, eight or nine years old,” Peterson said. “Now it’s definitely different.”

The junior quarterback served his apprenticeship during the 2018 and 2019 seasons, but then had his spring training on campus, his summer training program disrupted and his return to campus for preseason training as a student-athlete with the Mammoths canceled due to the coronavirus pandemic.

In view of the circumstances, Peterson opted to “opt out” as a student-athlete at Amherst for the fall semester, retaining two years of NCAA athletic eligibility when, hopefully, the football season will resume in 2021.

“I’m trying to get used to not playing football on Saturdays in the fall,” Peterson said, his life now different without a football in his hands, the game plan preparation, practicing against a scout team and all of the adjustments without having a countdown to kickoff.

“Back in March, we were one of the first schools to cancel and with students being sent home, so it kind ran through our minds that there was always the possibility that we weren’t going to play,” Peterson said. “When we found out, it was really unfortunate.”

He planned to move into the starting quarterback role at Amherst this year.

“In the spring, I was preparing like I was going to be the starter,” he said. “Hopefully that works out. Now, we don’t really know. We’re just waiting for next year.”

Peterson, a 2018 graduate from North Attleboro High, was one of the most decorated and prolific quarterbacks among the many who have suited up for the Rocketeers through its tradition-rich history.

Among the roster of Rocketeer quarterback greats — from Coach Bob Guthrie ushering the Big Red into the modern era of North Attleboro High School football with Jack Rioux to the present day signal-caller Tyler DeMattio, who earned the MVP of the Thanksgiving Day game with Attleboro High as a freshman under Coach Donny Johnson — Peterson ranks among the best of the Big Red best.

“He was the complete package,” Johnson said of Peterson. “I remember him as a sophomore and he had the physical skills, he had emotional maturity. A lot of kids as sophomores are just not ready to take over a program and play in the big games that we play all the time. He had a level of maturity that’s rare for a sophomore.”

Johnson added that Peterson’s passing touch was a delight to watch. Peterson could throw the deep ball, throw under pressure, riddle a defense with screen passes and throw over the middle — and he could run, too.

“He had a high football IQ, he understood what every player was doing on every play,” Johnson added. “Not just that, but he was a competitor and a team leader — probably the best QB ever at North.”

At Amherst, Peterson played in two games for Mammoths (formerly the Lord Jeffs) last October, a 22-point victory over Bowdoin and a three-point loss to Wesleyan.

Losing the 2020 football season was not a surprise once students were dispatched from campus in mid-March due to the coronavirus. Not only did Amherst suspend the spring calendar of athletic events, the New England Small College Athletic Conference, which includes Amherst, announced it would cancel all conference competition scheduled for this fall as a result of the pandemic.

The 11 schools in the Division III conference — Amherst is a member of NESCAC with Bates, Bowdoin, Colby, Connecticut, Hamilton, Middlebury, Trinity and Williams colleges along with Tufts and Wesleyan universities — planned to bring students back to campus this fall with restrictions including physical-distancing protocols, limits on travel on and off campus, and limits on the size of on-campus gatherings. The fall season affects other fall athletic programs at Amherst, including football men’s and women’s soccer, men’s and women’s golf, men’s and women’s cross-country running and men’s and women’s tennis.

NESCAC plans to “seek creative ways to provide meaningful opportunities for our students during the upcoming academic year,” according to the statement from the Presidents Council. The college presidents have agreed to modify some NESCAC rules so coaches and students can pursue practice and training opportunities outside the traditional season, “in accordance with the rules of each member institution and local health directives.”

While losing the 2020 football season was one matter, losing a year of athletic eligibility prompted Peterson to consider his options, one of which is to withdraw from Amherst for the fall semester and still be eligible for the 2022 fall football season with a semester of eligibility remaining.

“I’m not enrolled in classes so that I can do an extra semester at the end,” Peterson said of his plans to enroll for the start of the second semester in January. “The tricky part was that Amherst doesn’t have a grad school or masters (degree) programs, so I would have to finish a fourth year as an undergraduate.”

Peterson is maintaining a regular workout regimen, packaged by the Amherst football staff.

“I’m staying on top of that and being ready for whenever the time comes for me to play again, which most likely will be next fall,” he said. “My workouts have been pretty consistent with what I would have been doing had we been at school. It kind of hinders our development, not being able to work with the coaches through the spring and summer.”

Peterson said the team had a tough season in 2019.

“We had a lot of tough, close losses, a couple of games at the end of the season that I don’t think we should have lost,” he said. “We didn’t have a great year (4-5), but we had a lot of guys like myself coming back and now taking the semester off in order to play another year. Hopefully, it will be an advantage next fall, technically with fifth-year seniors.”

On being home this semester, Peterson said “it’s different,” adding that there aren’t any Big Red football games for him to attend as the MIAA similarly canceled football from the fall calendar due to the pandemic.

“It’s been tough, not playing and not knowing what the future will look like,” Peterson said, hoping his career hasn’t ended. “The coaching staff (at Amherst) has done a really good job of keeping us involved, provided us all of the resources to stay on top of everything when the time comes. A lot depends on COVID and what happens at school.”

“I went to the Thanksgiving Day game last year, but surprisingly, for me playing it seems like a very long time ago. It felt like a different world when I played,” he said.

“My passion for the game hasn’t changed. It’s definitely different playing in college – it’s a bigger time commitment, practices and games. I’m in a really good spot with my coaches, my teammates and the team. I still look forward to playing next fall.”