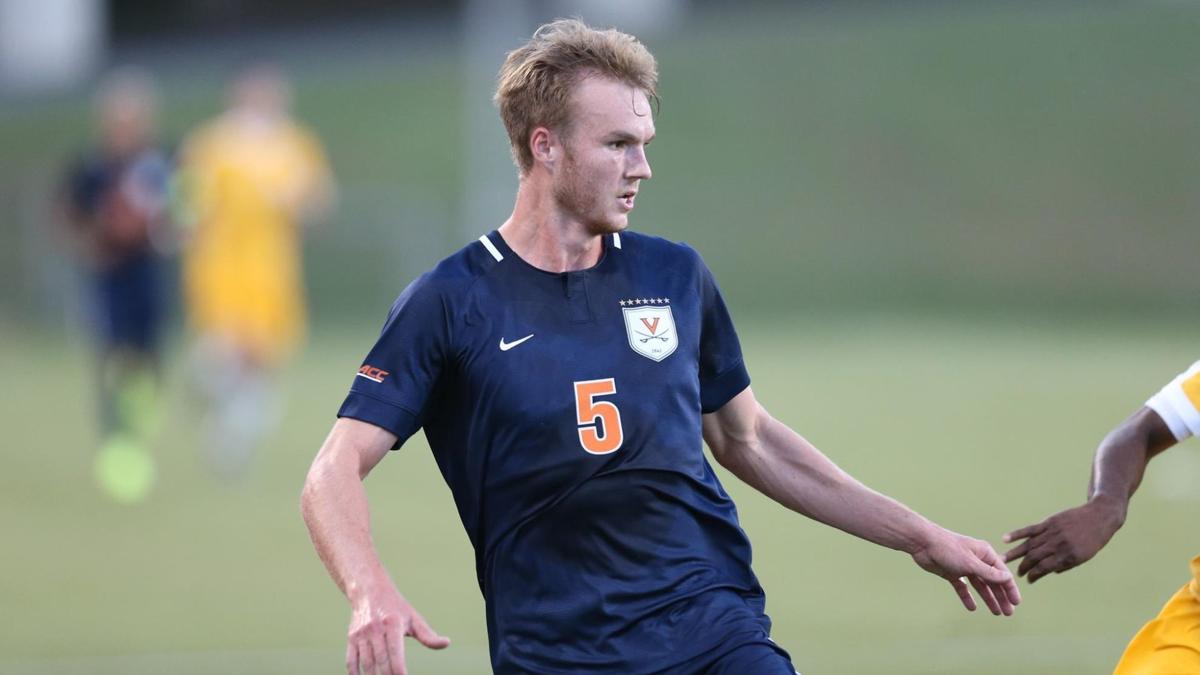 Henry Kessler, who was selected by the New England Revolution with the No. 6 overall pick in Thursday’s MLS Superdraft, is shown playing defense for the University of Virginia men’s soccer team. 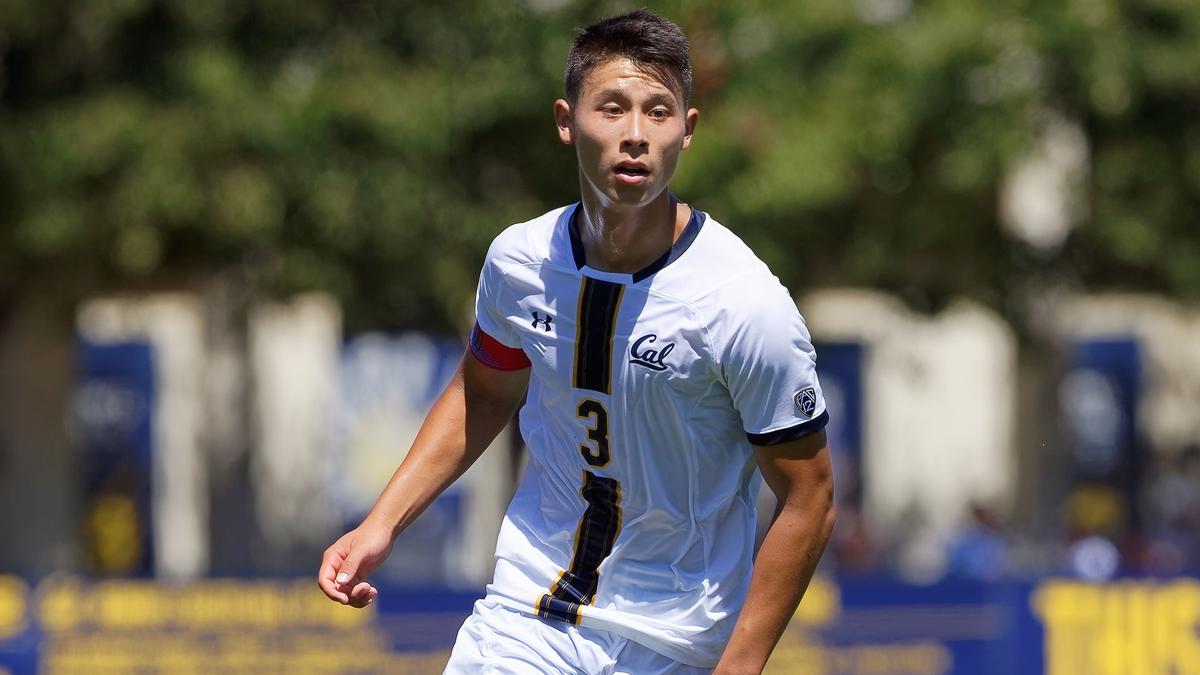 Simon Lekressner, who was selected by the New England Revolution in Thursday’s MLS Superdraft, is shown playing defense for the University of California. 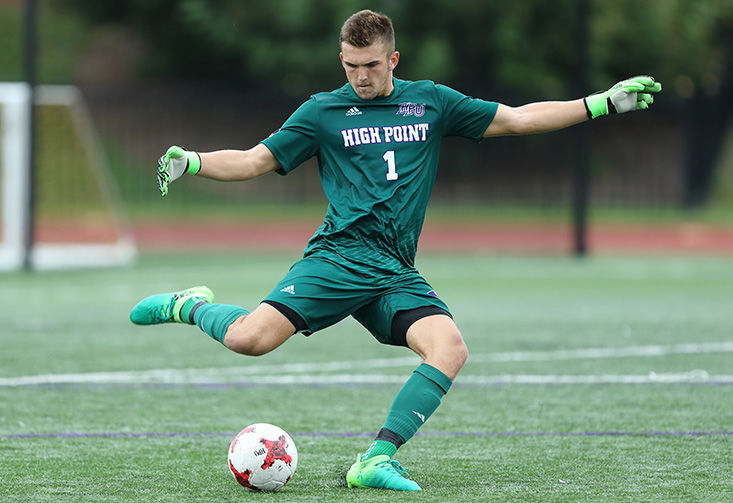 High Point University goaltender Keegan Meyer launches a goal kick in an Aug. 2017 match against Howard. Meyer was drafted by the Revolution in the second round of the MLS Superdraft Thursday.

Henry Kessler, who was selected by the New England Revolution with the No. 6 overall pick in Thursday’s MLS Superdraft, is shown playing defense for the University of Virginia men’s soccer team.

Simon Lekressner, who was selected by the New England Revolution in Thursday’s MLS Superdraft, is shown playing defense for the University of California.

High Point University goaltender Keegan Meyer launches a goal kick in an Aug. 2017 match against Howard. Meyer was drafted by the Revolution in the second round of the MLS Superdraft Thursday.

FOXBORO — There was little doubt in the mind of New England Revolution coach Bruce Arena that Henry Kessler deserved to play in Major League Soccer.

The doubt was whether Kessler would be available in the MLS Draft Thursday when the Revolution were summoned to make a selection.

“The message to Henry is, we have a great situation here in New England,” Arena said. “He’s going to come in and compete with some veteran defenders. Regardless of where he positions himself on the roster, he’s going to have opportunities to play this year, whether it’s with the first team or the second team.

“Whatever it is, it’s going to be left up to him.”

“He was absolutely our first choice of player to have,” Arena added. “If we picked No. 1, we would’ve picked him. We were a little concerned after the first two picks. We were trying to move up in the draft as well, but that didn’t happen.

“We were very fortunate he was available at No. 6, and we jumped on it immediately.”

“He’s a player that we think has great potential,” Arena said of Kessler. “He has good size for a defender, is smart, good communicator on the field, good passer of the ball, knows how to step into the midfield and win tackles.

“We think he’s a player with a lot of potential. We have a wonderful situation now with our first team and our second team. We believe that the players that we took today in the draft will have an opportunity to play an awful lot this next year, whether it’s with the first team or the second team.”

The 21-year-old Kessler appeared in 52 matches for the Cavaliers, accumulating more than 4,000 minutes during the 2017-19 seasons. The 6-foot-4 center back started and played 90 minutes in each of Virginia’s 24 matches during his junior campaign in 2019, which culminated in an ACC title and an appearance in the NCAA College Cup Championship.

Kessler was named a MAC Hermann Trophy semifinalist after anchoring Virginia’s back line to 12 shutout wins and an NCAA-best 21 victories, while the backline’s 0.53 goals-against average ranked No. 2 nationally among Division I teams. His additional accolades included an ACC Tournament MVP, and All-ACC First Team and All-Region First Team honors.

The 21-year-old Lekressner, a 5-foot-8 defender, posted career highs in starts (18) and goals (5) during his senior season with the University of California. He was named to the All-Pac 12 First Team and All-Far West Region Second Team. A native of Bellevue, Wash., Lekressner made 65 appearances with the Golden Bears during the 2016-19 seasons. He accounted for eight goals and five assists during his career.

The 6-foot-3 Meyer, a native of Silver Springs, Md., appeared in 74 matches in net for High Point University during four seasons. The 22-year-old owns the Panthers’ career record for shutouts with 27. He was named to the Big South All-Conference team three times during the 2017-19 seasons. As a redshirt senior, Meyer started and played 90 minutes in each of the Panthers’ 20 games, registering 13 wins with seven shutouts, 75 saves, and a .743 save percentage.

“The three players we selected are coming into the Revolution at a time that is simply an outstanding environment,” Arena said. “We believe that all three of them have potential one day to be steady performers on our first team. But they’re going to need some time to develop. Whether it’s in the short-term or the long-term remains to be seen.”

Now Arena has the task of reshaping and revising the Revolution roster with training camp around the corner.

“I think the second half of the (2019) season was pretty solid for our team,” said Arena. “We added players at positions we think we needed to improve. I think that was all accomplished. We’re excited as a coaching staff to have an opportunity to be in preseason with this group and move them along.

“But at this point we have a roster that should have, in theory, right now 26 players that are signed, plus the three players that we selected. We’re not closed to continuing to look at ways to improve the roster.”