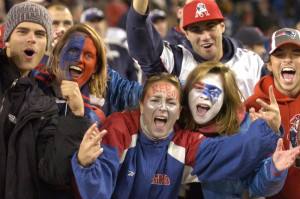 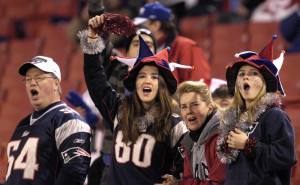 Patriots fans cheer during a game last December. This year, some season ticket holders are selling their seats in order to recoup some of the cost, which averages $117.84 per ticket. (Staff file photo by Keith Nordstrom)

Patriots fans cheer during a game last December. This year, some season ticket holders are selling their seats in order to recoup some of the cost, which averages $117.84 per ticket. (Staff file photo by Keith Nordstrom)

FOXBORO - The economy is faltering and New England Patriots' fans are not immune to the negative effects.

A Patriots' spokesman said that season ticket renewals are holding steady, but many fans say they are selling their tickets to help recoup costs.

"My wife and I are only going to two games," said Jim McElroy, 51, a machine repair business owner from Wrentham. "We sold the other tickets because it's just too expensive to go - especially when you factor in the parking, which is up to $50 now. It's crazy."

McElroy, who has had four season tickets for more than 20 years, said this is the first year he has sold so many of his tickets, which cost $125 each last year. This year, they're up to $169 each.

"That's a big increase, especially when you times it by four," he said. "I was pretty shocked when I got the invoice. I didn't think they'd be going up that much."

John Carey, 50, a pharmacist from North Attleboro, found a way to address that challenge.

Carey, who shares two season tickets with his brother, said that he sold his tickets as a two-game package, with buyers having to purchase a preseason game if they wanted to buy tickets to a regular-season game.

Like McElroy, Carey's tickets in Section 107 increased in price from $125 a piece to $169. He and his brother are using tickets for six of the games and sold the rest.

"I guess you could look at the positive side of this, though," Carey added. "When season ticket holders sell their tickets, it gives people who otherwise wouldn't get a chance to see a game the opportunity to do so."

Jason Thomas, 19, from Carver, is one of those lucky people.

"One of the guys my dad works with is a season ticket holder and he is really tight on money, I guess, so he had to sell some of his tickets," said Thomas, a laborer and part-time student. "I feel bad for him, but I'm happy my dad was able to get the tickets and that he gave them to me as an early birthday present."

Thomas said he was "a little bummed" that he wasn't getting to see quarterback Tom Brady, who is out for the season with a knee injury.

"It's not as exciting without him, but I'm still looking forward to the game," he said while tailgating in one of the stadium parking lots before Sunday's 1 p.m. kickoff against the Miami Dolphins. "My dad said I had to be on my best behavior, since his friend could lose his tickets if we do anything bad."

McElroy said it is for that very reason that he only sells his tickets to family and friends.

"I only sell them to people I trust because I don't want anything to happen, where I would lose them."

Patriots' spokesman Stacey James said that even with the downturn in the economy, the renewal rate for season tickets is 98 percent, the same as it has been for many years.

When tickets are not renewed, it's usually because the season ticket holder has died or moved, he said, adding that there are more than 50,000 people on a waiting list to purchase season tickets.

A recently-released study on National Football League ticket prices by Team Marketing Report of Northbrook, Ill., found that the average NFL ticket price is $72.20, up $5, or 7.9 percent from last year.

New England Patriots season tickets are the most expensive in the league, the report found, with an average price of $117.84 this season, up 29.6 percent from last year's average price.

However, James said the findings are misleading, since the study doesn't include personal seat license fees that are charged by several other teams. He also pointed out that the stadium was not built with public funding, as has been the case with other NFL venues.