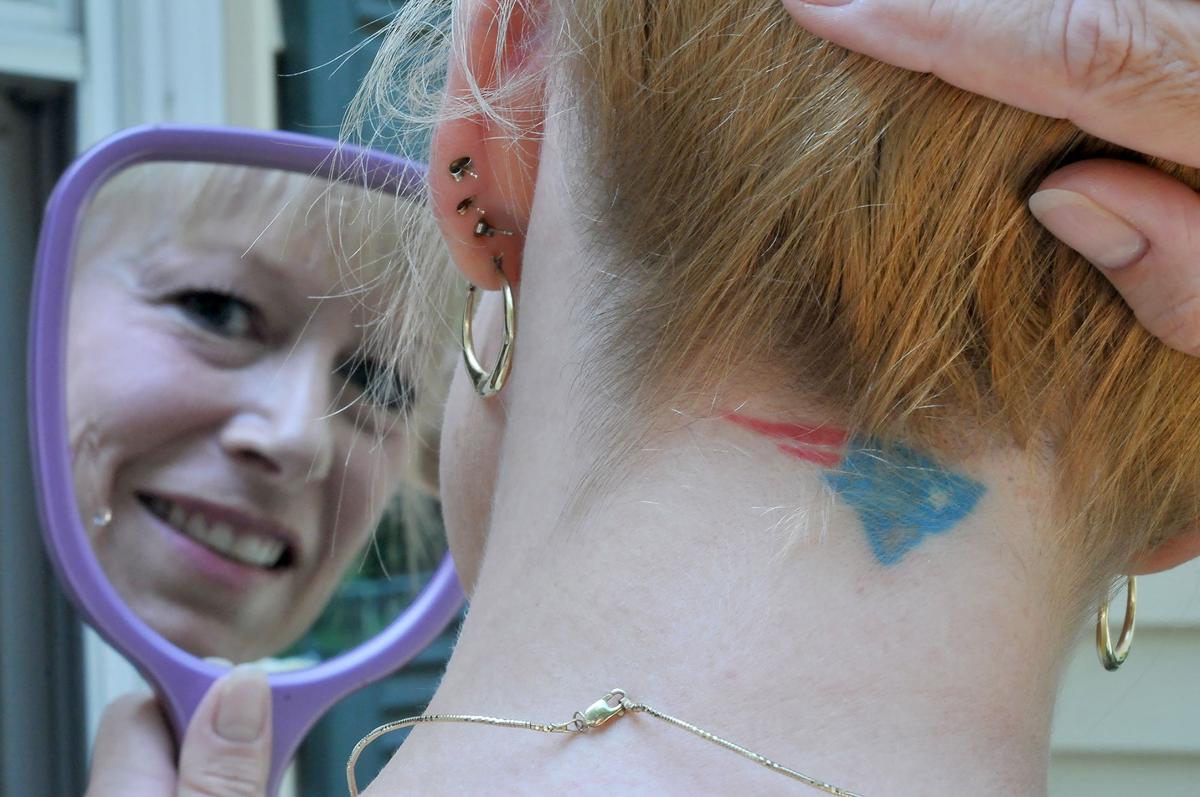 Lisa Forrester of Wrentham shows off the Patriots tattoo on the back of her neck. 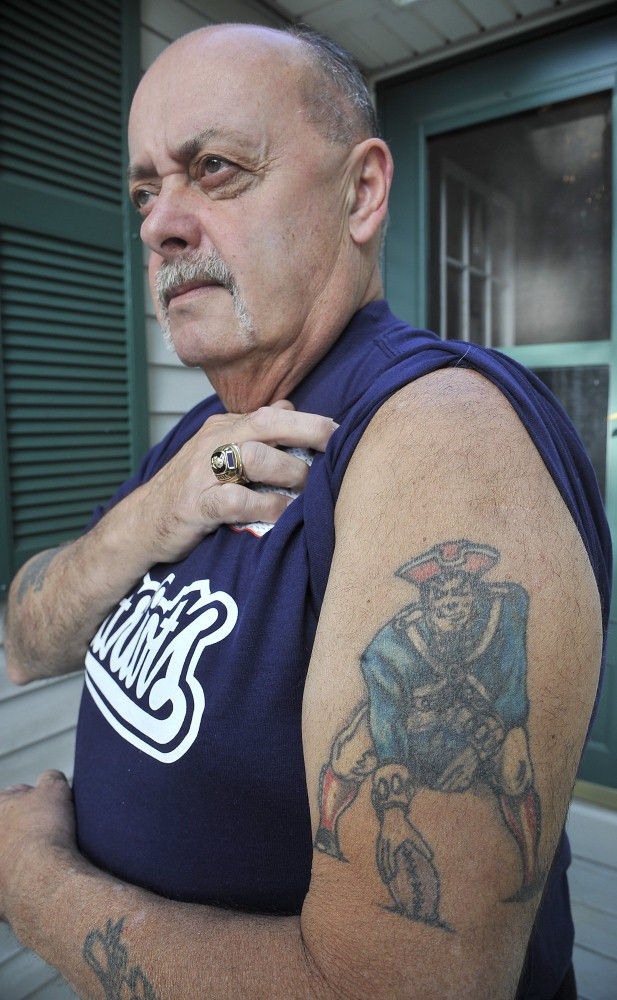 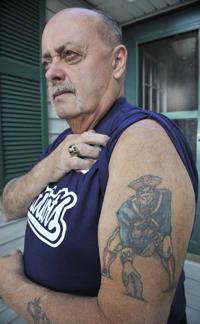 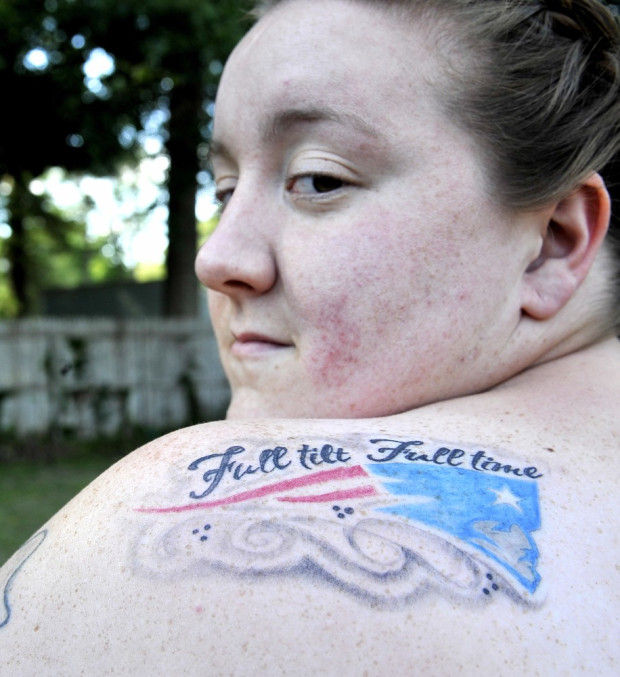 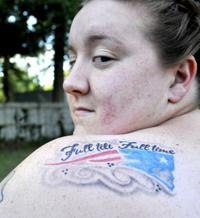 Melissa Rose of Norton is a self-proclaimed Patriots diehard. 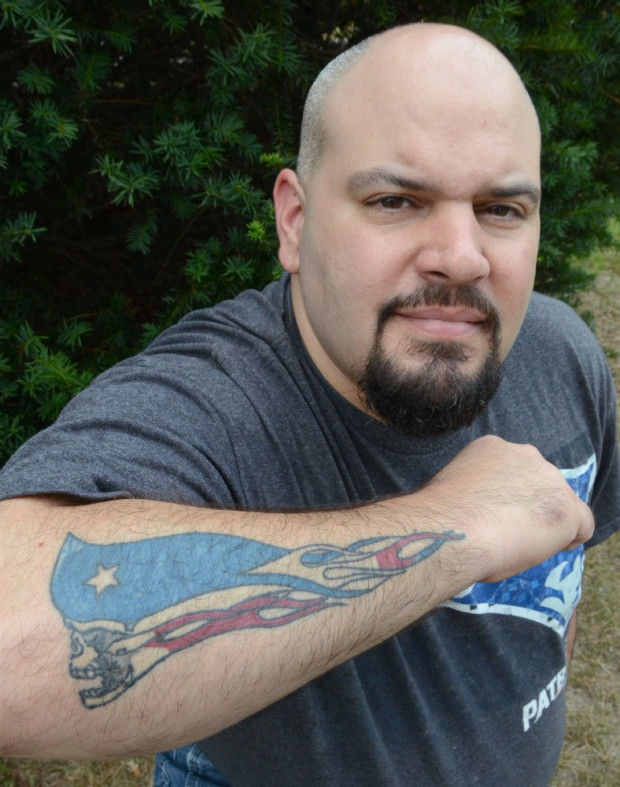 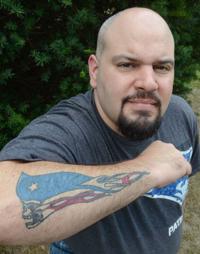 Lisa Forrester of Wrentham shows off the Patriots tattoo on the back of her neck.

Melissa Rose of Norton is a self-proclaimed Patriots diehard.

For diehard New England Patriots fans, love for their team is more than just skin deep.

From jerseys, hats and gloves to license plates and inflatable lawn ornaments and flags, there are dozens of ways that fans can show off their team pride, but some hardcore fans have taken to showing off their devotion to their favorite team by getting inked with a Patriots tattoo.

Wrentham resident Lisa Forrester, 45, was a season-ticket holder for eight years from 1996 to 2004, and saw plenty of Patriots ink during her time tailgating.

"Everyone I tailgated with was branded," she said. "I really wanted one."

Though men sported them on their arms or legs, Forrester wasn't sure what the best placement was for her own tattoo, especially since she wanted to be able to cover it up if she needed to but still be able to easily display her ink at Patriots games.

Ultimately, in 1996, she elected to get the Patriots logo - the Flying Elvis - inked on the back of her neck, up close to her hairline. When she wants to hide it, she leaves her hair down but when she wants to show it off, she pulls her hair up.

The location for her only tattoo has worked out well, as she was able to show it off when she tailgated. When she was working, and now, as a stay-at-home mother of three, she can easily hide it.

"It's hidden, I love it and I would do it all over again in a second," she said.

John Collito, 40, of Attleboro has been a fan of the Patriots for his whole life and has stuck with the team through thick and thin.

"I remember the days when they were a laughing stock," he said.

Collito has several tattoos, including ones for his wife and two boys, and said that they all mean something to him and he wanted the same for his Patriots tattoo. He has seen plenty of Patriots tattoos, usually of the logo or Pat Patriot, but said he wanted something different and unique.

A few years ago, he was searching the Internet when he saw a design that combined the Patriots logo with a skull and was struck by how perfect it was for him.

"I was looking for one that meant something to me," he said. "That's who I am."

He got the design inked on his right arm two years ago and is happy to have a piece of unique fan art.

"I've seen some but I've never seen anyone with one like mine," he said.

Gary Cameron, 64, of Norton, has had season tickets to the Patriots for 37 years and it was a no-brainer to get Pat Patriot inked on his arm more than 20 years ago.

"I've just always been a diehard Patriots fan," he said. "I stick with them through thick and thin."

Cameron, who was a runner-up for Patriots Fan of the Year last year, has his fair share of Patriots gear and even had his truck professionally airbrushed with Patriots images.

For Cameron, who has a few other tattoos, the decision to get the tattoo was simple and he has no regrets.

Melissa Rose, 26, of Norton, has followed the Patriots since she was a kid and her love for the team has gotten stronger as time has gone on.

"I don't know if diehard is enough of a word," she said.

Though she just got her tattoo a few months ago, she's been planning it for years, taking her time to make sure she got it just right.

"It's hard to get a Pats tattoo that's not like everyone else's Pats tattoo," she said.

She and her tattoo artist worked to create something that was a little different and unique, so they went for an airbrushed, softer look of the logo. Since Rose is a huge fan of Tedy Bruschi, she added the words "full tilt full time" to go with it.

Rose has no regrets about immortalizing her love for the Patriots on her shoulder.

"They're never going to do anything minimize my love," she said.

Bellingham resident Nick Urmston, 24, has had his Patriots tattoo for just over two years and has a Bruins tattoo just above it.

His tattoo, on his upper arm, is of the Flying Elvis, but the design of the tattoo makes it look like his skin is ripped, with the tattoo below the surface peeking out. His Bruins tattoo, which he got about a year ago, follows the same design.

"I liked the design with the skin rip because it wasn't like any another Patriots tattoo I have seen on anyone else," he said.

Urmston said he's been a Patriots fan since he was a boy and fondly remembers spending time with his dad catching the games.

"It was always my bonding time with my dad, we would sit and watch the games together and every now and again would go to a game," he said.

The happy memories of watching games with his dad was a motivating factor for getting the tattoo.

"I knew that my love for the team mixed with the memories of watching the games with my dad would make it a cherished memory embedded within my skin," he said.

Urmston said he has no regrets about getting the tattoo but joked that he uses the tattoo as a motivating factor when things aren't going well for the team on the field.

"My favorite threat to the team is I jokingly yell at the TV that if they lose I'm getting it removed, but I love my Patriots tattoo and I would never do something like that," he said.

When The Sun Chronicle sent out the request for fans with New England Patriots tattoos, we h…