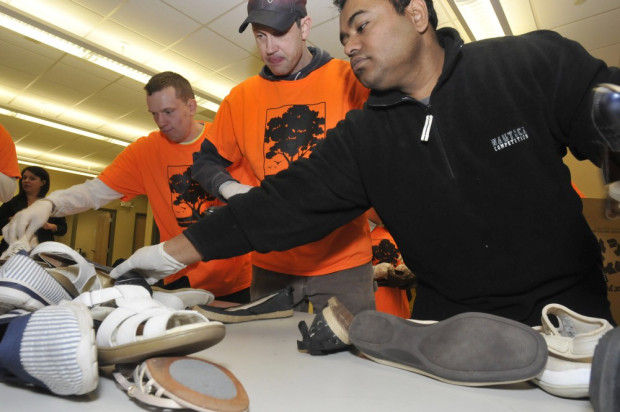 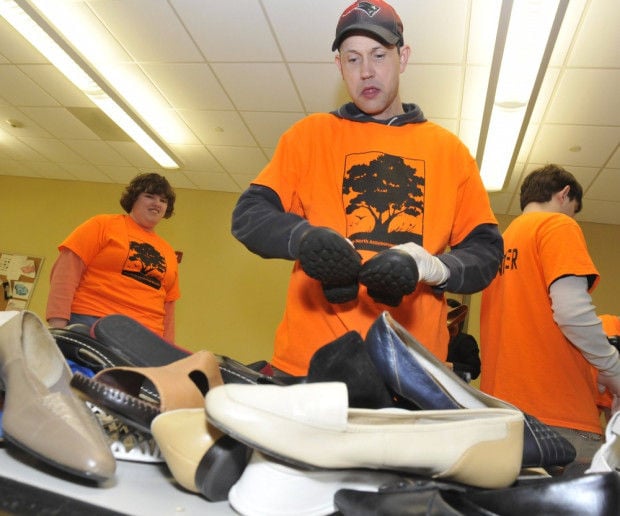 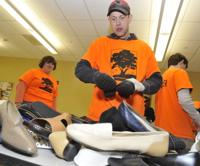 Sorting shoes are Allison Jordan of Rehoboth, left, and David Bunker of Attleboro at Attleboro Enterprises, where developmentally disabled adult volunteers run the “Shoe Box Recycling” program. to encourage recycling of old shoes so they don’t go to land fills.

Sorting shoes are Allison Jordan of Rehoboth, left, and David Bunker of Attleboro at Attleboro Enterprises, where developmentally disabled adult volunteers run the “Shoe Box Recycling” program. to encourage recycling of old shoes so they don’t go to land fills.

You might think that the folks in North Attleboro who organize the yearly cleanup day in the spring wouldn't be active in the winter, but you'd be wrong. At a time when snow covers the ugly litter and trash that people toss out of cars and on the side of the road, Keep North Attleboro Beautiful has teamed up with a local nonprofit to increase recycling in town.

And we think that's a good idea - a very good one, indeed.

In case you missed Staff Writer Andrew Doerfler's story earlier this month, Keep North Attleboro Beautiful has partnered with Attleboro Enterprises, a North Attleboro-based agency that finds job opportunities for adults with developmental disabilities, in an effort to keep gently-worn footwear out of landfills and to give them instead to people who can use the shoes.

What the groups have done is to arrange spots around town, such as the schools and Town Hall, where people can drop off their unwanted shoes. Attleboro Enterprises' workers then collect and pack them up for donation. "We take it all in, and decide what's usable and appropriate to send out," said Shelley Jutras, director of development at Attleboro Enterprises.

At a time when Attleboro Enterprises has been shifting its focus away from assigning specific jobs in favor of promoting community-based day support, which prepares participants for work, the agency saw a call for volunteers that Keep North Attleboro Beautiful had put out through the United Regional Chamber of Commerce and responded. "The different projects were absolutely perfect for what we were looking for," Jutras said.

The arrangement has worked out well for both groups, with those who can use the shoes being helped. Many of the shoes go to the for-profit company ShoeBox Recycling, which provides materials to run the program and then sends the shoes for free or low cost to developing countries. Each box given to ShoeBox recycling earns $18 to $20 for Keep North Attleboro Beautiful. The effort also helps other charitable groups; for instance, since most of the countries are in warmer climates, winter boots and insulated slippers that are collected are donated locally. Shoes that can't be worn are sent to the Nike Reuse-A-Shoe program, which recycles rubber, foam and fiber.

The arrangement with Keep North Attleboro Beautiful has worked out so well, in fact, that Jutras said that Attleboro Enterprises is keeping an eye out for other non-profits for which adults with developmental disabilities can volunteer.

The groups aren't resting on their laurels, either as they aim to double the collection sites. "We'd love to be able say 'North Attleboro doesn't throw any shoes in landfills,' " Jutras said.

That would be a goal as admirable as in volunteer organization's name: Keep North Attleboro Beautiful.