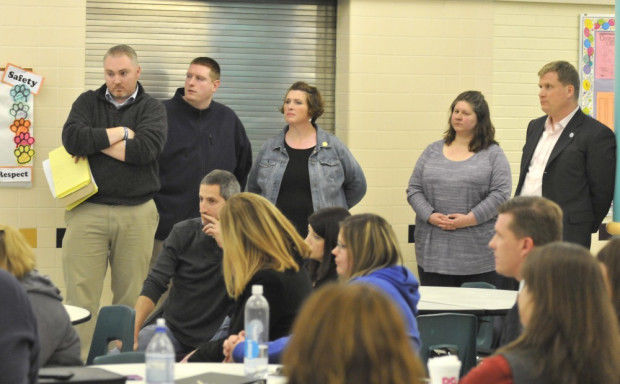 State Rep. Paul Heroux, D-Attleboro, far right, was with parents and teachers last week at Thacher Elementary School when they met with city officials about the school budget crisis. 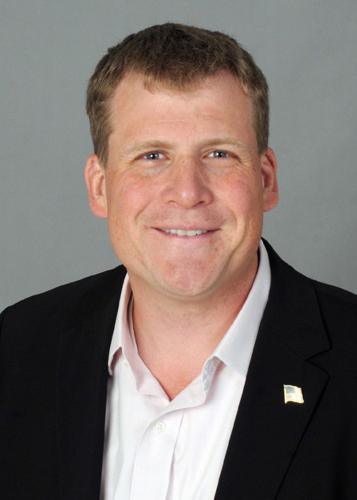 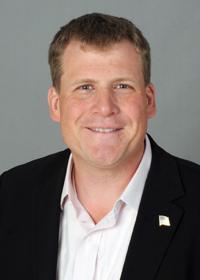 "It is not a crisis until it is a crisis" is what Attleboro High School teacher Toby Reed said to me on Friday when I visited some of his students doing a project on North Korea.

Over the past week, I met with the state's education department (DESE) and dug deep into the state's calculation of the foundation budget as determined by the Chapter 70 funding formula. I wanted to know why the increases the schools have been getting from the state have been erratic in recent years.

Here are some of my findings.

The school committee and school department have been circulating a Mass. Budget and Policy Center chart that shows that the state's contribution to school aid was going up until 2003, but then it has "stagnated" since 2003. Something about this didn't seem right to me, and I found statewide enrollment went up from 1993 until 2003 and then has remained fairly level since. So state aid has not stagnated by itself, per se, it has been correlating almost perfectly with student enrollment all along.

Specific to Attleboro, compared to FY16, for FY17, it is estimated that there will be 24 fewer students in Attleboro schools, which has resulted in Attleboro getting about $344,000 instead of about $600,000 it would have received if school enrollment stayed the same. Conversely, the year before, Attleboro added nearly 70 students, which helped contribute to the additional $1 million that we got. This enrollment pattern influencing school aid can also be observed in FY13, FY14, and FY 15. But student enrollment is only one variable. Inflation is another important variable in the formula.

If we include inflation, we use the previous calendar year's numbers. Inflation in 2015 was 0.1 percent, and combined with 24 fewer students projected for FY17 (done in 2016), it helps explain why our budget for FY17 has lower growth, adding only $344,000 over the previous year. Fewer students + low inflation = less money = crisis.

By comparison, in 2014, inflation was 1.6 percent. In 2015 we added nearly 70 more students for FY16, resulting in the FY16 budget adding $1 million over the previous year. More students + higher inflation = more money = no crisis.

Another variable that is used to calculate the foundation budget is the "municipal revenue growth factor." This has been fairly level in recent years, but overall trending up since FY10, which the formula takes to mean that the municipality should also be trending with an ability to contribute a bigger percent of the foundation budget.

Another factor is the manner in which overall there is a trend for the "local effort from income" driving up the overall "combined effort." What this means: Slightly rising incomes in Attleboro are resulting in the formula determining that a bigger share can and, by design, should come from the municipality.

Adopting the foundation budget review commission recommendations, especially concerning school health care and special education expenses, could cost anywhere from about $500 million to over $1 billion. That enormous amount of money has to come from somewhere. It could be a tax hike, program cuts or a combination of both. However, Gov. Charlie Baker, House Speaker Robert DeLeo and House Ways and Means Chairman Brian Dempsey all have said raising taxes isn't an option at this time. Senator Richard Ross recently told me that when he was a state rep back in 2006, House leadership told him that revising the foundation budget could be the issue that could "break the state budget."

Additionally, if we try to cut other state programs there is going to be pushback because there will be winners and losers. After the commission released its report, Speaker DeLeo said that weighing potential effects on different municipalities makes changing any formula "one of the most difficult things to try to get done in the Statehouse."

If we adopt a change to the way the foundation budget is calculated, we all know the state will be on the hook for more money. The startling thing is that the city will also be on the hook to put up more money, and it could be of the magnitude that the city can't afford. So there are consequences to changing the current formula (and consequences to keeping it). If we adopt formula changes right now, the only way that additional money could be allocated at either the state or city level would be to phase in the changes over time, which will still leave Attleboro schools in a crisis right now and perhaps in FY18. By one measure, if we adopt certain foundation budget recommendation changes, 69 school districts contribute less but the rest contribute more, including Attleboro. That is a big problem.

Lastly, there has also been some confusion about the new versus old poverty numbers. The Mass. Budget and Policy Center gave a presentation at the Statehouse in February and said that the new definition of poverty numbers hurt, not help. It was a generic statement. Most people took it to be true across the board, but it is not. After a school committee member suggested to me that Attleboro would gain $40,000, I checked with DESE. As it turns out, some districts are helped; Attleboro is one. Additionally, DESE informed me of other reasons for the need to use the new poverty definition for all districts.

My goal here was to provide some analysis on information that I obtained from DESE about some of the reasons that the growth in state aid to our schools has been erratic in recent years.

I have been saying it for a long time. We can afford anything, but we can't afford everything. What we spend our money on is a reflection of our priorities. There are solutions to this crisis needed at the state, city, and school levels. No one level of government is immune.

Paul Heroux of Attleboro, a Democrat, is the state representative for the Second Bristol District. He can be reached at PaulHeroux.MPA@gmail.com.