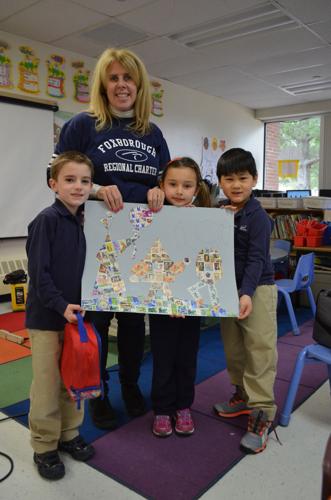 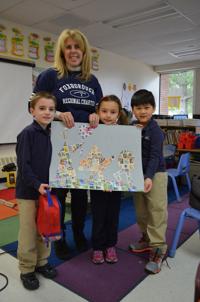 The kindergarten students in Heidi Solivan’s kindergarten class at the Foxboro Regional Charter School are making a stamps collage in connection with the school’s Holocaust Stamps Project. The collage correlates with their year-long study of “Community” and carries the theme of “Different People, One World Community - Celebrating Our Diversity. Pictured, from left, are: Ryan Scammon, Agustina Aranes and Minhquan Nguyen. 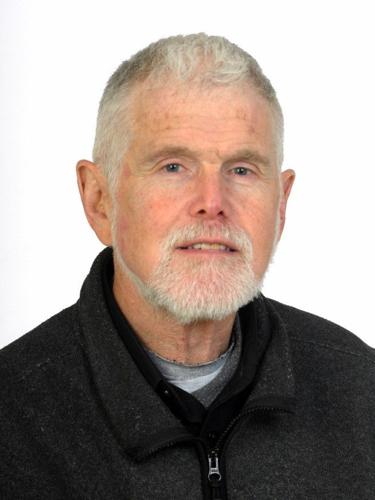 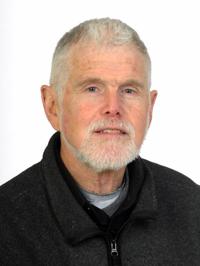 Here's an update of the Holocaust Stamps Project at the Foxboro Regional Charter School:

As readers of this column may remember, the students for several years have been collecting millions of stamps - more than 6 million at last count - with the goal of collecting 11 million to recall all the victims of the Holocaust, who were ruthlessly slaughtered by the Nazis in Germany and across Europe during World War II.

The students have made various collages from the stamps, and according to the project's founder, retired teacher Charlotte Sheer, one of the latest accomplishments has been a project by the kindergarten students in Heidi Solivan's class.

"The dancing figures are made of geometric shapes to help promote reinforcement of math concepts, and people stamps from all over the world are being used to fill in the human-like forms, thus promoting the world's wonderful community of diverse cultures," Sheer wrote.

The balloon held by one of the figures is made of Love stamps as well as stamps bearing the images of doves, which continues the pursuit of world peace theme that's woven throughout the stamps collage series.

The collages that the students have been working on are more relevant than ever given the renewed anti-Semitism in Europe and elsewhere, as well as the heightened threat from extremists who consider human life cheap.

That and other students' collages were on display during an open house on the project held earlier this month. To find out more about the project, email outreach@foxboroughrcs.org.

The fifth annual Alumni Gathering, which will be held at the 86 Park St. museum from 7 to 9 p.m. Tuesday, May 17, is for all AHS graduates. The event is a mini-reunion, where classmates can meet to reminisce, network, browse old editions of the Tattletale, and be entertained by a sneak preview exhibit of the museum's High Art 2016: Music to the Eyes exhibit, which will be open to the public the next day.

According to Viveiros, the gathering will feature these two distinguished graduates: Michael DiRenzo, New York City-based photographer (Class of 1968), whose pictures of the United States grace the front page of The Sun Chronicle on or around the Fourth of July yearly; and Meagan Fuller, Miss Massachusetts 2015 (Class of 2010). DiRezno's photos will be featured at the museum in May. Info: To find more, go to The Real Attleboro High School Alumni Association.

One of the best things about a community newspaper like The Sun Chronicle is that chances are very good that you'll see a word or two about a neighbor, friend or relative in the paper when you pick it up. That adage rings especially true for subscribers who are also editors.

Last week, the story that I put on a City & Town page about a North Attleboro native who won a prestigious award from NASA - the Space Flight Awareness Silver Snoopy Award - proved that point. The recipient, Neil Toupin - an aerospace engineer at NASA's Stennis Space Center in Hancock County, Miss., who was honored for managing a foreign debri program and preparing and executing engine test - grew up on my street in North Attleboro.

Toupin, who now lives in Slidell, La. has made NASA, his family - and his old neighborhood - very proud.

* The 2016 Attleboro Open Singles Horseshoe Tournament sponsored by the recreation department will be held June 1 at South Attleboro Veterans Memorial Playground (Lees Pond). If a qualifier is needed, the championship round-robin will be held June 8. Registration will begin at 4:45 p.m. with play at 5:15 p.m. Info: 774- 203-1889, ext. 5 or visit cityofattleboro.us/rec.

* Registration is under way for the city's annual Attleboro Tennis Tournament, which is open to all area residents and has divisions for men and women. There will be open and senior (50 and over) divisions.The singles tournament is June 6-12 and and the doubles tournament will be Aug. 5-7 at Attleboro High School. Registration forms are at cityofattleboro.us/rec. Click on tennis tournaments. Info: 774-203-1889, ext. 5, or Paul Perry at 508-223-6266.

* The recreation department has a limited number of $20 bleacher tickets to see the Boston Red Sox vs. the Colorado Rockies at Fenway Park on May 25. The seats are in section 42, rows 18-21. Gametime is 7:10 p.m. Five tickets per household. Info: cityofattleboro.us/rec and fill out the "Special Event" registration form on the homepage. Tim Killion at 774-203-1889, ext. 6.

LARRY KESSLER is a Sun Chronicle local news editor. You may reach him at lkessler@thesunchronicle.com.

KESSLER: Elie Wiesel would have been proud of Foxboro school's Holocaust Stamps Project